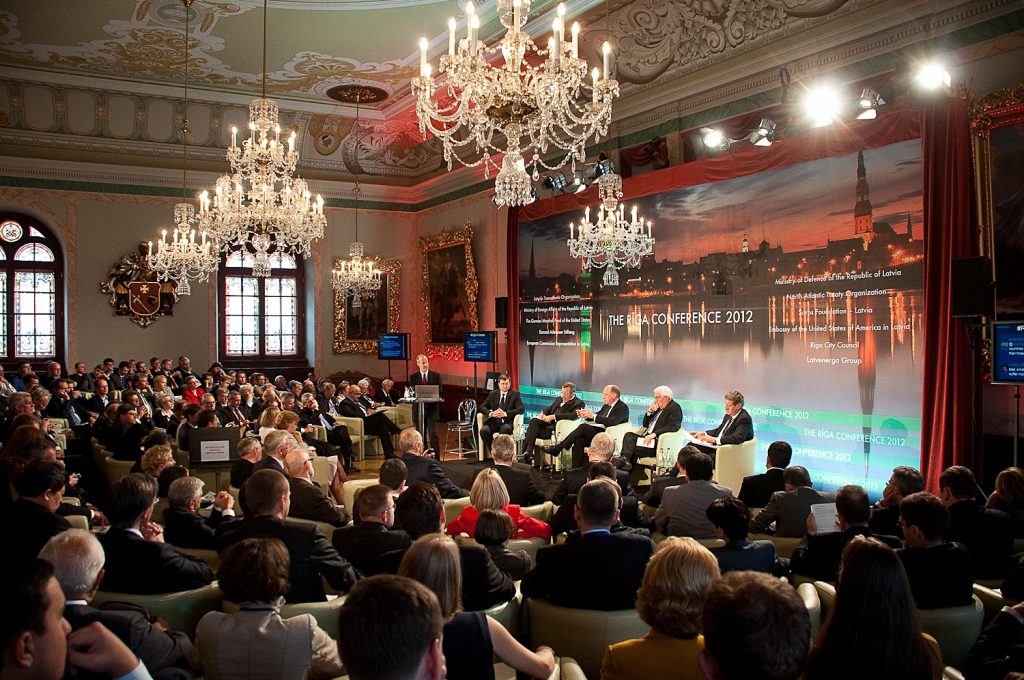 The Riga Conference is a jewel in the crown of security conferences. Yesterday I shared a panel with the Italian, Latvian and Norwegian defense ministers, together with Ambassador Sandy Vershbow, NATO’s US Deputy Secretary-General to discuss “NATO post-Chicago”. Did something happen in Chicago? I must have missed it.

The questions at hand were those great oxymorons of NATO speak; ‘smart’ defense (they have a good sense humor in NATO) and NATO enlargement. Being your faithful and ever heretical Blogonaut I of course ignored all that and asked a more direct question; can NATO pass the Riga test?

NATO is a bureaucracy, albeit a bureaucracy with attitude. In the absence of what was once called ‘leadership’ NATO is forced to search endlessly for a bureaucratic solution to the world by looking at it through the wrong end of a telescope. Sadly, if the good citizens of Riga are to sleep soundly in their beds NATO’s enforced small thinking will have to change.   Indeed, whilst I remain convinced NATO has and must have a big strategic future the Alliance must first confront a very big present and the most profound and rapid re-balancing of world power ever seen. In other words, NATO’s post-Afghanistan future is one in which China, Germany, India, Japan and, of course a very near Russia and an over-stretched America tussle to defense influence via soft and hard power.

Now, let me put aside the coming contest between established superpower America and coming superpower China, which was being enacted out by proxy this week over Rock-all in the East China Sea between Beijing and Tokyo. Let me focus rather on Europe’s two behemoths Germany and Russia.

The thing about power is that it is as unforgiving to those that have it as it is to those who do not. Just across the border from where I am writing an opponent of President Putin has been unceremoniously ejected from the Russian Parliament for being less than helpful to the Kremlin.  It is clear that President Putin’s world view is pretty ‘unreconstructed’ (to use the appalling non-speak of modern European academia). His world is one in which hard power is used to project soft power into spheres of great power influence and devil take the small-most.

Looking to the West between me and home is mighty Germany. Germany does not feel mighty and it tries very hard not to be ‘mighty’, but at least in European terms ‘mighty’ it is. And, behind the economic turmoil of the Eurozone crisis is the re-ordering of European power in Germany’s favor. A British diplomat recently told me an apocryphal story about being virtually pinned against a wall by a German diplomat and told in no uncertain terms that twice before Britain had thwarted Germany’s attempts to ‘integrate’ Europe and it would not happen again. Said German diplomat is probably right as Germany and France have successfully used the EU to neuter Britain. Thankfully, there are some very serious Germans thinking very seriously about all of this and trying to find a solution to all of this but Germany is having to learn leadership on the job,  Not easy,.

And then there are the Americans (Oh! Oh!). Twenty-first American grand strategy will demand a shift in both ambition and capability by Washington if it is to meet the coming Asia-Pacific challenges to the second American century with profound implications for the security of the honest folk of Riga.

NATO is today the rather slim piece of salami in this very particular power sandwich. Indeed, Riga is the crucible in which a new Alliance will either be forged or die (and why the next NATO Sec-Gen should perhaps come from the Baltic States).  Or, to put it another way, Riga’s credible defense demands a new strategic bargain between Washington and Berlin and given events elsewhere the possible re-structuring of NATO into the EUrosphere and the defense Anglosphere.

The alternative is a United States pulled progressively away from the defense of Europe by events elsewhere, a NATO that fades as a result and poor, little Latvia once again trapped between the Russian (planned) and German (not-so-planned) spheres of influence. History suggests that will not turn out well. Indeed, in the absence of a shared strategic concept with Washington Berlin will be forced to lead Europe towards an autonomous strategic defense. With Europe’s armed forces about to fall over a defense cliff that would hardly be credible.

The people of Riga need NATO and today NATO just about passes the Riga test. However, history never stops here and all the NATO allies must never forget that whatever the distractions NATO’s future will be decided not in Brussels or even Afghanistan, but right here in Riga. Riga cannot be defended by European complacency.