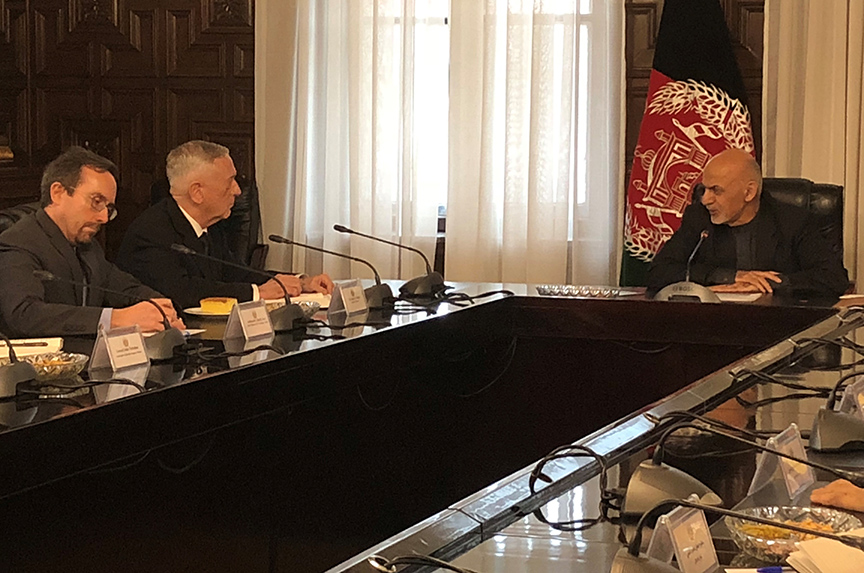 At a time when the Taliban are gaining ground in Afghanistan, Afghan government losses are mounting, and regional partners’ views on the conflict are shifting, US Secretary of Defense James Mattis has not given in to pessimism. On a September 7 visit to Kabul, Mattis expressed optimism about the existence of “a framework” and “open lines of communications” between US diplomats and Qatar-based Taliban representatives that he believes might lead to an intra-Afghan reconciliation process that would end nearly two decades of war. He also reassured Kabul’s leadership that the United States will stand by the Afghans until there is lasting peace and stability.

What remains uncertain at this point, however, are the answers to two overarching questions: How will key regional stakeholders—Pakistan, Russia, Iran, China, and India—manage shifting interests and threat perceptions at a time when the United States is pushing for a peace deal, and is there a contingency plan if talks fail?

These questions have become pertinent as the Taliban gains ground and may try to delay peace talks to increase its military and diplomatic leverage. Latest reports indicate that the “Taliban now heavily influence key segments of the ring road (Highway 1) entry points to main cities” of Afghanistan.

Mattis, accompanied by US Gen. Joseph Dunford, Chairman of the Joint Chiefs of Staff, met with Afghan leaders after attending meetings in New Delhi, where he was joined by US Secretary of State Mike Pompeo, who also held talks in Islamabad.

Pompeo’s exchange with Pakistan’s civilian and military leaders was meant to drive home American expectations that Islamabad play a more constructive role by helping bring the Taliban to the negotiating table.

Not satisfied with Pakistani foot-dragging, the Pentagon had earlier announced that it was seeking to suspend an additional $300 million in military aid to Pakistan (bringing the total to close to $900 million for this fiscal year) due to lack of “decisive actions” in support of Washington’s Afghan strategy.

After his meeting with Pompeo, Pakistan’s new prime minister, Imran Khan, at a military rally, reacted defiantly and stressed that Pakistan “will not become part of a war of any other country.”

Despite rising tensions, while in Kabul, Mattis highlighted direct contacts between US diplomats and Taliban representatives that were held in Qatar in July, pointing out that “reconciliation is no longer just a shimmer out there, no longer just a mirage.”

Acknowledging a dual-track US military and diplomatic strategy to bring the Afghan war to an end, Dunford said, “what we are trying to do in the military dimension is convince the Taliban that they cannot win on the battlefield and that they must engage in a peace process.”

To oversee the United States’ revised initiatives, two seasoned officials were recently put in charge of the military and diplomatic portfolios. Lt. Gen. Austin Miller, a special operations commander with previous experience in Afghanistan, took command of the US/NATO Resolute Support mission. At the handover ceremony in Kabul last week, he said, “there is no room for status quo. We cannot afford to be complacent.”

Also, Afghan-born Zalmay Khalilzad, a former US special envoy to Afghanistan and Iraq, has been introduced as the Trump administration’s special representative in charge of the reconciliation process. Not only will Khalilzad have to seek out influential pro-peace Taliban leaders, he will also have to consult with Kabul and, perhaps, engage key capitals as part of broader diplomatic efforts —at the minimum to explain US objectives in order to avoid misunderstandings and minimize the potential for pushback or spoiler activities.

For now, Washington must put the onus on Pakistan. The United States has asked that Islamabad “help in encouraging, persuading, pressuring Taliban to come to the negotiating table, deal with the national unity government… and talk about a future where they are included, not through force, but through a political process.” US officials have warned that Pakistan’s bid to seek an estimated $12 billion from the International Monetary Fund may be on the line.

Meanwhile, regional stakeholders continue to closely follow the developments in Afghanistan  with their own shifting geopolitical priorities in mind. The post-9/11 international consensus on Afghanistan has frayed. It will now be important for diplomats to find new common ground in the fight against terrorism, as well as to agree on how best to assure Afghan stability and security either as part of a broader intra-Afghan peace process or otherwise.

The same challenge—weakened post-9/11 political consensus—is also evident within Afghanistan as the country faces parliamentary and presidential elections over the next few months. The incumbents and a growing field of disenchanted opposition groups have yet to agree on key modalities and reforms to assure a broadly legitimate outcome at a time when peace overtures are further complicating the timing, sequencing, and application of a compounded political transition.

While pushing for a comprehensive political settlement, complexities associated with internal political dynamics and regional posturing add to the levels of fluidity and uncertainty. It is, therefore, imperative to have contingency plans in case talks are delayed or thwarted. A Plan B would be the least all parties could do in order to prevent a further debacle.

Omar Samad is a former senior strategy adviser to the national unity government in Afghanistan and ambassador of Afghanistan to Canada and France. Follow him on Twitter @OmSamad.