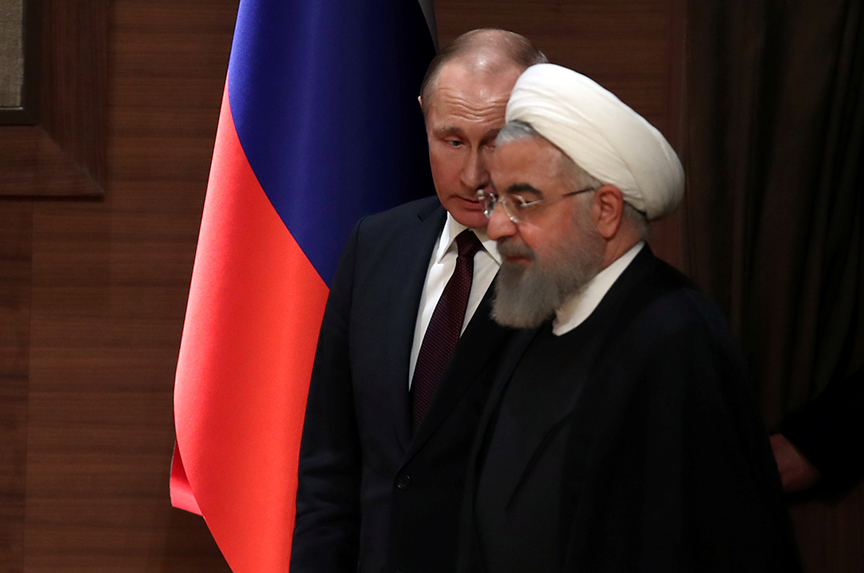 Victory in war often brings with it unforeseen challenges and obligations.  Russia is now learning that to sustain its victory in Syria’s civil war it must play a role as an arbiter or honest broker between Iran and Israel lest their rivalry explodes into large-scale combat, engulfs the entire region, and undermines Russia’s newly-acquired position there.  Such a war would utterly confound Russia’s interest in stabilizing a post-civil war Syria under Bashar al-Assad and retaining the bases and lucrative contracts it has won as well as its regional status as a key superpower without whom nothing can be accomplished.

Apart from the destruction it would wreak, an Iran-Israeli war would consume Syria, bring the United States back to the Middle East in a big way, and force Russia to choose between the two states against its own preferences.  In other words, this war could wipe out all of Russia’s recent gains from its intervention in Syria.

That could happen sooner than anyone expected. While Moscow is interested in stabilizing Syria and possibly reforming Assad’s government to achieve domestic stability, Iran defines its vital interest as ensuring that Assad rules all of Syria as an Iranian client state where it could deploy forces in an unbroken road from Iran to the Mediterranean.  That not only terrifies Sunni regimes that would become targets of even greater Iranian pressures and threats, it also directly threatens the existence of Israel.

Therefore, Israel has not only struck preemptively at Iranian anti-aircraft sites and bases in Syria, Israeli officials have also loudly and insistently warned that they will strike Iran first before it can obtain bases in Syria from which to incite terrorist attacks and direct strikes upon Israel.

Jonathan Schanzer of the Foundation for Defense of Democracies reports that Iranian regular military forces, the Islamic Revolutionary Guard Corps, its proxy Hezbollah, as well as scores of other Shi’ite militias that have pledged allegiance to the Islamic Republic of Iran have all recently entered Syria.  While Israel has struck more than a hundred targets in Syria in the past year, that is only a fraction of available targets. Meanwhile, Iranian forces have so deeply penetrated Syria and made Assad dependent upon them that he cannot counter these movements despite the risks he knows they carry for Syria.

Consequently, Moscow, which has strong ties to both Iran and Israel, must now pledge to Israel that it will restrain Iran and must undertake to do so lest it be exposed as a fake great power.

Yet, simultaneously, Moscow will clearly support Iran against any American or Western effort to undo the 2015 Joint Comprehensive Plan of Action (JCPOA)—the nuclear deal with Iran.

Moreover, Iran and Russia are deeply enmeshed in sustaining Assad. Moscow has not countered any Iranian initiative since entering Syria at Iran’s behest in 2015.  While formally they are hardly allies, on the ground they function in tandem. Strong Russian interests now exist around that partnership.  Furthermore, it is very doubtful whether Moscow can exercise sufficient leverage upon Iran to not threaten Israel since the identity and raison d’etre of  Iran’s government are bound up with championing an anti-Israel cause throughout the Middle East and pledging  to extirpate Israel.

Israel, for its part, may also be riding the Iranian threat hard for domestic purposes to consolidate Prime Minister Benjamin Netanyahu’s domestic support and his coalition government and to induce the United States to do what Israel would like to do but cannot do, namely engender if not regime change then at least a major containment of Iranian power, something that finds great favor with Sunni Arab states, too.

Moscow’s Middle East policy, a pillar of which is its ability to deal on partnership terms with everyone, is and no doubt will further be caught in these crosswinds.  But it has no way out since its victory in Syria has saddled it with the onus of playing the honest broker —a thankless task as Bismarck learned after 1878—between increasingly irreconcilable rivals.

Since Israel regards its survival as bound up with eliminating or at least deterring the Iranian threat, Iran’s stated identity is bound up with eliminating Israel, and both sides’ vital strategic interests are directly opposed to each other these facts make their rivalry among the more intractable issues in an already excessively violent region of the world.  Israel is clearly bringing direct pressure on Moscow and indirect pressure through its ties to Washington to impose restraint on Iran. But Moscow has not even tried to restrain Iran’s agenda until now in the Middle East and cannot afford to lose Iran as a partner.  Thus, Russian President Vladimir Putin may have been obliged to accept what will prove to be a fruitless task that could put the gains of his victory in Syria at risk if Russia fails to prevent direct confrontation between Iran and Israel.

The late Zbigniew Brzezinski called today’s Middle East the Eurasian Balkans. The situation described here clearly resembles that of the Balkans after Bismarck tried to play the honest broker at the Congress of Berlin in 1878.  St. Petersburg left that congress dissatisfied and feeling betrayed.  Afterwards, Bismarck and his successors found it ever harder to play the role of broker between Vienna and St. Petersburg until his successors abandoned their efforts in the 1890s with fateful consequences.

Similarly, it will be very difficult for a Russia that has aligned itself with Iran in Syria and regards this partnership as a cornerstone of its policy to impose restraint upon it to preserve regional peace and Moscow’s flourishing ties with Israel.  Moscow may yet find itself trapped in complications that it cannot resolve and that rather than becoming a great power arbiter in the Middle East, it is instead riding a tiger that is wholly out of control.