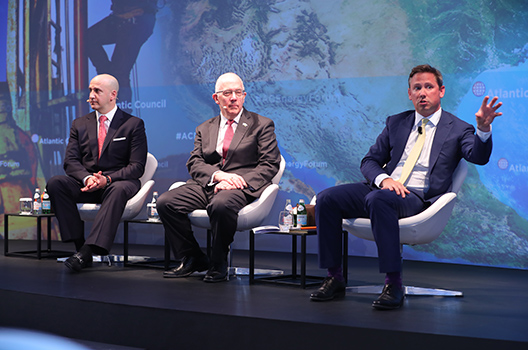 Although US shale production reached 11.7 million barrels per day in 2018, shale oil and natural gas experts caution that the days of rapid expansion for US shale could be numbered as concerns mount about global economic growth in the short-term, easy access shale sources are depleted, and capital markets decrease their investments.

“The US shale story has been one of the biggest disruptors of global energy markets,” according to The National’s energy reporter Jennifer Gnana, but its rapid growth could be beginning to slow.

Speaking on a panel at the Atlantic Council’s 2019 Global Energy Forum in Abu Dhabi on January 13, Thomas Marchetti, president of Energy Intelligence, said market analysts are expecting growth in shale production in 2019 “ratcheting down probably by at least 300,000 or 400,000 barrels a day.” Marchetti said this is due in part to the “erosion of quality inventory and resources, because you are depleting high-quality resources as you are moving out the fringes of the core areas.” Any increase in cost in acquisition of shale oil in the United States, which is already considerably more expensive than traditional crude oil, could weaken shale’s competitiveness in the global market, Marchetti warned.

For Adam Sieminski, president of the King Abdullah Petroleum Studies and Research Center, the much larger concern is a general slowdown in the global economy. “If there were to be an economic slowdown of the kind that we had in 2008-2009,” he said, “the impact that that would have on demand could be devastating.” As the United States and China continue to grapple over tariffs, Sieminski warned “concerns about the outlook for trade [could] erode consumer and investor confidence and that would lead slowdown in spending and investment that would then slow down gross domestic product. . . [The] impact on demand would be a concern for everybody” in the oil market.

Thankfully, according to Venture Global LNG Chief Commercial Office Thomas Earl, the US-China trade war that has seen Beijing slap tariffs on US liquefied natural gas (LNG), “has not stopped any of the work product and the number of people working on LNG products. The work has gone ahead just at the same accelerated pace that was going on before.” This is due in part, Earl argued, by the fungibility of US LNG, which allows the market to be “so active in terms of the ability to swap and create physical swaps, that. . . the tariff itself has not affected the physical spot trading market or the overall demand of the market.”

On the shale oil side, Marchetti conceded that the tariffs have “certainly had an impact” as Chinese imports fell. Despite this, he still believes that “there is going to be very positive and constructive agreements met in the near term. . . the circumstances right now are too dire for both economies that they have to find something that’s amenable and they will do so.”

In addition to global demand concerns, there is concern that the US domestic market for shale oil and gas is not strong enough to sustain continued fast pace production growth. As Sieminski explained, there is limited demand for shale gas and some light shale oil, except for select industries such as petrochemicals. “The power market,” he added, “is really going to be dominated by renewables over the next ten years, and not so much gas.” Earl agreed, noting that “the growth markets for gas in the US are largely limited to LNG export. The power sector is not growing [and] the domestic use of gas is not particularly growing.”

International markets, the experts agreed, will therefore be key to shale’s further growth. Earl argues that there is strong demand for US shale LNG in Asia, not just in China which is making a well-publicized shift to LNG from coal, but also in places like Thailand “where indigenous pipe gas production is in significant decline and needs to be replaced by LNG.” Marchetti added that Europe will be an important market for shale crude oil moving forward as its production capacity drops, while cautioning that “the potential for revival for domestic exploration projects” in Asia “could crowd out some of the demand for LNG delivery.”

US shale production will still be uniquely competitive in a global shale market, however, as it has a very unique “ecosystem,” Marchetti said, including state of the art logistics, a highly-skilled workforce, and geological conditions that all help keep costs low for US producers. This ecosystem is the subject of a new report by Atlantic Council Global Energy Center Senior Fellow Ellen Scholl, The Future of Shale: The US Story and Its Implications. The report, released in Abu Dhabi on January 12, examines the shale industry in Texas to determine the precise conditions which enable the dramatic rise of US shale.

Marchetti also warned that falling oil prices and concerns about returns could cause capital markets to lessen their portfolios in shale after years of heavy investments. “The growth rate [of shale production] is going to moderate and moderate at an accelerated pace,” Marchetti predicted. “2019 is not going to change much. 2020 will see a much more dramatic drop off in capital spending.”

For Sieminski, the key to extending the rapid growth of US shale will be harnessing new technologies to make harder-to-reach shale deposits more accessible and raising the success rate of shale recovery. Should these technologies be adapted, he argued, the deep reserves of shale deposits in the US means that the “opportunity set for that being a continuing sustainable business is very high.”