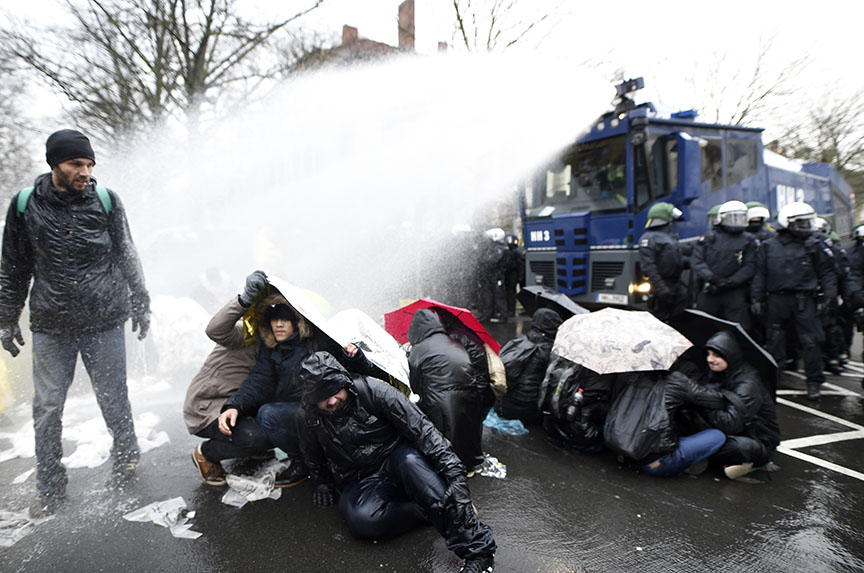 An unholy alliance of Russia, the Islamic State, and far-right Western politicians and political movements is threatening democracies in the West.

The Western populists—playing off fears created by the Islamic State and cooperating both formally and less openly with Russia—seek to move democracies in the West away from a political system that is based on the rule of law and toward a more centralized system.

The irony, of course, is that these politicians, including US President Donald J. Trump, claim to represent the common man while projecting themselves as the only answer to the issues that trouble the average citizen. They then proceed to eliminate limits on their power, including a free press and an independent judiciary.

The West needs a political strategy to respond to this challenge.

The threats posed by Islamist terror and Russian aggression present themselves in very different ways. They have one thing in common: both seek to create political and economic chaos in the West, undermining Western economic, political, and security systems and, in extremis, creating a new world order in which the West is not the dominant player.

In a time of transatlantic traumas, both threats have worked diligently and with some success. Islamist terrorism has already changed the way of life in the West, ranging from the much more pervasive security measures encountered almost everywhere, to dealing with the overwhelming flow of refugees from the war-torn Middle East, to the destabilizing British plan to leave the European Union. Trump used fear of Islamist terrorism to motivate supporters on his way to the presidency.

Covert Russian action, meanwhile, has disrupted US democracy and perhaps even helped Trump win the presidency.

Besides the Russian and Islamist threats, storms were brewing on several home fronts as well in the West. A surge in what has been called “populism” gave new life to a variety of right wing political parties or candidates that have played on otherwise legitimate popular fears and concerns. They advocate simplistic approaches that challenge the assumptions of established Western liberal democracy. Such politicians and parties have thrown around their political weight in several countries, exercising power in some, including the United States, Hungary, Poland, Switzerland, and Turkey.

There is no single explanation for rising scepticism about liberal democracy. A combination of factors has produced a general sense of malaise. The Great Recession, which started in 2008, left millions of Americans and Europeans without jobs and in debt. While the job market has recovered, real wages have not, and a significant portion of European and American voters believe that the system and its leaders have let them down.

Another factor is concern that refugees, driven from their homes by conflicts in the Middle East and elsewhere, will not only bring violent terrorist attacks to Western states but will also threaten economic well-being, particularly of those who are already suffering the most from the residual impacts of the Great Recession.

There is also a perception that the process of European integration, expanding international trade, and globalism are undermining the way of life of average citizens. This perception is aggravated by the fact that the share of wealth in Western democracies held by the “one percent” continues to grow.

Some are concerned that governance appears to be moving further and further away from local and individual control, whether due to EU regulations in Europe or Washington bureaucracy in the United States.

Finally, the pace of life and development of technology have moved faster than the ability of many citizens to adjust to or even comprehend, making more people feel disenfranchised and disadvantaged.

As a result, extremist political movements throughout Europe, and in the United States, found greater public resonance for their attacks on Western unity, and even the validity of a Western identity. These troubling internal divisions—within and among Western states—could combine with the external threats to form a perfect storm. That storm could blow away transatlantic unity and, with it, the definition and reality of “the West.”

How can we best defend liberal Western democracies against today’s threats?

While failure to deal successfully with the challenges to Western values could have a devastating impact on security cooperation among NATO and EU states, most of the necessary steps are not to be found in the realm of security policy, but rather must emerge from political, economic, and financial system reforms.

If these reforms succeed, popular support for defense spending and measures to strengthen counterterrorism will come as a derivative product as people will see that “the West” and its values are worth defending.

Perhaps this falls into the category of “easier said than done.” But the potential cost of failure could be regression into some sort of contemporary “dark ages” dominated by authoritarian regimes supported by the wealthiest individuals and corporate interests, in which Putinism could become the norm rather than the exception.

Today, the challenge is to improve the West’s democratic systems and institutions while providing sufficiently strong defenses against external threats—in the contemporary period against both Russia and Islamist terrorism.

These two tasks have in many ways become thoroughly interwoven. Russia seeks to use our open democratic systems to influence electoral outcomes to favor its interests while the Islamic State and similar groups use the freedoms presented by liberal democratic systems to engage in attacks against those systems.

As retired US Army Gen. David H. Petraeus testified before the US House Armed Services Committee in February 2017, “President Putin… understands that, while conventional aggression may occasionally enable Russia to grab a bit of land on its periphery, the real center of gravity is the political will of major democratic powers to defend Euro-Atlantic institutions like NATO and the EU.”

American and European political centers must become forces for constructive change and then demonstrate the will to make it happen. Atlanticists must act as the centrist populists of the West—those who subscribe to Western values and work together to defend them.

Stanley R. Sloan is a nonresident senior fellow in the Atlantic Council’s Scowcroft Center for Strategy and Security and a visiting scholar in political science at Middlebury College. This article is based on his new book, Transatlantic Traumas: Has Illiberalism Brought the West to the Brink of Collapse?

Image: German police used water cannons against protesters who rallied against the anti-immigration Alternative for Germany (AfD) party in Hanover, Germany, on December 2, 2017. The AfD is the largest opposition party in Germany's parliament-the Bundestag. (Reuters/Fabian Bimmer)