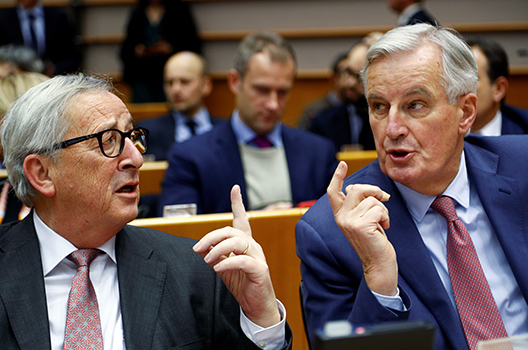 As British Prime Minister Theresa May packs her bags to go to Brussels once again, European leaders could be forgiven for thinking this “looks like Groundhog Day,” Bart Oosterveld, the Atlantic Council’s C. Boyden Gray fellow on global finance and growth and director of the Global Business and Economics Program, said.

May pushed through a provision in the British Parliament on January 29—the Brady Amendment—which formally states Parliament’s opposition to the current draft Withdrawal Agreement laying out the terms of the United Kingdom’s exit from the European Union over concerns about the “backstop” provision meant to avoid a hard border between Northern Ireland and the Republic of Ireland.

The Brady Amendment specifically instructs the British government to try to get the EU to find “alternative arrangements” to the Irish backstop, which hardcore pro-Brexit Conservative MPs and the Northern Irish Democratic Unionist Party worry could trap the UK under the EU’s economic rules for decades or could require customs checks between Northern Ireland and other parts of the UK.

While May has “bought some time” and “kept the Conservative Party together” with this amendment, “the chances of getting substantive changes to the Withdrawal Agreement and to the Irish backstop… do not look great,” according to Peter Westmacott, a distinguished ambassadorial fellow at the Atlantic Council and former British ambassador to the United States.

My message to PM @theresa_may: The EU position is clear and consistent. The Withdrawal Agreement is not open for renegotiation. Yesterday, we found out what the UK doesn’t want. But we still don’t know what the UK does want. #brexit

The reaction in Europe to May’s latest attempts to achieve revision of the Withdrawal Agreement “was one of exasperation,” Oosterveld said. “This is not the first time Theresa May has gone back to Brussels or other EU capitals to talk about the draft agreement again,” he explained. The last thing EU leaders want to do right now, he continued, “is engage in a game of chicken with the clock ticking down towards March 29,” when the UK is set to leave the bloc.

It still remains unclear what “alternative arrangements” actually exist to solve the Irish border question, Westmacott argued, while Oosterveld pointed out that “there is a fear in Brussels that reopening part of the agreement is reopening a Pandora’s Box” that will see other member states attempt to renegotiate parts of the deal they dislike, such as Spain over the issue of Gibraltar.

It is very likely, both Oosterveld and Westmacott argued, that May will return from Brussels empty-handed, in part because the EU’s hand is much stronger than London’s. “Despite the different perspectives and interests that the individual member states of the EU bring to this table, they have been remarkably disciplined in maintaining a single unified negotiating stance,” Oosterveld explained. This contrasts greatly with May, who represents a Conservative Party and a Parliament that “isn’t quite clear about what it does want,” according to Westmacott.

While it is doubtful if May will be able to adequately change the current Withdrawal Agreement, both Oosterveld and Westmacott suggested that the UK Parliament is much closer to ruling out the potentially damaging no-deal Brexit scenario. One of the primary reasons the Brady Amendment passed, Westmacott posited, “was that members of Parliament were told that on February 14… they are going to get another chance to vote on the question of possibly outlawing no-deal Brexit.”

MPs rejected an amendment by Labour MP Yvette Cooper that would have required the British government to seek an extension if there was no deal in place by February 26 but passed another that signaled Parliament’s desire to avoid leaving the EU without a deal. According to Oosterveld, “an amendment like the Cooper Amendment, which rules out no-deal Brexit, is more likely to pass mid-February than it was yesterday.” Such a vote in February “would send a big relief signal to global markets,” he said. “The outcome that is predictably bad for the British economy mostly, but also the global economy, is no-deal Brexit.”

The most likely scenario at the current moment, both Oosterveld and Westmacott maintained, is that there will be some sort of delay for the official Brexit date after March 29. “There is a strong sense in both the business community and policy community in Brussels and elsewhere on the mainland, that it is not a question about if there will be an Article 50 extension or delay, but how long will it be,” Oosterveld said.

An extension of the Article 50 withdrawal process would require the approval of all of the member states, Oosterveld cautioned, and for most European leaders “the delay has to have some functionality” in getting to an actual deal. This could be a return to the original Withdrawal Agreement, an attempt to get Parliament to support continued UK participation in the EU’s customs union, or even a second referendum.

Both Westmacott and Oosterveld cautioned that the extended timeline and complexity of a second referendum made such an option doubtful, but Westmacott conceded that “if Parliament finally cannot come to terms with a form of Brexit and we are faced with the risk of crashing out, which the vast majority of Parliament and most of the British people think would be insane, then I think the issue of legislating for another referendum comes back into the frame.”