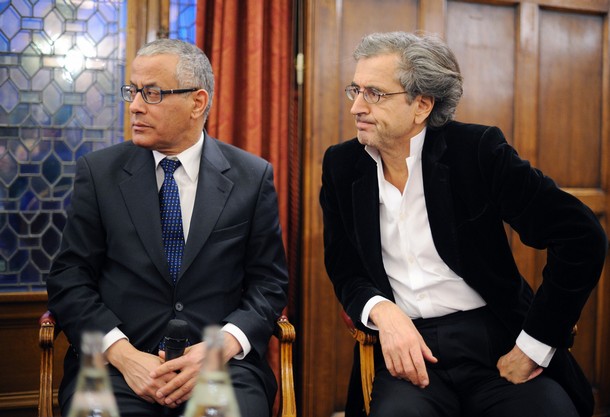 No sooner did Libya’s ragtag army of anti-Gadhafi insurgents retreat along the Mediterranean coast toward Benghazi than France’s SSP 1 chartered a Falcon executive jet to meet with dissident leaders.

On board was the "Shameless Self-Promoter," as he is known, who frequently makes headlines in the French media as BHL — Bernard-Henri Levy.

After two days in Benghazi, Levy called the Elysee Palace and was immediately put through to French President Nicolas Sarkozy. Levy told him that he had checked out the Libyan insurgency leaders, that they passed the smell test and needed immediate backing. The best target, he explained, were the forces loyal to Libyan leader Moammar Gadhafi now speeding toward a defenseless Benghazi.

Sarkozy, now hustled by the far right and losing ground to the anti-immigration party of Marine Le Pen (succeeding her 82-year-old father Jean-Marie Le Pen), eagerly embraced Levy’s advice. The new French Foreign Minister Alain Juppe was appalled he had been bypassed by the "mediagenic Levy."

Sarkozy ordered the French air force to standby for immediate action. The 22-nation Arab League had voted in favor of NATO intervention. And no sooner did the U.N. Security Council endorse the NATO option on March 18 than French warplanes took off — and were the first to drop bombs on Gadhafi’s tanks heading east along the shore road.

The original founder of the "Nouveaux Philosophes" in 1976, the now 62-year-old Levy took the lead of a small group of disenchanted intellectuals who fiercely attacked the moral bankruptcy of Communist and Socialist dogmas. His unchanged sartorial trademark is still designer black suits and open neck white shirts with three top buttons undone.

Levy was the first to speak out against Serbian concentration camps in the Bosnian war of the 1990s.

Inheriting several hundred million francs from the sale of his late father’s company, he spent months investigating the 2002 killing of Wall Street Journal reporter Daniel Pearl, beheaded by Islamic extremists, when Levy was visiting Pakistan as a special envoy of President Jacques Chirac.

Levy’s book "Who Killed Daniel Pearl" concluded Pearl was executed because he already knew too much about the links between the Inter-Services Intelligence, Pakistan’s intelligence agency, Pakistan’s nuclear scientists and al-Qaida.

These were mostly suppositions presented as fact and Levy’s book was criticized for being neither journalism nor philosophy but attempting to be both. Pearl’s wife Mariane called Levy "a man whose intelligence is destroyed by his own ego." Yet Levy’s suppositions had the ring of authenticity.

He writes weekly columns and regularly maintains his SSP status with the kind of splash he made in Libya last month. In 2006, for example, he co-signed with Salman Rushdie and others, "Manifesto: Together Facing the New Totalitarianism." This was a response to worldwide violent protests around the Muslim world to a Danish cartoonist’s satirical depictions of the Prophet Mohammed.

Last year, he shocked his co-religionists by defending Popes Pius XII and Benedict XVI against a barrage of Jewish attacks. But in 2008 he was also targeted for assassination by an Islamist group in Belgium whose leader, Abdelkader Belliraj, was arrested on unrelated murder charges.

The author of 19 books (10 available in English), Levy’s sponsorship of who’s in charge in Benghazi in what is now a civil war against Gadhafi’s regular army of Libyan units commanded by two of his sons and sub-Saharan African mercenaries, may be wide of the mark.

To begin with, Gadhafi has regrouped his forces inside major towns on the road to Benghazi. They can’t be bombed by French or other allied planes without inflicting major civilian casualties. Germany and Italy are against any bombing.

London says the NATO command structure (now globocop bifurcated between Afghanistan and Libya) is in charge while Paris plugs "a contact group of nations," names not specified. And the Arab League is rapidly growing disenchanted.

The Western coalition has deployed sufficient power to make sure Gadhafi cannot crush the revolt but not enough to remove him from power. Eventually one side is going to tire. The United States, Britain and France cannot afford to run up large war costs.

Gadhafi is sitting pretty with at least $70 million in cash and $7 billion in gold bullion — enough to keep his troops and African mercenaries happy. All the signs spell stalemate.

Saddam Hussein survived the first Gulf War in 1991 and lasted until the United States invaded in 2003. He was captured in a spider hole eight months after the fall of Baghdad and later tried, condemned to death and executed.

The United States, Britain and France aren’t prepared to wait indefinitely. In that case, boots on the ground will be needed. But domestic opinion in all three countries is against it.

Can’t we arm and train the rebels in Benghazi to do the job with allied air power? Not as long as Gadhafi holds the cities. The loss of civilian life would turn the Arab world against the Western powers.

Besides, no one is really sure we’re on the same wave length as the rebels’ 11-member National Council, notwithstanding Bernard-Henri Levy’s enthusiastic endorsement.

This council includes former Libyan mujahedeen veterans of the 1980s war against the Soviet occupation of Afghanistan who went on to volunteer for Osama Bin Laden’s al-Qaida. There is also the Libyan Islamic Movement and its 12-member Politburo that has sworn allegiance to the National Council in Benghazi.

Just north of Benghazi, Jebel Akhdar, or Green Mountain, rises to the east, and has long been headquarters for a group of Islamist extremists. They, too, are now part of the broad anti-Gadhafi coalition.

Always a tough challenge in the Arab world.

Arnaud de Borchgrave, a member of the Atlantic Council, is editor-at-large at UPI and the Washington Times.  This column was syndicated by UPI. Photo credit: Getty Images.