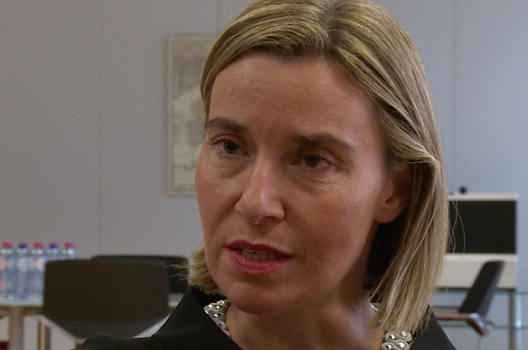 Welcome to the inaugural episode of “Channeling Brussels”, a new podcast on transatlantic foreign and security policy that bypasses the blah blah blah and digs  deep.

As your host, I’ve been covering the European Union and NATO for a decade for major U.S. and European news organizations and get asked constantly what happens to all the material ingather with major newsmakers and fascinating figures that doesn’t make it into the news cycle. Before, it just faded away. Now, with help from the Atlantic Council, “Channeling Brussels” is your pass to the front-row seat in the European capital.

Now you know what to do with all that time freed up from watching partisan haranguing in the US.

I’m absolutely delighted that one of Europe’s top-ranked women joined me for this “inaugural” show: Federica Mogherini, the European Union’s foreign policy chief, also a vice president of the European Commission (EC). She agreed to speak to me just a few hours after Donald Trump was confirmed as the next US president, a development which shocked Brussels along with all those American pollsters. This city stayed up all night watching and waiting too,  wondering what the heck had just happened and what on earth is going to happen next.

Vice President Mogherini ushered me into in her office in the Berlaymont building, the European Commission’s headquarters, where what first draws your eye is a huge framed poster of President Barack Obama on the wall, with the word “HOPE” on it.

She says the phrase that has stuck with her from Obama’s first White House campaign was that “everything is possible in America”.   It meant one thing during the election of America’s first black president in 2008.  Now, Mogherini notes pointedly, two very different interpretations are possible.

And now join me on the podcast for the rest of the story.