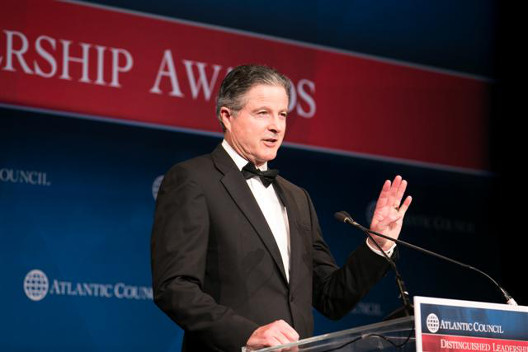 Speaking at the Atlantic Council awards dinner, where he was honored for distinguished business leadership, Watson noted that, “Over the last 150 years, we’ve seen the greatest advances in living standards in recorded history.” He proudly gave his own industry some credit for that fact, noting that the spread of affordable energy brought “light, heat, and mobility to billions of people around the world,” and drove the Industrial Revolution.

Watson also argued that, while multi-national corporations  “don’t represent the American government” while abroad, they “do represent American values wherever we operate.” In particular, they can demonstrate the ” advantage of competition, transparency, and fair dealings in the marketplace” and help spread the norms of binding contracts and the rule of law.

This is more important than ever, Watson believes, because “American influence and values are being challenged.” This theme was echoed by the night’s two honorees for distinguished international leadership, NATO Secretary General Anders Fogh Rasmussen and former secretary of state Hillary Clinton.

Watson asserted that, “Businesses like Chevron, working with government and other key stakeholders, play an indispensable role in helping to address the most pressing economic and social challenges at home and abroad” and advocated “partnership with the State Department to promote American values abroad.” He argued that, while their intermediate goals might differ, government, non-governmental organizations, and business share “the same aspirations for a world that is stable and prosperous.”

There is, of course, a tension in goals as well. Watson obliquely alluded to this when he called for government to “ensure domestic policies that enable investment and economic expansion.” In particular, he called for “fair and equitable taxation and clear support for international laws, contracts, and trade agreements.” What exactly constitutes “fair and equitable taxation” and how international law should govern the conduct of multi-national corporations is a subject of vigorous debate. But, while coming to an agreement on those questions is incredibly difficult, it’s hard to make a rational argument against doing so. Ideally, as Watson, Clinton, and Rasmussen all urged, we would find common cause between the transatlantic partners—including, if possible, the more advanced economies of Latin America—and then use that as the basis for global trade rules.