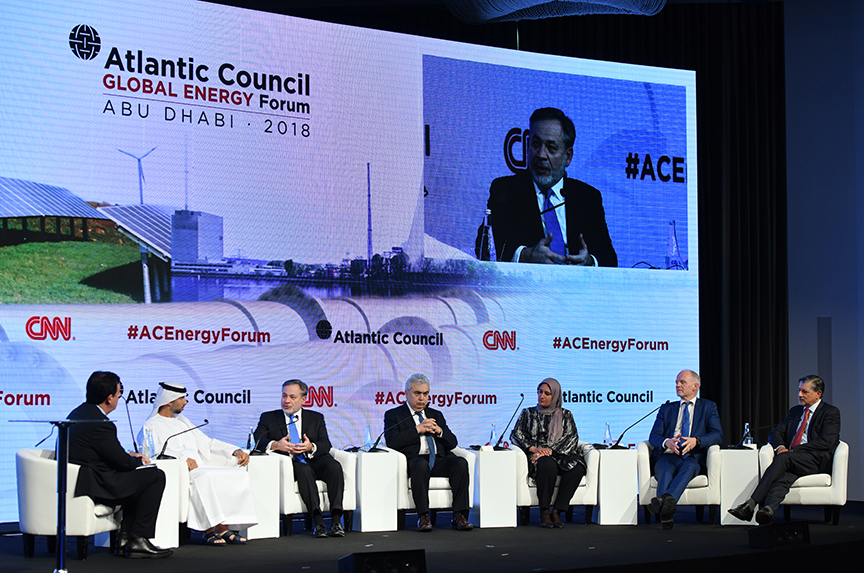 Beijing’s strategy seen likely to have a global impact

China’s heavy investment in electric cars will have a significant global impact, panelists said at the Atlantic Council’s Global Energy Forum in Abu Dhabi on January 12.

China has “put all of their R&D bet on mobility in electric vehicles, not one dime in internal combustion engines,” said Adnan Z. Amin, director-general of the International Renewable Energy Agency.

“Their bet is that electrical mobility is going to be the future and they are developing an industrial edge that is going to give them an advantage,” he added.

“The biggest car market in the world—China—is now putting all its eggs in electrification,” Baake said. “I think that is going to have a huge impact.”

Last year, China issued rules that would require automakers to sell more alternative-energy cars in China. Beijing has also set a target of one out of every five cars sold in China to run on alternative fuel by 2025.

Amin and Baake participated in a panel discussion on the opening day of the Global Energy Forum. They were joined on the panel by Fatih Birol, executive director of the International Energy Agency; Dan Brouillette, deputy secretary in the US Department of Energy; Wafaa Yousef Al Zaabi, managing director of Kuwait Petroleum Corporation; and Suhail Mohamed Faraj Al Mazrouei, the United Arab Emirates’ minister of energy and industry. John Defterios, Emerging Markets editor at CNNMoney, moderated the discussion.

Energy and the environment

Nations around the world are increasingly turning toward renewable sources of energy for reasons of economy and the environment.

“The way we generate that electricity… that’s where innovation is going to make a difference,” he added.

Baake outlined the transition to renewables—mainly solar and wind—that is taking place in the power sector in Germany. “The good story is the costs have come down so dramatically,” he said. “This is cheaper than any conventional production of electricity.”

Al Mazrouei cautioned that the shift toward electric mobility comes with challenges. “If you upscale a technology you need to think of all of the problems associated with it,” he said. For example, he added, “what are you going to do with the batteries and from where will you bring the materials to make the batteries and is it economical?”

The three pillars that are most important for policymakers are: security of supply, affordability, and the environment, said Al Mazrouei.

In Europe, policy makers are focused on meeting commitments made under the Paris climate agreement to cut greenhouse gas emissions, said Baake. US President Donald J. Trump pulled the United States out of that deal in 2017. Other signatories, including European nations, India, and China, have affirmed their commitment to the pact.

“We are talking about a complete big step to modernizing our transport sector, our industrial sector, our housing sector and, of course, also the power sector,” he said. “If you envision a world where we do not drive with diesel or gasoline anymore, where we do not heat our houses with gas or oil or coal, it is going to be a very different world, a much more modern world, and that is what we are working on,” he added.

Germany seeks to reduce its greenhouse gas emissions by 80-95 percent by 2050. This is compatible with the European target.

The UAE uses almost 100 percent natural gas for power generation. Its decision to shift to a mix of natural gas, solar energy, and nuclear is a “good balanced equation,” Al Mazrouei said, adding that the ratio will be revised every five years.

“The UAE is going to give a balanced policy when it comes to clean and fossil-based [energy] and we will adapt with the technologies as they evolve,” he added.

The United States’ expected rise to become the world’s largest exporter of liquefied natural gas (LNG) will have major implications for the geopolitics of gas and foreign policy, said Birol.

“The US being an undisputed leader of global oil and gas production is, for me, one of the major transformations of energy in the years to come,” he said.

The natural gas industry in the United States has undergone a revolution marked by a shale gas boom. This boom is driven by a number of factors, including the market and new technologies, said Brouillette. “We want to share those technologies,” he added.

Brouillette said that the Trump administration will continue to pursue all forms of energy. When natural gas supplies drop, prices go up, and it is at that point that coal is “very economical,” he said.

Amin said that even without subsidies, renewables would outperform any other source of energy when it comes to power generation. But, he added, “there is no one size fits all… there has to be a variation in the different sources.”

In Kuwait, for example, Al Zaabi said the demand for oil will continue even as the demand for renewables grows. As a result, over the next five years, the Kuwait Petroleum Corporation will invest $112 billion in oil and gas to develop Kuwait’s production capacity, she said.

Prior to the panel discussion, Meghan O’Sullivan, director of the Geopolitics of Energy Project at Harvard University’s John F. Kennedy School of Government, set the scene on the geopolitics of the energy transformation.

Past energy transitions have shown that it can take generations to complete, said O’Sullivan. “Coal took more than sixty years to go from constituting five percent of the world’s global energy mix to constituting more than fifty percent,” she said.

Furthermore, she added, the individual experiences of countries differ dramatically in a global energy transformation.

The unconventional energy boom in the past decade has, in the United States, boosted American hard and soft power, but it has done so through markets more than policy. “This distinction is very important because it has meant that American influence has continued to expand even while Washington may be adopting policies that seem to be more policies of retrenchment,” said O’Sullivan, who also serves as the Jeane Kirkpatrick Professor of the Practice of International Affairs at Harvard.

For Russia, the boom in unconventional oil and gas has made it more difficult to use natural gas as a political tool and has frustrated Russian efforts to enter Asian markets, she said.

And for China, it has loosened constraints on Chinese foreign policy and lubricated China’s rise in the international system.

While there are many uncertainties about the energy transformation, one thing is clear and that is it will be deeply interwoven with geopolitics. O’Sullivan laid out three scenarios—a liberal world order, seen since the last seventy years, in which a market-based energy transition will result in greater energy efficiency, greater deployment of renewables, but also a significant role for oil, gas, and maybe even coal; a world with unprecedented cooperation in which a top-down energy transition will be driven by governments and marked by the greatest role for renewables, but also a significant place for hydro and nuclear power; and, a global order that moves in the direction of multipolarity, in which case there will be a “thwarted transition” where the energy mix continues to be dominated by fossil fuels.

“The type of world order that exists—that is either sustained or evolves—really matters in how this transformation in energy takes place,” she added. And, she added, “what energy transformation is realized will fundamentally affect geopolitics.”