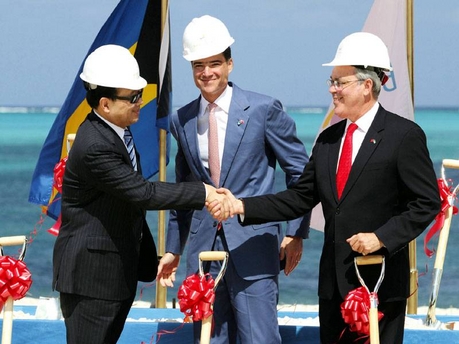 While World Bank President Robert Zoellick warns that the world is "one shock away from a full-blown crisis," China has broken ground and taken over the economic future of a country whose nearest island to the U.S. mainland is Bimini, only 50 miles away.

The Nassau Guardian editorialized: "The Bahamas has fallen fully into the embrace of China. And the rising empire has been kind with its gifts … What Bahamians must understand is that when China lends, and it contracts its own workers to do the job, a significant amount of the money borrowed goes back to China with the workers who build the project. They pay their workers with money we borrow … The Chinese also keep their workers in self-contained on-site camps when they are sent abroad. We barely get them to visit our stores to spend the money we borrowed when they are working in our countries."

When China invests in developing countries, Chinese labor is part of a "no-ticky-no-laundry" deal. A Chinese construction company recently broke ground for Baha Mar, a $3 billion gambling project on Cable Beach, 15 minutes from Nassau’s international airport and 30 minutes from downtown Nassau. China originally said it would require 8,150 of its own workers on site. The Bahamian government complained the influx was discombobulating the local labor market and they compromised on 6,150-strong Chinese labor force.

Some 4,000 Bahamians will also work for the four-hotel, 3,000-room Baha Mar complex, including condos and a Jack Nicklaus signature golf course.

Baha Mar, scheduled to open in December 2014, will be the Caribbean’s largest casino, one area where China trumped Las Vegas a decade ago. Macau, the former Portuguese peninsula colony, overtook "Lost Wages" a decade ago and is now the world’s biggest gambling mart.

The number of Chinese workers abroad in projects underwritten by China was estimated at 3.5 million in 2005. It is now 5.8 million. In Africa, there are about 1 million Chinese laborers, businessmen and miscellaneous "temporary residents." In Angola alone, the number is 100,000. Nigeria has 50,000. All for temporary jobs local labor isn’t qualified to handle.

In Algeria, some 40,000 Chinese built the country’s first national shopping mall, its largest prison, two luxury hotels and a 745-mile highway from Morocco to Tunisia. Some $20 billion in Algerian government contracts are in the pipeline out of which flows payment in oil.

China’s on-site workers get free room and board and each sends home an average of $1,000 a month, for an estimated total of $70 billion in 2009 alone.

Spread over 100,000 square miles of ocean, only 30 of the 700 Bahamian islands are inhabited but they stretch from 50 miles east of Florida to within 50 miles of Cuba, Haiti and the Dominican Republic.

China is getting far more worldwide influence from its sovereign investment fund than the United States got from a $1 trillion war in Iraq and a half-trillion-dollar war in Afghanistan — with several more years to go. With the interest on the money the United States owes China — $1.3 trillion in trade debt — the Chinese are winning friends and influencing people at breakneck speed.

The U.S. property fiasco is in stark contrast to China’s building boom from Macau to Mozambique and from Algeria to Angola. While the United States wrestles with extending the national debt limit past the $15 trillion level as well as reducing the deficit by $4 trillion, there is also the conundrum of how best to manage the $1.3 trillion we owe China’s 1.3 billion people.

China’s problem is coping with a rate of growth of 10.3 percent that is easing back to plus 9.7 percent this year. And the China Investment Corp.’s $300 billion investment fund has trouble keeping up with worldwide demand for infrastructure projects.

China clearly sees a permanent foothold in the Caribbean in its geopolitical future. The U.S. Embassy in Barbados is responsible for half a dozen island nations — Anguilla, Antigua and Barbuda, British Virgin Islands, Dominica, Grenada, Guadeloupe/Martinique, St. Barts, St. Kitts — where the United States has no diplomatic representation. China has an ambassador or a consul in seven of them; the United States not one.

In the Bahamas, Hong Kong’s Hutchison-Whampoa owns the Freeport Container Port; the Freeport Harbour Co.; the Grand Bahama Airport, which boasts the largest private aviation facility in the world; and the Our Lucaya Resort.

In Nassau, the Chinese are building a $10 million chancery to handle the influx of Chinese labor. China is also spending $70 million on improving Nassau’s international airport.

China estimates the Baha Mar complex over the next 20 years will result in $5 billion in incremental tax revenue and a cumulative $11.2 billion to Bahamas domestic product. By then, too, China should be irreversibly entrenched in the strategic archipelago.

Among the recent outreach of the world’s most populous nation: a new broadcasting center now going up on Times Square in New York, part of a $7 billion investment in "global propaganda," reports The Wall Street Journal’s Gordon Crovitz. VOA and BBC, meanwhile, are slashing Chinese language programs and dozens of other foreign language newscasts.

The dumbest move of all in the Obama administration is to put the VOA’s Arabic programs on the chopping block as the Arab world belches revolution from Algeria to Libya to Egypt to Syria to Bahrain.

"We are in an information war and we are losing it," U.S. Secretary of State Hillary Clinton testified recently. Then please do something about it. The cost of a couple of F-16s could do the trick.

Arnaud de Borchgrave, a member of the Atlantic Council, is editor-at-large at UPI and the Washington Times. This column was syndicated by UPI. Photo credit: AP.