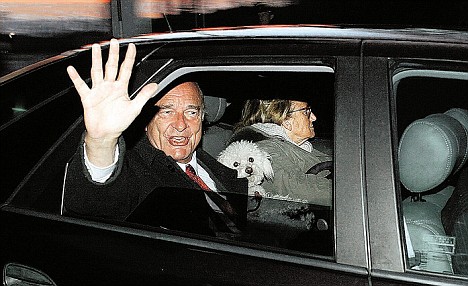 Former French president Jacques Chirac was rushed to hospital after being mauled by his own ‘clinically depressed’ pet dog.  The 76-year-old statesman was savaged by his white Maltese dog – which suffers from frenzied fits and is being treated with anti-depressants.  The animal, named Sumo, had become increasingly violent over the past years and was prone to making ‘vicious, unprovoked attacks’, Chirac’s wife Bernadette said.

The former president, who ruled France for 12 years until 2007, was taken to hospital in Paris where he was treated as an outpatient and sent home, VSD magazine reported.

Mrs Chirac said: ‘The dog went for him for no apparent reason. ‘We were already aware the animal was unpredictable and is actually being treated with pills for depression. ‘My husband was bitten quite badly, but he is certain to make a full recovery over the coming weeks.’

The former French First Lady did not reveal where on his body Chirac was bitten.

I shall resist the urge to find humor in this situation (unlike, say, Pete Abel who headlines his post on the matter “Real Stories that Reinforce Stereotypes” or the various commenters over at Fausta Wertz‘ blog) and simply wish the gentleman a speedy recovery.

Postscript:  My colleague Dave Schuler wishes to point out that, despite the Mail’s headline, a Maltese is not a poodle.  Duly noted.