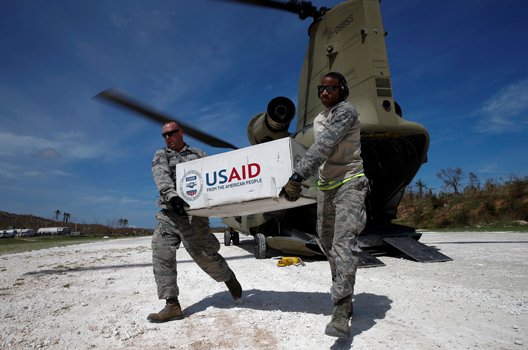 While the twenty-third Conference of the Parties (COP23) was beginning in Bonn, the US House and Senate Armed Services Committees were wrapping up negotiations on the fiscal year 2018 National Defense Authorization Act. The bipartisan conference report that emerged from those negotiations calls climate change “a direct threat to the national security of the United States [that] is impacting stability in areas of the world both where the United States Armed Forces are operating today, and where strategic implications for future conflict exist.”

For the past two weeks, much of the global conversation on climate change has focused on the talks in Bonn and how parties to the Paris Accord—from which the United States regrettably announced its intention to withdrawal—plan to meet their carbon reduction goals. However, the Armed Services Committees’ conference report emphasizes the national security risks associated with changing global temperatures.

That assessment should come as no surprise.  Countless reports have highlighted the potential negative impacts of climate change on global stability.  To cite just one, the 2014 Quadrennial Defense Review called the effects of climate change “threat multipliers that will aggravate stressors abroad such as poverty, environmental degradation, political instability, and social tensions – conditions that can enable terrorist activity and other forms of violence.”

The emergence of such conditions would place significant demands on the US military.  Take humanitarian assistance, for example.  One risk of climate change is its impact on the frequency and intensity of storms.  As the 2017 Climate Science Special Report (CSSR) found:

This year’s recent hurricane season brought reminders of the degree to which the national response to weather-induced crises relies on the military. Following Hurricanes Harvey, Irma, and Maria, the US Department of Defense (DOD) conducted search and rescue operations, transported food and water to affected areas, cleared roads, and repaired airports and sea ports. The hospital ship USNS Comfort provided critical medical care in Puerto Rico.  By the end of October, US Transportation Command had flown more than 2,800 flights in support of hurricane relief operations, and the Defense Logistics Agency had supplied more than 87 million meals and 10 million liters of water in Puerto Rico alone.

However, humanitarian assistance and disaster relief is not the only climate-related challenge likely to confront the military. There is also the threat that climate change will create conditions that expand the scope of military operations. The Center for Naval Analyses Military Advisory Board’s report, National Security and the Accelerating Risks of Climate Change, discusses how changes in the Arctic could impact stability, warning that:

“As a warming planet affords increased access to the Arctic, the [Military Advisory Board] cannot rule out new disputes arising over natural resource exploration and recovery, fishing, and over future shipping lanes.”

If new demands on the force were not enough, climate change also threatens the infrastructure on which the military’s ability to respond is built. The DOD pointed this out in a 2016 study, which found that: “Built and natural infrastructure is at risk from a variety of potential climate change impacts. For built infrastructure, this could include potential impacts to energy, fuel, transportation, water supply, and utility services on installations.”

Just look at Naval Station Norfolk, the largest concentration of US naval forces in the world. The DOD itself has called sea level rise “a significant and pervasive threat multiplier to mission sustainability” at Norfolk.  In the words of former Naval Oceanographer Rear Admiral David Titley: “These guys are in a whole heap ton of trouble.”

The defense bill identifies other climate-related impacts to defense infrastructure, including a $1 billion radar installation built on an atoll in the Marshall Islands, “projected to be underwater within two decades,” and a combination of sea level rise and loss of ice and permafrost that is eroding shorelines in the Arctic “damaging radar and communication installations, runways, seawalls, and training areas.”

Even for those who doubt the scientific consensus on climate change, inaction in the face of what must be recognized as substantial risks would run counter to sound military planning—and common sense.  As former Army Chief of Staff General Gordon Sullivan put it in a Center for Naval Analyses report: “If you wait until you have 100 percent certainty, something bad is going to happen on the battlefield.”

With that in mind, the defense bill is a step in the right direction. The bill requires DOD to prepare for the “the effects of a changing climate on threat assessments, resources, and readiness.” It requires DOD to produce a report identifying military installations most vulnerable to effects of climate change and describe potential mitigating measures.  In addition, the bill calls for the Department to assess how climate change will impact humanitarian assistance and disaster relief, theater campaign plans, contingency plans, and global posture.

While a report will not change the threat, maybe it will change some minds.