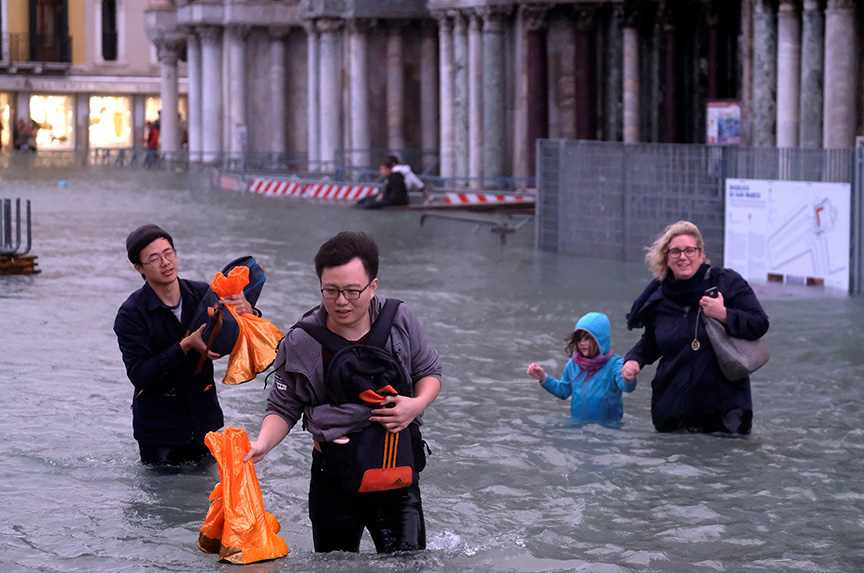 The past few weeks have produced a steady stream of bad news for the Earth.

Here’s a look at some stories making headlines.

Water, water everywhere. The sight of water in Venice, a city famed for its romantic canals and gondolas, is not unusual; what is unusual is when pedestrians wade through waist-deep water in the streets and tourists go for a swim in St. Mark’s Square. Gusting winds drove the high tide to more than 61 inches—one of the highest levels recorded for the Italian city.

Iceberg ahead. At the bottom of world, an iceberg five times the size of Manhattan (so, a very, very large iceberg) calved off the Pine Island Glacier in West Antarctica. A study published by Nature Climate Change found that “ice losses from Antarctica have accelerated during the past 25 years.” What’s more, forty percent of the continent’s sea level rise has occurred during the past five years.

“If the iceberg migrates northward to warmer waters, it will likely melt, contributing in its own small way to sea-level rise,” explains David Livingston, deputy director for climate and advanced energy in the Atlantic Council’s Global Energy Center.

“The exact mechanisms driving ice shelf lost are complex, and it is hard to pin the exact contribution of climate change to individual events such as this, but it can serve as another key example of how climate change is not just a thermometer that is getting turned up and can eventually be turned down; instead, climate change can contribute to fundamental and irreversible changes in key Earth states and systems,” he added.

Glas-gone? A major study found that critical infrastructure—roads, bridges, rail lines, and hospitals—in the Glasgow area of the United Kingdom are at significant risk of being impacted by climate change, the Guardian reported.

“Climate change should be a non-negotiable, critical aspect of infrastructure planning, as the heart of the US energy complex, in the Gulf Coast, knows all too well from the hurricane seasons of the past couple of years,” said Livingston. “Far too few government agencies and processes are taking this seriously into account, however. Climate-smart infrastructure is not a ‘nice-to-have’; it is increasingly a matter of life and death.”

Driven to extinction. The WWF’s Living Planet Report has more grim news. It concludes that the average vertebrate population—birds, fish, mammals, amphibians, and reptiles—on Earth has declined 60 percent since 1970. Climate change is a significant—but not the only—factor in this decline.

Something to w(h)ine about.  If all this was not enough to get your attention, consider this: the Washington Post reported on the harmful impact climate change is having on Italy’s wine industry. “In a region celebrated for the prosecco and pinot grigio it ships around the world, Italy’s particularly sensitive white wine grapes have become a telltale of even gradual temperature increases—a climate slipping from ideal to nearly ideal. Vintners and farmers are noticing more disease, an accelerated ripening process and, most viscerally, a surge in the number of grapes that are singed by the intensifying summer heat,” the Post reports.

While some regions will suffer worse wine grape harvests, climate change may also open up new producing regions in northern latitudes, said Livingston. “But, imagine a world in which the impacts of climate change on lucrative export products such as wine are widespread and severe, to the point where countries might seek remuneration from those that have contributed to such damage,” he said.

“This wouldn’t just be sour grapes from a few producers whose vineyards are no longer producing; it could instead be a new driver of geoeconomic instability and trade tensions,” he added.

And something to get hopping mad about. Barley is a key ingredient in the manufacture of beer; it is also extremely sensitive to drought and extreme heat. If barley supplies were to dwindle—as a result of climate change—that would have an impact on, you guessed it, beer. A study published in Nature Plants found that changes in barley supply would cause beer prices to double and global beer consumption would fall by 16 percent.