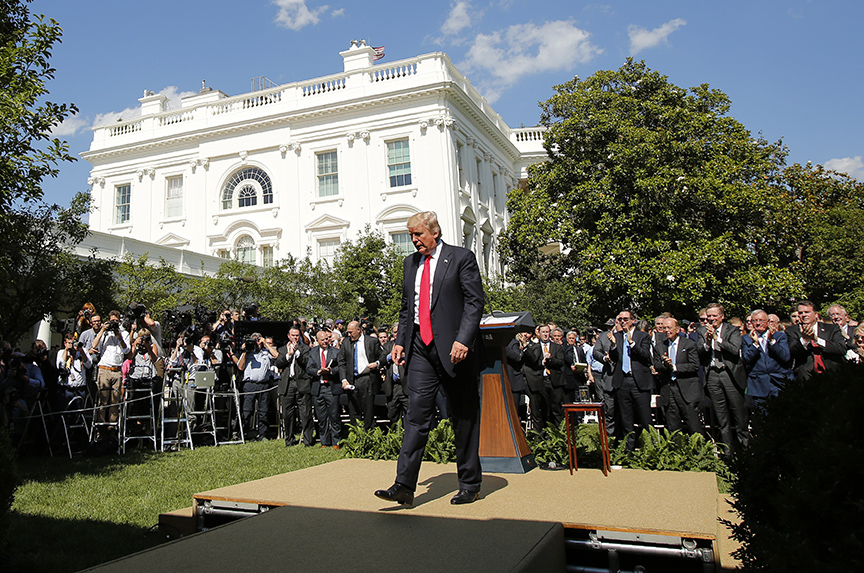 US President Donald J. Trump departed after announcing his decision that the United States will withdraw from the landmark Paris climate agreement in the White House Rose Garden in Washington on June 1. (Reuters/Kevin Lamarque)

Rising sea levels, extreme weather patterns, and other examples of our warming climate pose life-altering threats to communities around the world. Ninety-seven percent of scientists have concluded that the climate is indeed warming—and that humans are playing a role.

John Macomber, a former president of the Export-Import Bank, puts it more bluntly, calling climate change “so evident that only a few diehards dispute that something major is staring us in the face.” The question is not whether the climate is changing, but how to address it.

To curb the effects of climate change, reducing carbon dioxide (CO2) emissions is key. As the world’s second-largest emitter (just behind China), the United States must significantly reduce its emissions if it is to contribute to and even lead the way in the global fight against climate change. The Obama administration sought to tackle this challenge on the international and domestic fronts with the Paris Agreement and the Clean Power Plan (CPP). However, US President Donald J. Trump has announced that the United States will withdraw from the Paris Agreement, while the CPP faces significant challenges from the courts and the Trump administration.

Despite the political challenges, Americans seem to agree that climate change needs to be addressed. A recent Gallup poll found that 45 percent of Americans “worry a great deal about global warming,” while an even more surprising 59 percent of Americans believe the environment should be prioritized over energy production.

As Macomber put it in a speech at the Metropolitan Club in Washington, DC, on April 10, “this challenge is crying out for leadership.” However, at a time of deep domestic partisanship and a United States that is absent from international climate action, who will lead, and how?

When it comes to whom, there are signs of emerging leadership, in Congress and even amongst Republicans. In Congress, the Climate Solutions Caucus in the House of Representatives boasts thirty-four members, evenly split between Republicans and Democrats. There are also a growing number of lawmakers speaking up on climate change. Sen. John McCain (R-AZ) recently stated that climate change is real and called failure to prevent the environmental damage it could bring a catastrophe. Even for those who remain unsure of how much human activity contributes to climate change, the potential for climate-related risk is undeniable. Former Treasury Secretary James A. Baker III recently said: “I was and remain somewhat of a skeptic about the extent to which man is responsible for climate change. But I do think the risks associated with it are too great to ignore.”

When it comes to how, there is a growing voice coming from the right side of the political spectrum on a conservative answer to climate change. For his part, Macomber, a lifetime director of the Atlantic Council’s board, proposes a carbon tax, or fee, with the reasoning that if electricity, gasoline, and other carbon-based fuels are more expensive, demand for them will decline and shift toward alternative sources of energy. He isn’t alone in suggesting this solution. His proposal comes on the heels of calls for a carbon tax from prominent conservative statesmen and former Treasury secretaries Baker and George P. Shultz who promoted the idea as a conservative answer to climate change in an opinion piece in the Wall Street Journal.

It would, of course, be unlikely for a Republican White House and Congress to enact a new tax without something to promise its constituents in return. To address this, Shultz and Baker’s plan suggests that revenues from the carbon fee be sent to citizens in the form of “dividends.” Under a $40/ton carbon tax, they claim, a family of four would receive roughly $2,000 in dividends in the first year. As the carbon tax rate increases, this amount would increase as well. Macomber argues that “the proposals most likely to succeed are revenue-neutral” and the best chance for adoption is as part of a broader tax reform package.

Several oil majors have also voiced support for a carbon tax. BP, ExxonMobil, and Total are just a few of the majors to announce their founding membership of the Climate Leadership Council, a group that advocates Shultz and Baker’s carbon tax plan as “a consensus climate solution that bridges partisan divides, strengthens our economy and protects our shared environment.” These companies are joined in their founding membership by the Nature Conservancy and Conservation International.

A carbon tax could appeal to Republicans (and oil majors) as this would enable the elimination of Obama-era climate regulations that already face extreme opposition from the Trump administration and Congress, while still incentivizing the transition to lower-carbon energy sources. The idea is likely to appeal to American families because revenue will return to them, whether in the form of dividends or otherwise.

In addition to offering something for both sides of the aisle, incentivizing the transition to clean energy is in line with what the market is telling us. BP’s recently released 2017 Statistical Review of World Energy says that  “growth in global primary consumption remained low in 2016; and the fuel mix shifted away from coal towards lower carbon fuels.” Research continues to show that renewable energy is a rapidly growing job sector—for example, it’s estimated that solar and wind jobs are growing twelve times as fast as the rest of the US economy.

If the United States resists the inevitable energy transition, it will cede leadership on climate action and development of new technologies to China and Europe. The United States must press forward on emissions reduction, and a carbon tax presents a bipartisan, sensible approach to doing so. “Whatever we do,” said Macomber, “we cannot let nostalgia drive our energy policy.”

Gray Johnson is a program assistant at the Atlantic Council’s Global Energy Center. You can follow her on Twitter @GrayJohnson.