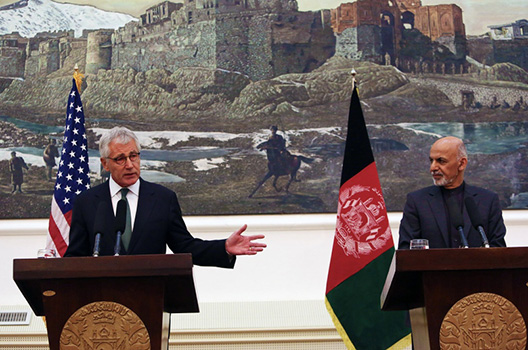 As US and NATO troops depart Afghanistan, they are taking with them their expertise, hardware, dollars, and jobs – and also leaving behind many questions about the fate of that country’s security and economy.

Outgoing US Defense Secretary Chuck Hagel announced last week that the pace of the drawdown of US troops has been slowed, but only temporarily.

On a visit to Kabul on December 6, Hagel said the US will keep up to 10,800 troops in Afghanistan for the first few months of 2015. That number is 1,000 more than originally planned.

The decision to keep additional troops in Afghanistan does “not change our troops’ missions or the long-term timeline for our withdrawal,” said Hagel at a separate press briefing. This means that US troop levels will eventually drop to 5,500 by the end of 2015 and nearly to zero by the end of 2016.

For the better part of this year, US and NATO troops have been in supporting roles while Afghan security forces were increasingly taking the lead in operations against the Taliban insurgency. The ANSF is, however, hamstrung by logistical constraints: it has no air force, and it has suffered extremely high casualty and desertion rates.

“It is very telling that the departing commander of the ISAF forces, US Lt Gen Joseph Anderson, recently admitted in an interview with the New York Times that he couldn’t say whether to be optimistic or pessimistic about how things would pan out,” said Rakisits.

The US decided to keep the additional troops in Afghanistan because its NATO allies have been slow to provide troops to train and advise Afghan security forces under the new mission — Operation Resolute Support.

“There is no political appetite in Europe to stay [in Afghanistan]. The West is leaving. That’s the bottom line,” said Rakisits.

Hagel said the delay in signing security agreements between the Afghan government and the US and NATO had set back coalition efforts to pull together enough troops to train, advise, and support Afghan security forces.

“President Obama has just bought some time for the process to catch up. But the mission does not change. Our combat role is over,” said Hagel, a former chairman of the Atlantic Council.

US and NATO troops ceremonially marked the end of their combat mission on December 8, but US President Barack Obama has authorized US forces to carry out operations against Taliban and al Qaeda targets inside Afghanistan.

That some US and NATO forces will remain in Afghanistan beyond the end of 2014 was made possible by Afghan President Ashraf Ghani when he signed security pacts with the US and NATO soon after coming to office in September.

Ghani’s predecessor, Hamid Karzai, had refused to sign the agreements, citing anger over civilian deaths and accusing the US of not being interested in helping his government negotiate peace with the Taliban.

Even as the US and NATO have declared an end to their combat mission in Afghanistan, their adversary — the Taliban — has made a steady comeback.

“The Taliban is far from being a spent force. They have stepped up their attacks, including in Kabul, even at this time of the year when fighting generally diminishes,” said Rakisits.

“Are they about to take over Kabul? I don’t think so. But the question is really whether the ANSF will have the will to continue to fight if the tide begins to change in favor of the Taliban. One should not forget that the 140,000 Western troops were unable to defeat the Taliban, so how will the ANSF fair against the Taliban in the long-run?” he said.

“The Taliban knows that the West is ‘tired’ of Afghanistan. It has cost a lot of money ($1 trillion) and lives for little return. Politically, it is difficult for politicians to make a case for continued high involvement in Afghanistan,” he added.

Besides leaving Afghanistan more vulnerable to the Taliban, the withdrawal of tens of thousands of coalition troops also deprives the Afghan economy of critical dollars and coalition jobs.

“The Afghan budget relies about 80 percent on foreign aid … and on the [coalition forces]. Once that dries up there will be a big financial gap,” said Rakisits.

Bridging that gap will be a key challenge for Ghani, who previously worked at the World Bank and served on the Atlantic Council’s International Advisory board. “In the short term, it is a big worry,” said Rakisits.

Besides grappling with security and economic challenges, Ghani will have to make good on his promise to tackle corruption — a top concern of Western donors. More immediately, he must finalize a Cabinet.

“The challenges on the ground confirm how critical it is for the President Ghani to finalize his Cabinet, including the ministers responsible for the security of the country. Until that’s done, the government will not be able to make long-term decisions,” said Rakisits.