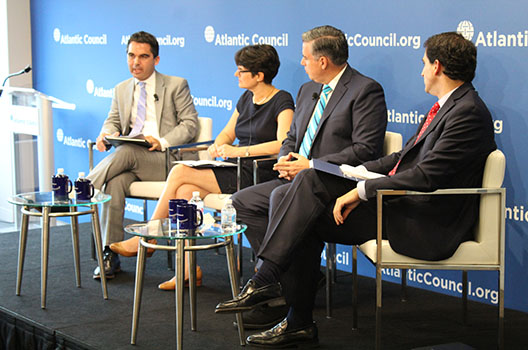 Alina Dieste, Tomás González, and Juan Carlos López all hailed the election of Iván Duque as the next President of Colombia as a historic success for Colombian democracy. Duque, of the right-leaning Democratic Center party, beat left-leaning candidate Gustavo Petro, fifty-four percent to forty-two percent. The June 17th election was the second round of the contest, after no candidate reached the fifty percent threshold during the first round on May 25th.

At a June 19th event hosted by the Atlantic Council’s Adrienne Arsht Latin America Center, Dieste, González, and López explained the importance of Duque’s election and detailed the challenges his new administration will face.

For López, the US Political Director and Anchor for CNN en Español, the biggest success of the vote was the lack of violence. “It was so ingrained in Colombia that elections mean violence. . . that seeing this election on Sunday happen in total calm without any type of interruption was a big headline,” he said. López also pointed out that the speed of the vote tally – it was counted in less than an hour – was another important “sign of maturity” on what was a “very positive day for the Colombian democracy.”

Jason Marczak, Director of the Adrienne Arsht Latin America Center and moderator of the panel, also noted the lack of coordinated disinformation campaigns that have marred other global elections in recent years. Marczak highlighted the joint project between the Latin America Center and the Atlantic Council’s Digital Forensic Research Lab (DFRLab) in determining that only small pockets of disinformation appeared in the run-up to the second-round election.

Alina Dieste, the Washington correspondent for Agence France-Presse (AFP) and the former managing editor of the AFP Colombia bureau, argued that the results on Sunday, which showed not only a victory for Duque, but also a record high vote total (8 million) for his left-leaning opponent Gustavo Petro, demonstrated that the Colombian people “were voting for change.” Duque won, in part, because he was a “young face. . . [that] no one knows in terms of corruption,” according to Dieste.

Despite winning by twelve percentage points, the panelists believed that Duque received a less than clear mandate from the Colombian electorate. Tomás González, the Executive Director for Colombia at the International Monetary Fund and a member of the Atlantic Council’s Colombia Task Force, pointed out that the results featured heavy geographic polarization, with the coasts and Bogotá voting for Petro and the rest of the country for Duque. López asserted that “Duque has a mandate, but not one that allows him to go any way he wants,” but also pointed out Duque’s acceptance speech as a sign that the new president may be more willing to govern from the center and broaden his appeal to Petro’s left-leaning voters.

González identified two potential indicators of Duque’s ability to govern from the center: his choice of cabinet members and the first budget. Should Duque be able to provide tangible concessions to the left through these actions, then his calls for unity could be considered more serious. González believes it will be difficult for Duque to balance his fiscal priorities – passing a tax cut and cutting government spending – with the quality of life programs included under the “inclusive growth” program demanded by Petro’s base.

Duque must also balance his campaign promise to alter the 2016 deal with the Revolutionary Armed Forces of Colombia (FARC), with the clear desire among many Colombians for the peace process to be protected. “[Duque] does not want to tear the accord apart, but he wants to be fair towards the victims” of FARC attacks, according to Dieste. She stressed that while Duque has committed to making changes, this could “be risky. . . [because] those people who voted for Petro wanted the peace to be maintained,” and was an important factor in the leftist’s record high vote total.

Venezuela will also prove to be an enormous challenge for Duque, as Colombia has become “an escape valve,” for its neighbor’s political crisis, according to López. While Colombia will continue to receive assistance in dealing with a spiraling migrant crisis, López believes that Duque will have “a limited toolbox” to address the crisis.

Economically, Duque “will inherit a lot of positive instruments” to continue to grow the Colombian economy, according to González. Colombia’s acceptance in the Organization for Economic Cooperation and Development (OECD), a successful adjustment after the latest oil shock, and historically low levels of unemployment and inflation, will give him considerable room to maneuver, González argued. When asked what Duque’s priorities should be as he starts his administration, González listed infrastructure, the formalization of Colombian businesses and the labor market, and reforming the energy sector as the most important issues.

Despite the challenges ahead, there was agreement that the June 17th election was a major milestone for Colombian democracy. In the past, many voters would have been scared to vote for leftist candidates, out of fear for being labelled as a FARC sympathizer, but in this election “people voted for whoever they wanted,” cheered López. After decades of civil war and political division, López argued, “Colombia turned the page.”

David Wemer is an assistant director of editorial content at the Atlantic Council.