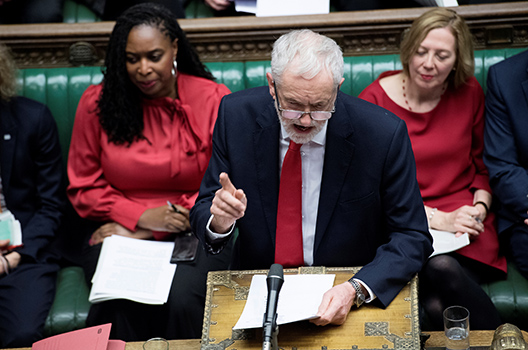 It is just possible that the British Parliament might eventually be able to agree a compromise on how Britain should leave the European Union. But which of the country’s warring politicians might be able to secure such a compromise remains almost impossible to fathom.

The problem is that the two most important figures in this debate, Prime Minister Theresa May and opposition leader Jeremy Corbyn, appear unwilling and unable to compromise.

In all probability it will take some time to break the current impasse, with the immediate alternatives being either that the UK will crash out of the EU on March 29 without any formal departure agreement, such as that defeated in Parliament on January 15 by 432 to 202 votes, or that this deadline will be lifted to allow further consideration.

At the same time, however, the search will continue both for a compromise agreement that might just manage to secure a parliamentary majority or for a cross-party coalition that could demand a second referendum with the option to remain within the EU as one option on the ballot.

If there is to be a compromise on a genuine cross-party basis, then it will most likely take the form of participation in a customs union with the EU. This concept appeals both to Remainers in the Conservative cabinet and to the leadership—and most MPs—in the opposition Labour, Liberal Democrat, and Scottish and Welsh nationalist parties. Between them these parties hold 306 seats in the 650-seat House of Commons and all but a handful would be expected to back such a move. So, in theory, if just fifteen to twenty-five of the 317 Conservative MPs were to back such a move, it could pass.

But while some cabinet ministers have privately indicated that they favor such a solution, May herself will almost certainly rule it out because it would split the party and be wholly unacceptable to the vast bulk of the 118 Conservative MPs who voted against her own agreement on January 15 and who almost certainly comprise the same hard core as the 117 Brexiteer rebels who voted against her in an internal party leadership challenge on December 11.

In a brief declaration after losing the January 15 vote by an unprecedented margin, May did say she would reach out to opposition politicians. But there has been no indication so far that she has actually contacted any significant opposition figures, although this is not so surprising given the fact that she was focused on combatting the Labour Party’s no-confidence motion in her government on January 16, which she won. Indeed, she initially subverted her own initiative when, after saying she wanted to have a meeting with parliamentary leaders, she declined to invite Corbyn, whose official title is Leader of Her Majesty’s Loyal Opposition.  After winning her confidence vote, she did open to door to talks with Corbyn, but received a frosty response as Corbyn said that for such talks to be positive, May would have to rule out the prospect of a ‘No Deal’ Brexit.

But then Corbyn is not well-positioned for compromise either. His own instinctive attitudes are anti-EU, yet he leads a party whose MPs and members strongly favor staying inside the EU and whose voters, according to recent polling, would now vote 80 percent in favor of Remain were there to be a second referendum pitting Remain against either May’s agreement or no deal altogether.

But although a second referendum—or People’s Vote as it is popularly called—is still an option in official Labour party policy, Corbyn consistently refuses to call for such a vote, stressing his demand for a general election. And while his chief lieutenant, Shadow Chancellor John McDonnell now routinely—and without prompting—raises the possibility of a People’s Vote, there is considerable skepticism in both parliamentary and People’s Vote circles that he really believes in it.

But Corbyn remains key to any outcome, except, perhaps, a catastrophic exit from the EU without any deal whatsoever. The confidence motion on January 16 ensures the spotlight is now almost as much on Corbyn as it is on May. And much of the story in the next few days, now that May has survived the confidence vote, will be on the astonishing fact that the greatest political defeat that a government has ever suffered in the House of Commons has not only failed to result in the resignation of the government or the prime minister, but in the failure of the leader of the opposition to put together a coalition to bring the government down.

And what it also makes clear to Labour’s own membership and supporters is that so much of Britain’s fate with regard to its future relations with the EU now rests in the hands of a leader who talks about the need to respect the opinion of party members but who—on the key issue of remaining in the EU—consistently demonstrates real antipathy to either a second referendum or to remaining in the EU.

With his own options narrowing, it would appear that Corbyn now has two main alternatives. He either has to back a People’s Vote and work to secure a cross-party parliamentary majority for such a vote, or he has to find a way to work with May to help get some version of a Brexit agreement through the House of Commons.

So far, the focus has been on the idea that somehow, with just seventy two days left to go before Britain is scheduled to leave the EU, Corbyn and May might find a positive way to cooperate for the good of the country.

But there is another way in which Corbyn might help the prime minister secure Brexit.

He could say the issue is of such importance that party loyalties should be set side, at least on the Labour side, and that a free vote would be allowed on some revised version of May’s previously defeated plan. He could announce that he would himself abstain and urge his own MPs to follow suit.

Under such an arrangement, scores, possibly hundreds, of Labour MPs who voted “No” to May’s agreement on January 15 would now switch to abstain while some of the party’s natural pro-Remain MPs would switch to voting for her agreement.

Since May did manage to secure a majority of votes amongst Conservative MPs on January 15, this might just be enough for the prime minister to win a fresh vote on her Brexit deal, albeit with minority support in the House as a whole.

And from Corbyn’s perspective, it would leave the Conservative government to pick up the pieces of the messiest political process in modern British history.