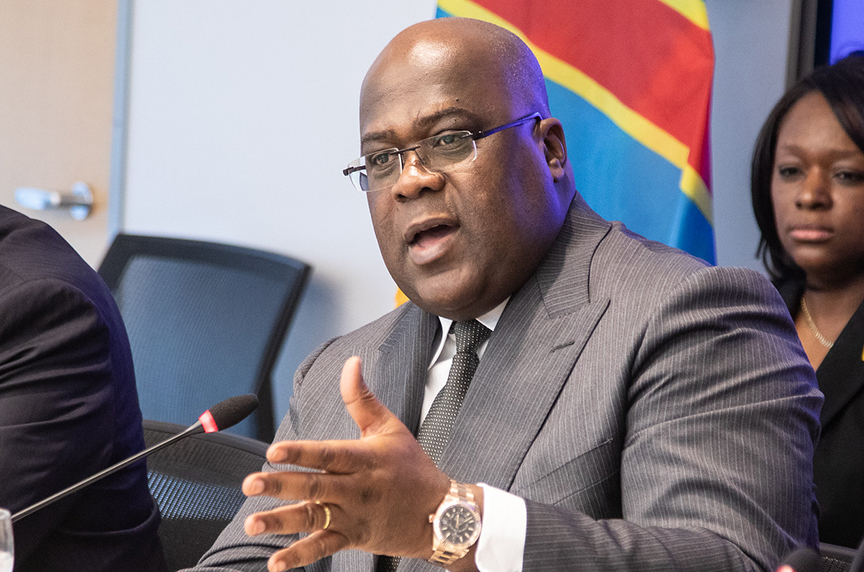 The Islamic State, pushed out of its strongholds in Syria and Iraq, could seek to establish a caliphate in the heart of Africa, Congolese President Félix Tshisekedi warned in a meeting at the Atlantic Council in Washington on April 4. He sought a “strategic partnership” with the United States, one of the pillars of which would be military assistance to address the challenge of terrorism.

“It is easy to see how the defeat of Daesh, the Islamic State, in Syria and Iraq could lead to a situation where these groups are now going to come into Africa and take advantage of the pervasive poverty and also the situation of chaos that we have, for example, in Beni and Butembo, to set up their caliphate,” Tshisekedi said, referring to cities in northeastern DRC which have been gripped by deadly violence.

He blamed the violence in northeastern Democratic Republic of Congo (DRC) on “local and foreign” armed groups.

Tshisekedi cited recent military intelligence that he said points to an “Islamic threat” stemming from the ADF, a Ugandan-led militant group based in the DRC.

In November 2018, the US Embassy in Kinshasa closed after receiving intelligence that an ISIS-linked group could carry out attacks against US interests in the DRC. The embassy reopened in December.

Tshisekedi committed the DRC to the global war on terrorism. He said that in his meetings in Washington he has sought military cooperation with the United States to help equip the Congolese army and improve its intelligence capabilities. Such support, he maintained, was also essential to facilitating regional cooperation to address the threat posed by terrorism.

In eastern DRC, deadly violence by militias and Congolese security forces has made it difficult for health workers to treat the worst outbreak of Ebola in the history of the country. Attacks on treatment centers have compelled some international groups to suspend operations.

Since the outbreak of Ebola was detected in August 2018 there have been 993 confirmed and probable cases and 621 deaths in North Kivu and Ituri provinces, according to the World Health Organization (WHO).

Tshisekedi said the prevalence of Ebola was “even more reason why we need the support of our partners, in particular the United States.”

J. Peter Pham, the US special envoy for the Great Lakes Region of Africa, said that in his meeting with Tshisekedi he had discussed the Congolese leader’s commitment to address the Ebola crisis, but also to fight corruption, advance human rights, ensure regional peace and security, and enhance the economic relationship between the United States and the DRC.

Tshisekedi has promised to fight corruption and open up the political space in the country. In March, he pardoned around 700 political prisoners jailed under his predecessor, Joseph Kabila.

Pham, who is also the vice president for research and regional initiatives and director of the Atlantic Council’s Africa Center, said it was “very gratifying” to see the decree Tshisekedi signed on the release of prisoners. Pham also asked Tshisekedi about the return of exiles, acknowledging that the Congolese government had returned opposition figure Moïse Katumbi’s passport.

Tshisekedi, who spoke in French through a translator, said he is also seeking US assistance to “re-establish” the Congolese government, which he said would help ensure rule of law, a strong judicial system, and improve the business climate in the DRC.

“What we’re seeking is a new type of cooperation based on a win-win situation —  a partnership that will be beneficial for both of our countries,” Tshisekedi said.

Tshisekedi’s father, Étienne, was the founder of the Union for Democracy and Social Progress, the oldest and largest opposition party of the DRC. Felix took over the party following his father’s death in 2017.

Tshisekedi was sworn in as the president of the DRC on January 24. His inauguration marked the first peaceful transition of power in the history of the DRC and the end of his predecessor Kabila’s term, which lasted eighteen years.

Tshisekedi and Kabila have since agreed to form a coalition government. Tshisekedi was unable to win enough seats in parliament, where Kabila’s Common Front for Congo (FCC), a coalition of several parties, holds an absolute majority.

The December 30, 2018, election, however, was mired in controversy. Martin Fayulu, the leader of the Engagement for Citizenship and Development party, was widely expected to win the election by a huge margin. An observer mission from the DRC’s highly respected Catholic Church’s bishops conference (CENCO) said its partial tallies showed Fayulu winning.

Following his surprise defeat, Fayulu launched a legal bid for a recount of the votes and proclaimed himself “the only legitimate president.” The Constitutional Court rejected his appeal because he presented no evidence to the tribunal to back his claims and declared Tshisekedi the winner.

After the decision by the Constitutional Court, the US State Department welcomed the first peaceful and democratic transfer of power in the DRC. While the elections represented the will of the Congolese people for a change of regime after eighteen years of rule by Kabila, concerns over the conduct and transparency of the electoral process remained.

On February 22, senior DRC officials, including CENI President Corneille Nangaa, were publicly designated by the State Department for engaging in corruption and undermining the democratic process, by conduct dating back to 2016. The officials, five of whom were identified while the names of others were withheld, were banned from receiving US visas. In a statement from Kinshasa, a senior State Department official indicated that the punitive measures were targeted against specific malign actors, and “supported President Tshisekedi’s commitment to root out corruption, advance human rights, and strengthen the DRC’s democracy.” These public designations were quickly followed by targeted financial sanctions against these individuals by the US Treasury Department on March 21.

Tshisekedi met US Secretary of State Mike Pompeo at the State Department on April 3. State Department Deputy Spokesperson Robert Palladino said Pompeo “stressed that the United States will continue to promote accountability to advance reform in the DRC.”

Democratic Republic of the Congo Terrorism

Image: Congolese President Felix Tshisekedi said at a meeting at the Atlantic Council in Washington on April 4 that he is seeking a “strategic partnership” with the United States. (Jeff Malet/Jeff Malet Photography)