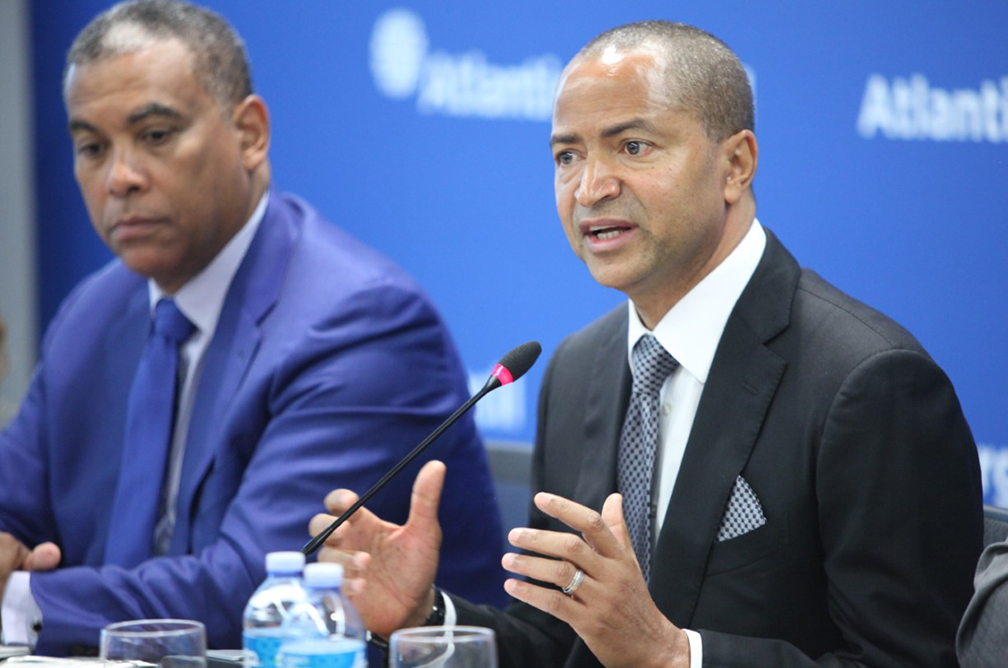 Moise Katumbi, the Democratic Republic of the Congo’s leading opposition candidate for president, has urged the international community to use sanctions to press Congolese President Joseph Kabila to give up power. A political crisis in a country where war claimed around five million lives between 1994 and 2003 could create instability that spreads to the DRC’s neighbors, he warned.

“If there is no sanction, the massacre is going to continue,” Katumbi said at a roundtable discussion hosted by the Atlantic Council’s Africa Center in Washington on July 13. J. Peter Pham, director of the Africa Center, and retired Gen. James L. Jones, Jr., chairman of the Atlantic Council’s Brent Scowcroft Center on International Security, also participated in the event.

The international community is worried about the DRC heading toward a political crisis. Kabila has provided no indication that he will respect the two-term provision in the constitution and step down when his second term expires in December. He took power in 2001 after his father, Laurent Kabila, was assassinated by a bodyguard. He was elected president in 2006 and again in 2011.

Jones, who served as national security advisor to US President Barack Obama, said it is important for Kabila to make the right decision and relinquish power. “He seems to be willing to bring the people of the DRC into an era of perhaps bloodshed and even extreme violence, which everybody wants to avoid,” he said.

The DRC has never had a peaceful, democratic transition of power since it won independence from Belgium in 1960. Kabila, whose second elected term as president expires in December, is constitutionally ineligible to seek another term. Elections are due to be held in November, but Kabila’s critics, including Katumbi, have expressed concern that the election will be delayed to allow the president to stay in power longer. Kabila has not publicly declared his intention to leave office this year and in a hint of things to come, the election commission has said elections cannot be held for another sixteen months.

“The plan for the opposition is to see how to stop this maneuver from President Kabila,” said Katumbi. Most opposition figures who have publicly spoken out against Kabila are in prison today, he added.

Katumbi, who served as governor of the southern Katanga province from 2007 to September 2015, faces arrest after a Congolese court sentenced him in absentia to three years in prison for illegally selling property.

“I am going back. I think they are going to punch me on my face,” he said.

Earlier in July, Katumbi claimed that he was poisoned as part of a government plot to kill him. “Their plan was to kill me because they are scared about my popularity,” he told the Associated Press.

Katumbi said the opposition will ensure that Kabila respects the constitution and will hold public demonstrations to put pressure on the president.

“If Kabila doesn’t not want to leave a legacy we are not going to do a coup d’état. We are going to do a peaceful demonstration,” he said.

“That’s why we need your support on the sanctions because Congolese people don’t have guns,” he said.

In June, the US Treasury Department imposed sanctions on Celestin Kanyama, police commissioner in the DRC capital, Kinshasa, for “contributing to the conflict” in the region. “As President Kabila’s constitutionally limited term nears its end in December, the regime has engaged in a pattern of repression, including the arrest of opposition members and violent suppression of political protests, all to avoid scheduling national elections,” said John E. Smith, acting director of the Treasury’s Office of Foreign Assets Control.

Sen. Edward J. Markey (D-MA), the top Democrat on the Senate subcommittee on Africa and global health policy, attended the meeting with Katumbi at the Atlantic Council. In May, Markey co-sponsored a resolution that called on Obama to work with regional and international partners and the United Nations to “impose targeted sanctions on those officials…who are responsible for violence and human rights violations and undermining the democratic processes or institutions of DRC, including visa bans and assets freezes.”

Katumbi described the DRC, a country comparable in size to Western Europe, as the heart of Africa.

“If my heart is sick all my body is useless,” he said while seeking support from the United States and the African Union for a peaceful transition in his country.

“If Congo is sick, the neighboring countries are going to have a problem,” he added.

Image: “If Congo is sick, the neighboring countries are going to have a problem,” Moise Katumbi (right), the Democratic Republic of the Congo’s leading opposition candidate for president, said during a roundtable discussion hosted by the Atlantic Council’s Africa Center on July 13. Olivier Kamitatu, a leader of Congo’s G7 opposition coalition, is on the left. (Atlantic Council/Victoria Langton)