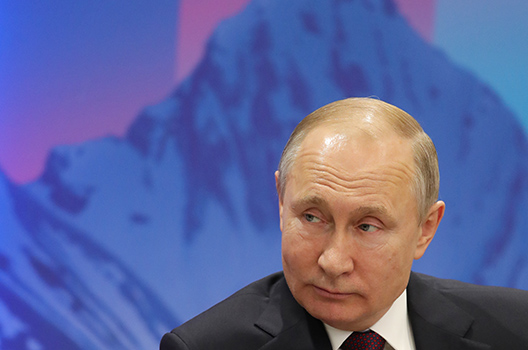 As the US Congress considers passing new sanctions to punish Russia for its aggression in Ukraine, interference in US elections, and material support for Nicolás Maduro’s regime in Venezuela, lawmakers should remain committed to a united approach with Washington’s European allies and ensure that the new legislation maximizes US cooperation with its partners, according to Atlantic Council Distinguished Ambassadorial Fellow Daniel Fried.

Two current bills, the Defending American Security from Kremlin Aggression (DASKA) Act and the Defending Elections from Threats by Establishing Redlines (DETER) Act , have been reintroduced in the US Senate as attempts to mandate the Trump administration place sanctions on Russia in response to specific bad behavior by the Kremlin. The latest sanctions push demonstrates that Congress still “continues to show antipathy towards Russian behavior,” in Ukraine, Eastern Europe, Syria, and other places, according to Atlantic Council Global Energy Center Chairman Ambassador Richard Morningstar, who moderated an Atlantic Council panel on the sanctions measures on April 17. The event was cohosted by the Atlantic Council’s Economic Sanctions Initiative and the Global Energy Center.

Caroline Vicini, the deputy head of the Delegation of the European Union to the United States, stressed that Europe must be kept in mind as Washington looks to counter Russian aggression, especially when sanctions are considered. “Transatlantic unity is what’s really important. Russia wants to split us up and what we need is to try to keep together,” she said.

Vicini worries that certain provisions could have “unintended consequences” for European companies. She offered the example of the US sanctions on Russian oligarch Oleg Deripaska and his aluminum company RUSAL, which “threatened to wipe out the whole aluminum sector in Europe” before the US Treasury Department lifted the sanctions against RUSAL and its holding company EN+ in January.

Fried explained that the commitment of European Union member states to maintain sanctions with the United States immediately after the Russian invasion of Ukraine “is why the sanctions were actually strong.” The economic effects for Europe were real, Vicini added, as European trade with Russia has dropped by nearly 50 percent since 2014. Despite the cost, Fried said, “the European countries most exposed to Russia and most vulnerable to unintended impact of sanctions on their own economies—the Baltic States, Poland, and Finland—took great hits and they were also staunch in maintaining sanctions. They didn’t ask for special breaks.” These countries endured this, he added, “because they thought the overall effort was important. It is important to resist Kremlin aggression.”

Fried lauded the inclusion of an “explicit reference to coordination and cooperation with Europe” within the draft text of DASKA but argued that it “needs to be strengthened and made operational.” He specifically suggested that there “needs to be flexibility and discretion built into the law, so you can take into account the interest of European countries who are actually helping us out.” While Congress is right to push the administration to act against future Kremlin misbehavior, Fried cautioned that “the administration should not be in a position where it has no flexibility to take account of individual circumstances as they come up.”

The two pieces of legislation do have some important features, Fried added, including “going after [Russian President Vladimir] Putin’s cronies, a report on Putin’s wealth, [and] various provisions to identify corrupt Russian money flows.” But, he warned, “sanctions can only be effective” when they “serve a policy purpose and that policy is clear.” DASKA purports to address so many different types of Russian behavior, he explained, that the US government won’t know “what strand of bad Russian behavior are we really trying to stop. And if we are trying to stop all of them, how do we sort out the different tools for doing so?”

David Mortlock, a senior fellow at the Atlantic Council’s Global Energy Center, agreed, adding that additional sanctions needed to clearly answer the question “what are we going to do next if the Russians take that additional step?” For specific future Russian behavior, the United States needs to have a clear “credible threat” of potential response in order to adequately deter this Kremlin behavior.

In this respect, DETER is much better focused, Fried said, because “it is designed as a single-issue bill. It is designed to deter the Russians from interference in US elections, presumably the 2020 presidential elections. It requires the Director of National Intelligence to make a determination as to whether Russia has interfered and then throws a lot of sanctions if he makes such a determination.”

But while DETER’s scope is limited to solely electoral interference, it still uses many of the same sanctions measures as DASKA and other sanctions packages. Amos Hochstein, senior vice president at Tellurian, a former US special envoy and coordinator for international energy affairs at the US State Department, and an Atlantic Council board director, warned that US policy makers are relying too much on sanctions alone to achieve a variety of foreign policy goals. “We are starting to use them when we don’t know what else to do. We just want to punish someone, we just throw sanctions out there,” he said. Sanction measures “are a good tool,” Fried added, but “you can only use [each particular sanction] once.” Policy makers must pick the best use for contingent sanctions otherwise “the deterrent impact doesn’t work.”

Fried did laud DASKA for not putting the United States “into confrontation with Europe” by threatening to slap sanctions on the Nord Stream 2 pipeline project, which the United States has criticized Germany and the EU for allowing to continue. The pipeline project, which would see the construction of additional pipeline infrastructure to carry Russian gas into Europe, would dangerously increase Europe’s dependence on Russian gas and would give Moscow a way to avoid transiting these resources through Ukraine, according to Hochstein.

Despite Washington’s justifiable anger with the project, Fried maintained that it was correct to keep the issue “ambiguous” in the legislation, as any explicit reference could force the US government to impose direct sanctions on European companies over the project. This, Fried believes, would be counterproductive. Ambassador Fried encouraged EU allies to stay closely engaged with Congress, especially if future Russian aggression invokes urgent response from the United States, which could be in the form of new sanctions. “The odds are better than usual for Congress to listen,” he said.  The Countering America’s Adversaries Through Sanctions Act (CAATSA) legislation of 2017 contained an explicit reference to cooperation with Europe and sets a precedent for a successful coordination on future potential sanctions.

Vicini noted that “EU has an energy policy — the Energy Union, the whole purpose of which is to make EU less depended in Russian gas, and to diversify our energy supply.” EU has already approved new rules for its gas directive that will extend EU rules to pipelines coming from a third country, including Nord Stream 2. Among other provisions, these measures will mean that the Russian gas giant Gazprom will not be able to both sell and transport the gas completely, but rather will need to include another company. Vicini also explained that the EU has been “heavily involved in helping Ukraine get up to speed with its own legislation, with its own way of handling the gas transit,” which has resulted in Ukraine becoming “independent of Russian gas.” Fried also added that on the national level, the German government has also shown “it is interested in mitigating the downside risks” of the Nord Stream project.

While concerns remain about the specifics of the proposed sanctions legislation, Mortlock argued that “it is inevitable [that] whatever passes eventually [will look] nothing like what is on the table right now.” Both of the two bills have been previously introduced and changed significantly this second time around, showing that “the Hill is clearly listening to the private sector” and other concerned parties. For Europeans specifically, Fried said he was confident legislators in Congress would be “inclined to listen to our allies.”

Although the experts expressed diverse views on the sanctions legislation, they agreed on the importance of transatlantic coordination in mitigating unintended consequences from the potential sanctions.