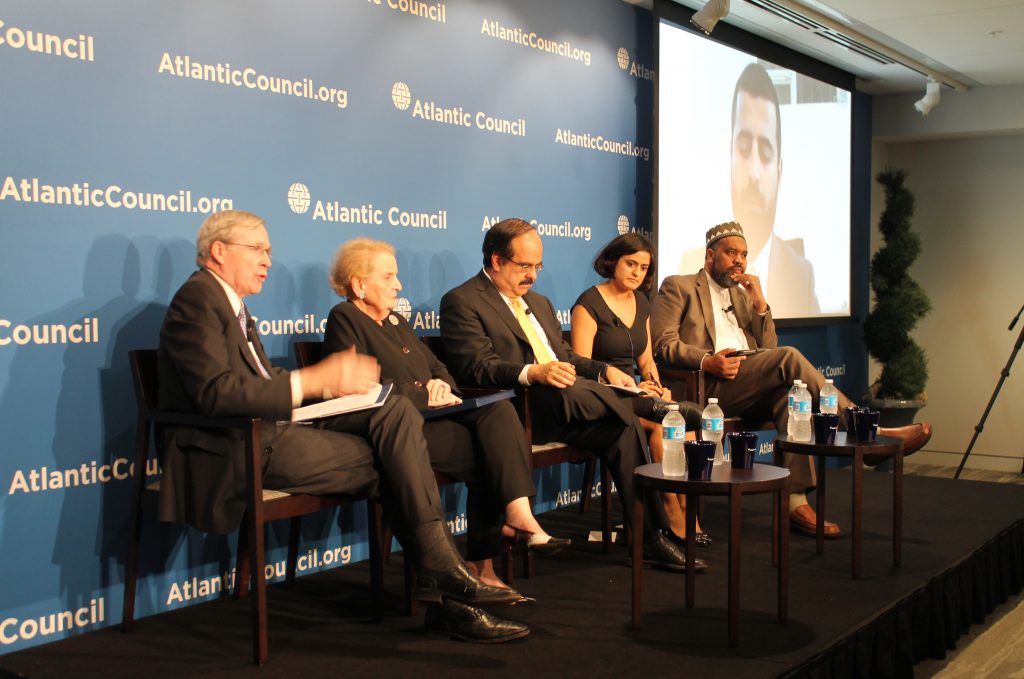 Web-savvy extremists belonging to the Islamic State of Iraq and al-Sham (ISIS) and their online cohort of supporters dominate the conversation on Twitter leaving little hope for the success of US efforts to counter that propaganda, according to a former State Department official.

“ISIS has created, using this kind of jihadist counterculture, a large network of online supporters, and volume matters,” said Alberto Fernandez, a former Coordinator for Strategic Counterterrorism Communications at the State Department.

“On our best day we were outnumbered by ISIS by ten to one. Sometimes it is much worse,” he added.

Fernandez spoke July 9 as part of a panel hosted by the Atlantic Council’s Middle East Strategy Task Force, which is co-chaired by former Secretary of State Madeleine K. Albright and former National Security Advisor Stephen J. Hadley. In a discussion titled “What’s Religion Got to Do with It?” panelists examined the role of religion in empowering extremist movements. Hadley moderated the discussion.

Fernandez, who currently serves as Vice President of the Middle East Media Research Institute, related an anecdote to prove his point of ISIS’ dominance of social media.

In July of 2014, he delegated all of his staff to “jumping” an ISIS hashtag—a way to inundate a Twitter hashtag with unrelated content.

His team “fought a good fight” posting close to 1,000 messages in its effort against ISIS’ #calamitywillbefalltheUS. However, that paled in comparison with the nearly 100,000 messages posted by ISIS supporters who used the same hashtag.

“We were outnumbered ninety-nine to one,” said Fernandez.

There are close to 50,000 pro-ISIS accounts on Twitter of which around 2,000 accounts do the bulk of the work, said Fernandez. “The ISIS media network is always on. They’re like 7-Eleven, they’re always open.”

The gruesome hostage videos that make the headlines are just a tiny fraction of the propaganda videos—often accompanied by music—produced by the militant group, said Fernandez.

Comparing ISIS to a puffer fish that blows itself up to appear bigger, he said, “despite the Western media coverage, most ISIS propaganda is not particularly gruesome.”

ISIS uses a distorted interpretation of Islam to indoctrinate vulnerable youths around the world. It has turned Twitter into an effective tool in this effort.

Imam Mohamed Magid, who serves as the Executive Director of the All Dulles Area Muslim Society (ADAMS) and is involved in countering extremist recruiting and ideology, related how he has worked with some of the youths led astray by ISIS.

Magid recently counseled a few teenage boys in the United States who were determined to join the war in Syria. One of the boys, a Northern Virginia teen who ran a pro-ISIS Twitter account and allegedly helped an older boy make his way to Syria, ended up in prison.

“The reason this young man is in jail after all the counseling is because ISIS never left him alone,” Magid said.

ISIS sowed mistrust between the youths and their family and friends. “They lost all of their social safety net and they became completely vulnerable,” said Magid.

ISIS “created this kind of virtual society and virtual community—that they have your back the same way that gangs function in America,” he added.

Hayder al-Khoei, an Associate Fellow in the Middle East and North Africa program at Chatham House, said via Skype from Tehran that the argument that politics and not religion is at the heart of extremism is nonsense.

While acknowledging that socio-economic grievances and a lack of opportunity play a role in radicalization, al-Khoei said the role of religion must not be ignored.

“It is dangerous to deny that religion plays a role because religious clerics and imams often use scriptures and teachings and interpretations of Islam for destructive purposes, and if we believe this has nothing to do with religion then policymakers miss a golden opportunity to use those very same tools and channels for more constructive purposes,” he added.

Albright, who currently serves as Chair of the Albright Stonebridge Group, said policymakers in the United States must take religion into account to better understand what motivates others to act and how to persuade them how to act differently. For this it is essential to build a solid base of knowledge of Islam, she said.

“The fact is that world events are influenced by people acting out of faith, passion, and a sense of who they are and where they fit,” said Albright. “We saw this in Iran in the late 1970s, in Poland in the 1980s, in the Balkans in the 1990s, and I would argue we see it in the Middle East today.”

“Today, perhaps our worst nightmare is that religion will ignite fears and conflicts that we will be unable to contain. Nowhere is this risk greater than in the Middle East,” she added.

Neha Sahgal, a Senior Researcher at Pew Research Center’s Religion & Public Life project, presented the results of a survey that showed a greater level of knowledge of Christianity and Islam in countries that have mixed populations.

Among Muslims, the rivalry between the Sunni kingdom of Saudi Arabia and Shia Iran has fanned a long-running and violent feud between Sunnis and Shias.

What can the United States do?

Noting that Sunni Arabs are ISIS’ target audience, Fernandez said one way to counter the terrorist group would be to show how it kills Sunni Muslims.

The United States is “clumsy” at supporting reformers in Islam and will need to find ways to have allies who can do that, said Fernandez.

“Particularly since 9/11, the United States has allowed its allies to get away with murder, literally. The money that Saudi invests in the US and the role that it plays to counter Iran in the region has led many in the US to turn a blind eye to this destructive role that it plays,” he said.

“The disproportionate weight that Saudi and its religious establishment has had on the Islamic world has been a result of the political support from the West, and it’s this that has undermined more mainstream Sunni Islam,” he added.

Fernandez described Saudi Arabia as a “house divided” when it comes to terrorism. He said it is a problem that there is no difference between the kingdom’s attitude toward Christians and ISIS’ views on the subject.

“It doesn’t mean that the kingdom of Saudi Arabia doesn’t fight terrorism. It does. But it is a house divided against itself. It both fights terrorism and propagates terrorism,” he added.