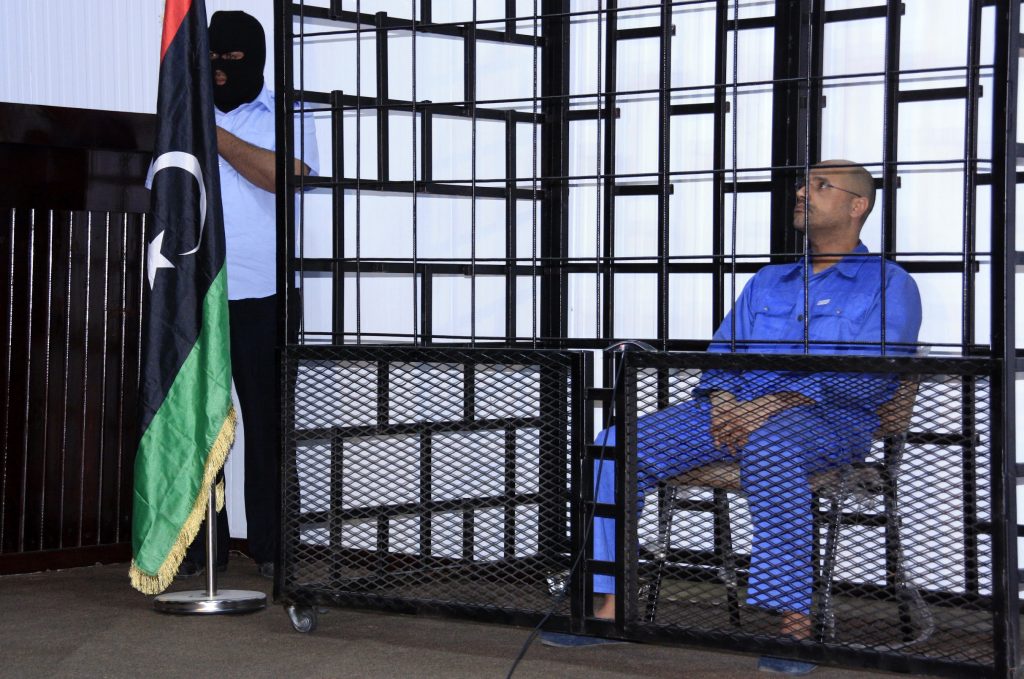 The decision by a Tripoli court to sentence a son of late Libyan dictator Moammar Gadhafi to death by firing squad is the latest in a series of “self-defeating maneuvers” by authorities in Libya’s capital, says the Atlantic Council’s Karim Mezran.

“This was a mock trial,” said Mezran, a Resident Senior Fellow at the Atlantic Council’s Rafik Hariri Center for the Middle East.

“These are worrisome signals of a further unraveling of Fajr Libya’s control of territory in the west. It leaves the international community in a harder position,” he added.

Another signal of this lack of cohesion is the refusal by the Tripoli-based General National Congress (GNC), backed by the Fajr Libya militia, to sign a United Nations-brokered peace treaty with the authorities in Tobruk that has caused rifts to emerge between some militias in Tripoli and some of their allies in the western city of Misrata, he added.

Libya has been plunged into chaos since the ouster and death of its longtime dictator, Moammar Gadhafi, in the Arab Spring uprisings of 2011. Oil-rich Libya today has two power centers—one in the capital Tripoli and the other in the eastern city of Tobruk. Only the government in Tobruk is internationally recognized.

“Whether or not one recognizes the relevance of the government in Tripoli, it is important to note that it is de facto showing signs of increasing fragmentation,” said Mezran.

The sentences handed down July 28 can be appealed before the Libyan Supreme Court. Libyan law, however, limits the court’s authority. The court’s earlier ruling that the government in Tobruk is illegal—a ruling ignored by the international community and believed to have been delivered under pressure from militias that control Tripoli has also delegitimized the court.

It is very unlikely that the death sentence on Gadhafi, who is in the custody of militias in the western city of Zintan that do not recognize the authority of the administration in Tripoli, will ever be carried out.

Karim Mezran spoke in an interview with the New Atlanticist’s Ashish Kumar Sen. Here are excerpts from our interview:

Q: Was this a fair trial?

Mezran: No. This was a mock trial. It will not be recognized by anybody. Evidence was not gathered according to international norms, the defendants were not given open and constant access to lawyers, there were instances where lawyers were threatened and forced to resign.

Mezran: This is the whole problem. In theory it should respond to Tobruk. In reality it responds to the Ministry of Justice of the self-appointed government in Tripoli. So what guarantees of independence are there? Zero.

Q: The defendants will now appeal their sentence in the Supreme Court.

Mezran: Yes, but remember the Supreme Court in Libya is entitled only to review matters of law, not matters of content. There a lot of people who say the court can go into the facts if it really wants to, but then it becomes political.

No matter what, the court has been delegitimized because no one in the West recognized its ruling on the election [that the government in Tobruk is illegitimate].

Q: What message does the court’s ruling send?

Mezran: The GNC [General National Congress in Tripoli] is making these self-defeating maneuvers, like not going to Skhirat [in Morocco] to sign in the agreement in the UN-brokered peace dialogue. Now you have this mockery of a trail.

The court ruling, which is blatantly political, denotes an arrogance and lack of understanding of the domestic and international political sensitivities.

The political message, which is really worrisome, opens a window on what is happening in Tripoli. The formation of a “front of steadfastness” shows a division between the hardliners and the more moderate forces in Tripoli and Misrata; the lack of cohesion on whether to sign the treaty in Skhirat. These are worrisome signals of a further unraveling of Fajr Libya’s control of territory in the west. It leaves the international community in a harder position.

Whether or not one recognizes the relevance of the government in Tripoli, it is important to note that it is de facto showing signs of increasing fragmentation. It is marginalizing itself from the process of reconstruction of Libya.

Q: What control do authorities in Tripoli have over the court?

Mezran: In theory they preach independence, but in practice it is evident that their control is absolute. It is hard to imagine that judges don’t see they are part of a trial that is a mockery. Either you are fully incompetent or you are acting under pressure. I don’t think they are that incompetent not to understand that lawyers have been threatened and no fair trial has been allowed.

Q: Seif is in the custody of militias in Zintan who are aligned with the government in Tobruk. What is the likelihood that they will hand him over to the court in Tripoli?

Mezran: As things stand now, zero. The Zintanis will never carry out a sentence enacted by a court under the jurisdiction of the Tripoli government, which they don’t recognize.

Q: Why have the Zintanis refused to hand Seif over to the government in Tobruk?

Mezran: Officially they say, “We are keeping him here because we know he will not be given a fair trial.”  But for themhe is a bargaining chip with Gadhafi loyalists who are very influential in Tobruk.

Image: Seif al-Islam Gadhafi, son of late Libyan leader Moammar Gadhafi, attends a hearing behind bars in a courtroom in Zintan, Libya, May 25, 2014. He was sentenced to death by a court in Tripoli July 28. (Reuters)