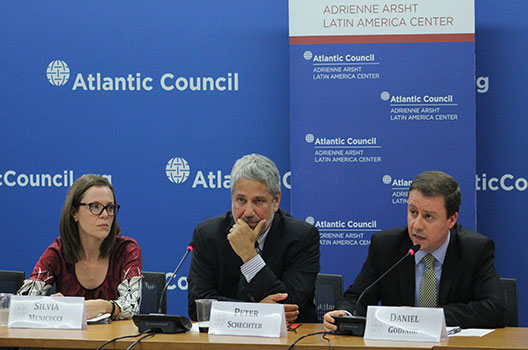 From left: Silvia Menicucci, a foreign trade representative for the Brazilian Confederation of Industries, joined a panel with Peter Schechter, director for the Council’s Adrienne Arsht Latin America Center, and Daniel Godinho, Brazil’s secretary for trade on the future of Brazil’s economy and government on June 28 in Washington. (Atlantic Council/Nicolas Jimenez)

Brazil’s recent political and economic instability, while bringing uncertainty to the region, is also seen as creating an opportunity for the country to refocus its development efforts internationally.

“Times of crisis are times of opportunities,” Daniel Godinho, Brazil’s secretary for trade, said at the Atlantic Council in Washington on June 28.

“There’s a growing consensus in Brazil that in order to guarantee the future, we have to add foreign trade to our strategy,” he added.

The event comes as Brazil experiences unprecedented political turmoil. The country is facing an ongoing impeachment investigation into President Dilma Rousseff and a corruption scandal involving bribery allegations against elected officials with funds from the country’s oil giant, Petrobras. Rousseff has since been suspended by the Brazilian government. Vice President Michel Temer assumed acting presidential duties on May 12. During this tumultuous upheaval, Brazil’s economy has faltered significantly. The country has experienced negative GDP growth, a tenfold increase in inflation rate, and a rising unemployment rate—estimated at 9 percent in the past year. Experts predict similar negative growth again for 2016.

This recession is reflective of Brazil’s current crisis and former policies.

“Brazil’s strategy toward development has always been concentrated on our domestic markets,” said Godinho. While this approach has lifted millions out of poverty and strengthened certain industries, as the prices of domestic goods, such as oil and soybeans, drop, the sustainability of this plan has come into question, causing policymakers to look abroad.

“Since 2015, we’ve managed to sign our very first agreements on investments, and the same with government procurement. We’re getting closer to the Pacific Alliance members and have managed to exchange offers with the EU and the United States,” said Godinho.

“There are a lot of concrete deliverables in terms of market access, with results in trade facilitation and regulatory cooperation,” he added.

Godinho’s words hold weight: Brazil has experienced a record trade surplus in May, it’s currency adjustment against the dollar has helped increased exports, and it recently signed an economic and trade expansion agreement with neighboring Peru.

“We agree with the federal government that foreign trade is fundamental,” contended Menicucci, noting agreements with Chile and Argentina that have strengthened private trade and investment.

In fact, not only are private companies in support of free-trade policies, these firms serve as a platform to promote it. Maia noted that as certain industries, such as services, technology, agriculture, and retail become more competitive internationally, their success will “incentivize” other countries to go abroad.

While initial trade agreements have shown positive results, some are still skeptical of Brazil’s future and question whether the timing of this policy shift is too optimistic. For example, some companies have cut their production, and the prospects for foreign trade are uncertain as political candidates in both the United States and Europe flirt with isolationism.

However, Godinho contended that Brazil would remain engaged in multi- and bilateral negotiations with the European Union, as well as the United States and other trade partners.

“We really are at an inflection point here, where we can open markets of the world to Brazil, which allows us to reconfigure the footprint of Brazil to look outward and not only rely on a domestic demand, which can go up and down,” said Sheridan.

In order to ensure the sustainability of Brazil’s foreign trade relationships, the country has relied on trade negotiations as a “catalyst” for other policy opportunities. However, the country is looking to eventually make their policy more diverse, according to Menicucci.

“To make this strategy and growth really solid and long term, there’s not a silver bullet, we have to take care of all those issues such as trade facilitation, trade agreements, exports, culture in Brazil, and so on and so on,” said Godinho.

When ultimately faced with the question of Brazil’s future, Godinho noted that “Brazil will be better off after this storm…You have to remember, we have done this before [but now] trade facilitation is a real state policy.”