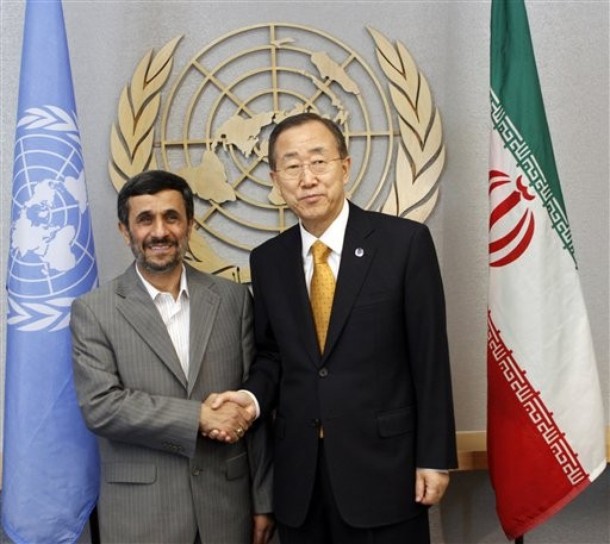 A confluence of events in the next few weeks again will put Iran at the top of the Obama administration’s foreign policy agenda and could shape its course in the months ahead.

The annual United Nations General Assembly this week is likely to include another anti-American, anti-Western, anti-Israel rant from Iranian President Mahmoud Ahmadinejad, while Tehran is doing all it can to undermine the promising Israeli-Palestinian peace talks.

The Iranian economy has been hit hard by the combined impact of the latest U.N. Security Council sanctions, bolstered by sanctions by the European Union and the U.S. Congress. Tehran must soon decide whether to return to the bargaining table — or proceed pell-mell with its nuclear program.

But most significant will be the release of a new National Intelligence Estimate, or NIE, on Iran. It is critically important that this NIE answer the right questions and get the analysis straight.

The 2007 NIE, perhaps leaning over backward after the intelligence community’s faulty finding about Saddam Hussein’s alleged weapons of mass destruction, was a severe setback for U.S. efforts to isolate Iran. It concluded that Iran had halted its nuclear program — contrary to virtually every other major intelligence analysis from Germany, France, Israel and others.

Framing the Iranian nuclear challenge that the United States and the world faces, with a sophisticated understanding of Iran’s domestic reality, its foreign policy and the regional goals, is likely to allow U.S. policymakers to chart the right course on one of Washington’s most critical challenges in the volatile Middle East.

Here are key questions the intelligence estimate should answer:

The intelligence estimate must also assess whether Iran has the capacity to make a nuclear weapon. Does the country possess the technology to produce weapons-grade uranium? Does it have any plants producing plutonium (another way to produce a bomb)? Does it have the ability to miniaturize a nuclear weapon and place it on a missile, capable of hitting Israel, Eastern Europe or U.S. assets in the region?

How much time does Washington have before a nuclear-weapons-capable Iran becomes a reality?

Iran is refusing to answer questions from the International Atomic Energy Agency about its work on more advanced centrifuges or plans to build more enrichment facilities. Tehran barred two experienced IAEA inspectors in June. Would U.N. inspectors today be able to even detect a rapid push by Iran for a weapon?

A crucial issue the NIE must address is whether, because of Iran’s progress, Washington may be required to face the question of can the U.S. accept an Iran that continues to produce enriched uranium but stops short of weaponizing. It is worth learning the intelligence community’s assessment, if there is a consensus in Iran when it comes to nuclear weapons acquisition — even if it will further isolate and harm its economy.

If political change were to happen in Tehran, how would a democratic Iran approach this issue?

If the goal of sanctions is to stop uranium enrichment and force compliance with the Nuclear Non-Proliferation Treaty, should we be satisfied with the scope of the new sanctions that have just passed? Or are there areas that should still be covered by more sanctions? At the same time, how do we and the international community tighten sanctions in a way that does not solidify Iranian public opinion behind the regime?

China has become the biggest foreign investor in Iran. Turkey is planning a major expansion of its economic relationships with Iran. Does Washington have the leverage to convince China and Turkey, a NATO ally, that this is the time for maximum global solidarity against Iran’s nuclear programs? How do Iran’s key trading relationships figure in the way Iran aligns itself strategically and geopolitically?

The administration’s approach to Iran

If sanctions do force Iran back to the bargaining table, it will be critically important to understand from the intelligence estimate what went wrong last October, when Iranian negotiators struck a deal in Geneva with the administration, only to have senior officials in Tehran veto it.

Have their strategic goals changed under increasing international isolation? What do Iran’s depressed economy and political unrest imply for the Iranian negotiating position?

Does a modification of the Turkey/Brazil approach to Iran, which complicated U.S. efforts to get stronger sanctions this summer, have promise? Is that deal dead, or could something else like that be in the works?

Has the regime’s brutal crackdown on the democratic opposition destroyed the regime as a force? Or can it gain power? If the Green opposition took power, would Tehran’s policies toward the nuclear issue, the peace process, the United States and the West, in general, change from the current policy in any appreciable way? It is essential that Washington encourage constructive elements in Iran to mobilize. Is there a way to reach out to the young generation, perhaps in collaboration with others? For example, there are more than 3,000 Iranian graduate students now studying in China, paid for by the Iranian government.

U.S. policymakers must be able to examine realistic short- and long-range options about Iran. The new NIE must provide clarity and context at this uncertain time — and, this time, get it right.