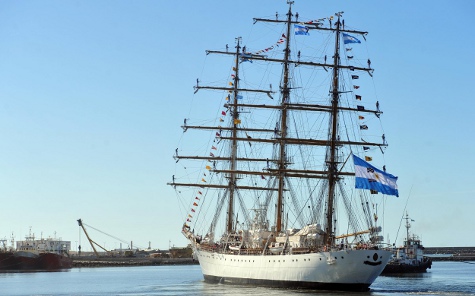 Slowly, but surely, word is getting out about Africa’s overall buoyant economic prospects. What just a few years ago was universally pitied as the “hopeless continent” is today home to six of the world’s fastest growing economies.

While burgeoning demand for the continent’s abundant natural resources is, without a doubt, a key factor in this extraordinary growth spurt one should not forget the important role played by good governance in the states leading the way in what Jeffrey Herbst and Greg Mills have dubbed “Africa’s third liberation” in their eponymous new volume. This point was dramatically underscored this week when authorities in Ghana impounded the flagship of the Argentine navy in obedience to a court order granting relief to a commercial creditor of the deadbeat Latin American country.

The ARA Libertad, a storied tall ship (it once held the world record for a transatlantic crossing by sail) still used for the valedictory training cruise by graduating cadets of Argentina’s naval academy, was in the midst of a six-month goodwill circumnavigation of the Atlantic Ocean when it sailed into the port of Tema, near the Ghanaian capital of Accra, on Monday. Much to the surprise of the ship’s officers and crew, waiting to greet them was a bailiff from the Superior Court of Judicature with an injunction arresting their vessel pending hearings to enforce judgments issued against the Argentine Republic by US federal courts as well as various tribunals in the United Kingdom in favor of investors who lost out when Argentina underwent the largest default in history in 2001, one involving some $100 billion in bonds.

Much of the bad debt was held by pensioners in Germany, Italy, Spain, and other countries who were in no position to contest the stingy terms dictated to them by the Argentine government when it swapped the defaulted bonds for still more bonds at a much reduced nominal value which, in most cases, gave them only pennies on the dollar. However, a number of larger investors balked at the shotgun settlement and demanded full repayment of the money owed to them. These holdout creditors have won more than one hundred court judgments against Argentina in courts around the world. Legal action is made possible because, in the process of getting the loans it eventually defaulted on, Argentina explicitly waived its sovereign immunity, thus rendering enforcement proceedings against it a matter of routine commercial debt collection in common law countries like the United States, England, and Ghana, a former British colony.

The petitioner in the Ghanaian court action against the Libertad, NML Capital Limited, a subsidiary of Elliott Management, a New York-based hedge fund that manages investments for pension funds, university endowments, and other institutional investors as well as some private citizens, has repeatedly won in court, only to find that Argentine officials hid assets so as to obstruct any collection proceedings (one frustrated judge excoriated the Argentine government for its “absolute steadfast refusal to honor its lawful debts”).

It is worth noting that jilted bondholders like investors with accounts at Elliott Management aren’t the only people with claims outstanding against the government of President Cristina Fernández de Kirchner. In May, the Spanish oil and gas company Repsol S.A. initiated the fiftieth case against the regime before the World Bank’s arbitration forum, the International Center for the Settlement of Investment Disputes (ICSID), with a request for $10 billion in compensation over the nationalization of Repsol’s subsidiary in Argentina, YPF. In fact, Argentina has the dubious distinction of having almost six times as many ICSID cases pending against it as all nineteen other members of the G-20 put together (earlier this year, Senator Richard Lugar and Representative Chris Smith introduced legislation calling on the president and the treasury secretary to work to suspend Buenos Aires from the bloc).

The decision by the court in Ghana forbidding the Libertad from leaving the port of Tema is all the more poignant given the stark contrasts between the small West African country and the Latin American regional power. Argentina has twice the population, twelve times the GDP, and eight times the foreign exchange reserves of Ghana. On the other hand, it is Ghana that has the fourth fastest growing economy in the world last year with a 13.6 percent real growth rate in GDP, while, even by official numbers which the International Monetary Fund has publicly labeled questionable, Argentina is on track to have the slowest growth rate in Latin America. And saddled, thanks to the unresolved debt disputes, with some of the highest borrowing costs in the world despite its productive agricultural sector and abundant energy deposit—including third biggest reserves of unconventional shale oil and gas on the planet—it is unlikely that Argentina will emerge from its economic dead end anytime soon. So while, as of the end of last month, investors have picked up a little more than one-tenth of the $3 billion in bonds that the nationalized YPF is trying to sell to raise cash for expanded production (and most of that paper was bought by ANSES, the state pension agency), dozens of foreign companies have competed fiercely to sign on as a partner with the Ghana National Petroleum Corporation in developing offshore blocks.

While Ghana is by no means perfect, it would seem that the African country has learned a few lessons which the crew of the Libertad might do their countrymen a service of picking up while they wait for alternative passage home.

Furthermore, while Ghana was hailed earlier this year by President Barack Obama as “a model” in terms of democratic practices—an observation vindicated not only in July, when Ghanaian President John Atta Mills passed away and the constitutional succession took place smoothly, but currently as President John Dramani Mahama competes for a full term against former foreign minister Nana Akufo-Addo in one of the tightest, but still peaceful, political races anywhere—Señora Fernández and her thuggish son Máximo are busy hollowing out those Argentine institutions that their late paterfamilias Néstor Kirchner did not get around to subjugating during his tenancy in the Casa Rosada.

While this episode may have been planned by Argentina’s creditors with the objective of shaming the country into ponying up the full amount it owes them if, for nothing else, than to avoid the ignominy of having its once proud navy’s flagship seized and sold off to satisfy part of the debt, Africa watchers will derive a different satisfaction from the fact that it simultaneously focused well-deserved attention on not only Ghana’s robust economic performance, but also its commitment to the rule of law and fiscal probity, principles which transcend borders and bridge the expanse of the Atlantic Ocean.