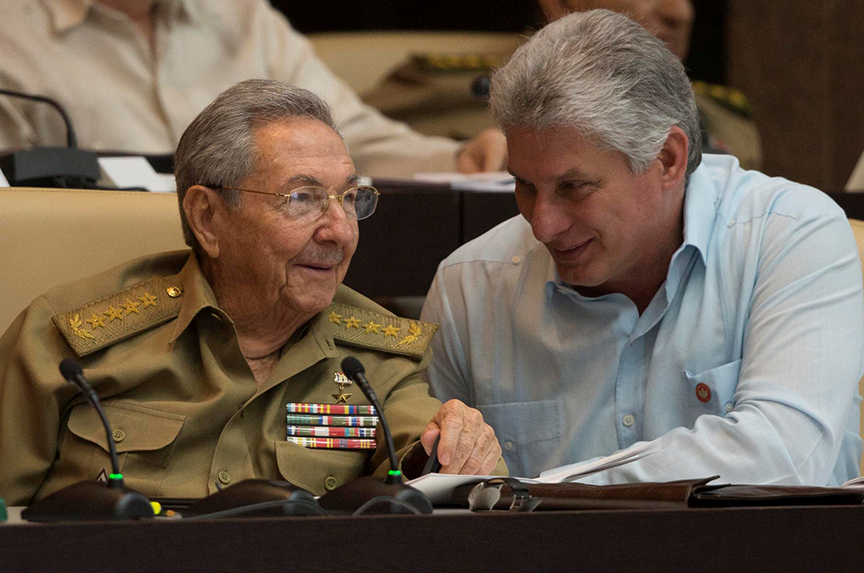 For the first time in sixty years, Cuba will be led by a man whose last name is not Castro. However, this reality is unlikely to herald change in Cuba or soften US President Donald J. Trump’s hard line toward the island that sits just ninety miles off the US coast, according to the Atlantic Council’s Jason Marczak.

“The Trump administration is not going to be refining its Cuba strategy. If anything, it is going to be putting more pressure on Cuba” because of Havana’s support for Nicolás Maduro’s regime in Venezuela, said Marczak, director of the Adrienne Arsht Latin America Center at the Atlantic Council.

Miguel Díaz-Canel, the fifty-seven-year-old vice president of Cuba, was elected president, unopposed, on April 19. He succeeds Raúl Castro, eighty-six, who, while no longer president, will remain a powerful force in Cuba as head of the Communist Party.

Castro groomed Díaz-Canel to be his successor, said Marczak. It was then unsurprising that the new president has promised not to stray from the policies of his predecessors—brothers Raúl and Fidel Castro before him.

Raúl Castro presided over a historic diplomatic opening with the United States in partnership with then US President Barack Obama, and pushed through economic reforms. Trump has rolled back much of those diplomatic gains recalling US diplomats from Havana after they suffered mysterious “health attacks.” The Trump administration also expelled Cuban diplomats from the United States and has made it more difficult for US citizens to travel to Cuba.

With Díaz-Canel at the helm, the prospects for change in Cuba are bleak, said Marczak.

“Some of the reforms that Raúl Castro was able to implement were only possible because his last name was Castro,” said Marczak.

“Miguel Díaz-Canel doesn’t have that advantage with the Communist Party’s old guard when things get tough,” he added.

Jason Marczak discussed what’s next for Cuba in an interview with the New Atlanticist. Here are excerpts from that interview.

Q: What is known about Cuba’s next president, Miguel Díaz-Canel?

Marczak: Miguel Díaz-Canel is somebody who Raúl Castro has groomed to be the next president of Cuba. He was born after the revolution. After college he began in the local Communist Party and has steadily risen through the ranks. He is somebody who is seen as ideologically firm to the Castros’ project.

Q: Díaz-Canel has promised to stick to the line followed by the Castro brothers. So, what will be different? What does Díaz-Canel stepping into the role of president of Cuba mean for the country?

Marczak: Miguel Díaz-Canel as president means very little change for Cuba. Raúl Castro will remain in an influential position in the Communist Party through 2021. At the same time, there is great concern in Cuba about where the country is going. The economy is in quite a predicament.

Some of the reforms that Raúl Castro was able to implement were only possible because his last name is Castro and many of the old guard in the Communist Party gave him the leeway to implement policies that were necessary to right the economy—and maybe were in contradiction to the most pure form of the Communist ideology.

Miguel Díaz-Canel doesn’t have that advantage with the Communist Party’s old guard when things get tough.

Marczak: I expect that the US position vis-a-vis Cuba will not let up anytime soon. Even though the country is no longer led by a Castro I don’t expect President Trump to give Cuba a free pass. In fact, quite the contrary.

At the same time, there are obviously still the reverberations of the sonic attacks [on US diplomats in Cuba], what was the source of those attacks, and the US response. This will be challenging. President Trump is already looking to the 2020 campaign and he believes that a harder stance on Cuba will win him more votes in Florida.

The Venezuelan economy is heading into an abyss. The country is in an economic decline that has never been seen before in this hemisphere. This poses great challenges for Cuba because of the dependence that Cuba has on Venezuela—specifically Venezuelan oil exports that Cuba uses for its own energy needs, but more importantly sells for hard currency on the international market.

The Cubans are well aware of the downfall in Venezuela partly because Cuban intelligence are part of the inner circles in Venezuela. The decline of their main benefactor is something that worries the Cubans who remember very vividly what happened when the Soviet Union, Cuba’s main benefactor at the time, declined. There has been a real push [by the Cuban government] to court additional countries to invest in Cuba.

Q: Does the change of guard in Havana provide an opportunity for the Trump administration to refine its Cuba strategy? If so, what should be done?

Marczak: The Trump administration is not going to be refining its Cuba strategy. If anything, it is going to be putting more pressure on Cuba.

Rightfully so, the Trump administration’s main concern in the hemisphere is Venezuela. The Cubans are deeply involved with perpetuating the crisis in Venezuela. As the situation continues to deteriorate in Venezuela the United States may put additional pressure on the Cubans because of the role that Cuba is playing in helping to prop up the Venezuelan regime.

This is not a relationship that is going to be better just because you no longer have a Castro at the head of government. The broader regional concerns and President Trump’s own domestic politics make it such that any type of lessening of the harder-line approach that the Trump administration has taken is a very unlikely possibility.

Q: What will be Castro’s legacy?

Marczak: Raúl Castro took over from his ailing brother, Fidel, at a time of great uncertainty in Cuba. Up to that moment, Raúl had contented himself to live in Fidel’s shadow. Unlike Fidel, Raúl was not a prominent leader of the revolution. He was elected president in 2008 amid questions about his ability to lead. But he managed to maintain the continuity that many in the Communist Party’s old guard wanted.

As president, Raúl presided over some important developments, most notably the rapprochement with the United States. He also took steps to push economic reform. Both issues were a significant break with his brother’s agenda.

Image: Cuba’s new president, Miguel Díaz-Canel (right), is seen with then Cuban President Raúl Castro during the National Assembly in Havana, Cuba, on July 8, 2016. Díaz-Canel was elected president on April 19, 2018. (Ismael Francisco/Courtesy of Cubadebate/Handout via Reuters)