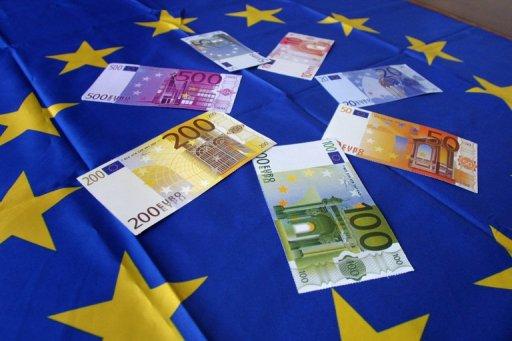 €-Day approacheth and with it the Onion’s day of reckoning. Norway is not in the EU and yet strangely there is no visible sign that civilisation is about to collapse. Quite the reverse! Indeed, it is nice to be in a country that works.

Being a once vaguely red-haired Yorkshireman Viking blood courses of course through my veins. That explains a lot you say. Göll (battle cry), as we Vikings say.

Of course, being a small country (population 4.9 million) with large natural resources helps. Even accounting for depletion Norway controls some 54% of North Sea oil reserves and 45% of gas reserves. More importantly the Norwegians have used the oil and gas bonanza sensibly for when Oslo can no longer call upon nature’s bounty. This sits in stark contrast with much of the rest of Europe which prompted me to pose a rather serious question at this rather serious moment; just how broke are we Europeans?

Someone should ask the question. British Chancer Osborne has just delivered his Autumn Suicide Note and the finance ministers of the Onion’s No-Go Zone met this week to fail to inject a trillion mythical and not enough Euros into the equally mythical European Financial Stability Fund (EFSF). Therefore, your faithful blogonaut pillaged six well-known havens of the dismal economics science to bring you the answer. The six dens of iniquity are in order of self-importance Euro stat, the Economist, the UK Office for National Statistics, Nation Master, the CIA (which knows everything, but tends to forget when it matters) and the Organisation for Extremely Careful Digits (OECD).

Right, pay attention. Apparently we must first distinguish between a national debt and a budget deficit. Still with me? The national debt is the accumulation of all budget deficits since the Battle of Trafalgar, or maybe even before (was there ever a ‘before’ Trafalgar?). The budget deficit, on the other hand, is the shortfall (for that read massive, gaping black hole) between what income a European government generates over a single year and what it spends. To me both seem pretty bad but then again I am only a Viking.

Now, according to Norse legend it is precisely the interaction between debt and deficit that is so exercising the Dark Lords of the Market Universe who seem so determined to bring the halls of Valhalla crashing down. They do this by lending their ill-gotten gains to the very politicians (the Dark Lords (and Lady) of the Political Underworld) who caused this mess in the first place. It is the no-longer electable in pursuit of the utterly corruptible.

Being a tad miffed, the Dark Lords are hiking the cost of ‘their’ money to remind our Dear Leaders that they will have to pay for at least one lunch in their lives. Trapped in the middle are the so-called ‘squeezed’, you and me, who have to service the interest on innumerable, clearly innumerate and quite probably inebriate free lunches by paying more tax, selling off the state that apparently we use to own to someone else or having our savings crushed by the rapacious banks that caused this almighty mess in the first place.

So, Great Hammer of Thor, here are the facts! Let me start with the Americans by way of Euro-comparison. Johnny Yank now has a budget deficit of some $15 trillion or €11.3 trillion which is some 10.7% the size of the US economy with a national debt of 65.2%… Believe me that is big. So, the Yanks are loud, proud and broke, but I suspect we have not heard the last of those people and if anyone seriously expects them to pay they will be nuked – pay-back for the Americans will mean Armageddon. Go ahead, make my day!

Then there is that mythical island long spoken about around Viking fires. The British budget deficit will peak at around 12% of the size of the economy in 2011-12 (Europe’s largest). However, there is some debate over the size of the national debt. The CIA puts it at 59% the size of the economy, the UK’s Office for National Statistics at around 61%, whereas Eurostat has it at some 76.5% (the Euro-Aristocracy could never count properly). This is due mainly to disagreement about how the British account for defence expenditure. However, as I am not aware the British are any longer spending money on defence I will stick to the lower estimate. Either way Britain is broke, weak and confused. Situation normal, all fudged up. Keep calm and carry on.

The ‘best’ of the Onion’s rest speak for themselves. Belgium has a budget deficit at 5.6% and a national debt some 85.4% the size of the economy. At the very heart of the Onion, Belgium now has a historic opportunity to make Europe an image of itself; utterly broke, utterly divided with no effective government and doomed to fall apart unless by some miracle it can persuade all other EU states to scrap themselves and create a federal Europe. I suppose it is the time of seasonal good will and we are approaching Christmas and there are certainly enough turkeys around these days to vote for their own demise. Ireland meanwhile has a budget deficit of 12.2% with a national debt of 38%, which is an awful lot of Guinness. Dublin is thus broke but thankfully has a time-honoured alibi; blame the British.

So, just how broke are we Europeans? Well and truly muggered! So, either Norway offers a fellow Viking asylum, or I invade.