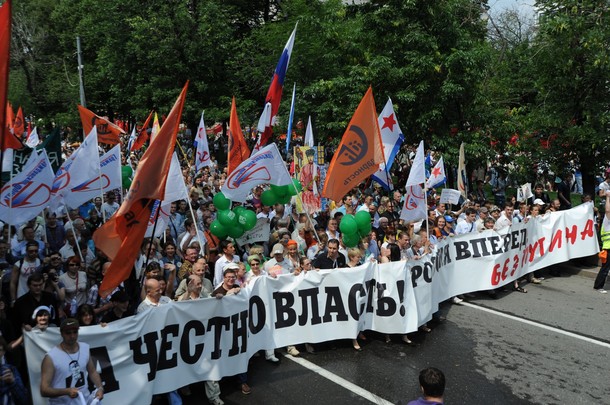 Today is the Day of Russia. It marks the moment in 1992 when the Declaration on Russian National Sovereignty was adopted by the Russian Parliament and Russia re-emerged from the wreckage of the Soviet Union. Back then there was much hope both in Russia and the rest of the free world that this enormous, great country would take its place amongst the true democracies.

Last week the Russian Parliament confirmed a Kremlin-inspired bill which would increase the maximum fines for breaking laws governing protests by 600% for participants and 1200% for organizers. Yesterday police raided the homes of opposition leaders and removed computers and mobile phones.

It is not just the Russian people who are feeling the iron fist of President-for-Life Putin’s Kremlin. Indeed, the Kremlin’s foreign and domestic policies are two sides of the same coin. Last week Moscow announced that it was reopening three Arctic bases that were mothballed at the end of the Cold War to expand Russia’s military presence in the energy-rich High North. Prior to his re-election then Prime Minister Putin announced a doubling of the Russian defense equipment budget over the next ten years, at a time when the US military faces large defense cuts and European militaries are in meltdown.

Two things are happening. First, the Kremlin is moving to entrench power in the tiny elite that run Russia’s so-called ‘sovereign democracy.’ Second, the Kremlin is seeking to mask its assault on Russia’s putative democracy by wrapping itself in the Russian flag. This might appall the sophisticated Muscovites who lead the opposition to Putin but will doubtless appeal to millions of ordinary Russians who understandably equate ‘democracy’ with the chaos of the 1990s and the corruption of the oligarchs. Order and stability are much cherished in Mother Russia.

June also marks the anniversary of both Hitler’s invasion of the Soviet Union which saw some 23 million Russians perish in the Great Patriotic War and Soviet Russia’s defeat of Nazi Germany. In effect, Putin is slowly re-inventing Soviet foreign policy albeit somewhat more modestly, with opportunism the central theme.

At one level the Kremlin has the West exactly where it wants it. The Eurozone crisis is rendering the European Union and many of its member-states utterly impotent. Moscow’s only interest in the suffering of the Syrian people is to remind the West that Russia is a player in the Middle East and block any action that it deems injurious to Moscow’s influence. The Kremlin is trying to build an anti-Western alliance with China through the Shanghai Co-operation Organization and given the need for NATO to re-supply its forces through Russia has the West by the throat over Afghanistan. A divided NATO is also permitting Russia to prevent the much-needed modernization of the Alliance’s collective defense (although the NATO nations do not need much encouragement).

So, is Moscow winning? Well, no. Although the turmoil of the 1990s seems to be over with mortality rates and life expectancy showing signs of recovery from the dark days of the mid-1990s, Russia remains a deeply divided and impoverished society. Moreover, the economy remains dangerously unreformed and dependent on the export of hydro-carbons to fund much of public expenditure which is again growing as the Kremlin re-establishes a system of political patronage not dissimilar to that of the Soviet Union. The irony is that Russian income stems from the very Western economies which the Kremlin continues to insist pose the greatest threat to Mother Russia. Indeed, Russia’s economy is utterly dependent on the West, which explains the Kremlin’s use of Gazprom as a front to seek control over critical European economic assets.

This is but one of many paradoxes in the Kremlin’s foreign and security policy that demonstrate the tension between analysis and policy in Moscow. The threat posed to Russia’s Far East by Chinese economic and military power is growing. Russia may welcome the humiliation of the West in Afghanistan but it could be left with an even greater Islamist threat to its southern republics. Russia claims to seek a stable Europe and yet moves mobile Iskander M nuclear missiles within range of the High North. Russia seeks a strong relationship with the United States and yet remains an utterly implacable opponent to any Washington-inspired move in the UN Security Council to end the strife in Syria, or indeed Iran’s nuclear ambitions.

Some years ago I found myself sitting opposite the Russian Deputy Defense Minister at a NATO-sponsored meeting in southern Germany. Being me I asked the Minister if Russia was a partner in European security or a threat to it. She looked at me quizzically after the interpreter had spluttered and then translated my question. Russia, she said euphemistically, would always have its own interests.

The Kremlin is once again using ‘Russia’ to play its convoluted and complex power games in the name of the state. It all feels terribly Soviet and one can almost see again those old, grey men with their old, grey faces in their expensive furry ‘ushankas’ standing atop Lenin’s tomb celebrating Soviet military might with their wooden-armed salutes. There was much talk of ‘reset’ recently. Until there is a ‘reset’ in the Kremlin’s old-fashioned thinking expect a difficult time.

The Day of the Kremlin is back.