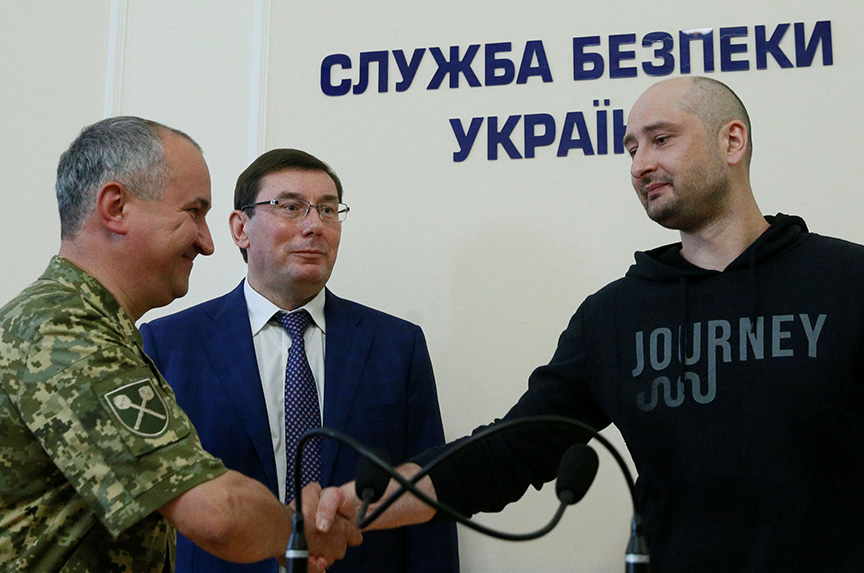 On May 29, the media reported that Russian journalist and Putin critic Arkady Babchenko had been assassinated in Kyiv. He reportedly died in an ambulance on the way to the hospital. On May 30, Babchenko appeared at a press conference, alongside the head of the Ukrainan Security Service (SBU) Vasily Gritsak and Prosecutor General Yuriy Lutsenko, alive and well. The SBU had approached Babchenko and told him that there was a plot against his life. If he would cooperate in a sting operation, they might be able to spare him. It succeeded.

We asked Atlantic Council experts, UkraineAlert contributors, and journalists the following: What’s the upshot of this bizarre plot? Does this staged murder help or hinder the credibility of the Ukrainian government? Are you surprised that the SBU managed to carry out this operation? Should a government lie to its people?

Image: Russian journalist Arkady Babchenko (right), who was reported murdered in the Ukrainian capital Kyiv on May 29, attended a press conference with Ukrainian Prosecutor General Yuriy Lutsenko (center) and Vasily Gritsak, head of the state security service (SBU), in Kyiv on May 30. (Reuters/Valentyn Ogirenko)