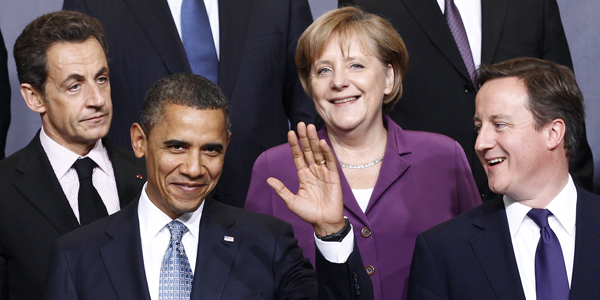 The blistering farewell speech to NATO by U.S. defense secretary Robert Gates warning of a "dim, if not dismal" future for the Alliance drew the Western public’s attention to a longstanding debate about the state of the transatlantic relationship. With prominent commenters voicing concern about much more than just a two-tiered defensive alliance, questioning whether the U.S.-Europe relationship itself is past its prime, doubts that the Western alliance that has dominated the post-Cold War world are reaching a new high.

But those fears are overblown, and may be mistaking short-term bumps in the relationship for proof of a long-term decline that isn’t there. Gates’ frustration with the fact that only five of the 28 NATO allies are living up to their commitment to devote 2 percent of GDP to defense, which has hindered their ability to take on even the likes of Muammar Qaddafi’s puny force without American assistance is certainly legitimate and worrying.

Though the U.S.-Europe partnership may not be living up to its potential, it is not worthless, and that relationship continues to be one of the strongest and most important in the world. Gates is an Atlanticist whose speech was, as he put it, "in the spirit of solidarity and friendship, with the understanding that true friends occasionally must speak bluntly with one another for the sake of those greater interests and values that bind us together." He wants the Europeans, Germany in particular, to understand what a tragedy it would be if NATO were to go away.

Most Europeans don’t see their security as being in jeopardy and political leaders are hard pressed to divert scarce resources away from social spending — especially in the current economic climate — a dynamic that has weakened NATO but, despite fears to the contrary, not the greater Transatlantic partnership.

It would obviously have been a great relief to the U.S. if European governments had shouldered more of the burden in Afghanistan. This disparity, which has only increased as the war has dragged on and the European economies suffered, is driving both Gates’ warning and broader fears about the declining relationship. But it was our fight, not theirs; they were there, in most cases against the strong wishes of the people who elected them to office, because we asked. We’d have fought it exactly the same way in their absence. In that light, every European and Canadian soldier was a bonus.

Libya, however, is a different story. The Obama administration clearly had limited interest in entering that fight – Gates himself warned against it — and our involvement is due in part to coaxing by our French and British allies. The hope was to take the lead in the early days, providing "unique assets" at America’s disposal, and then turn the fight over to the Europeans. But, as Gates’ predecessor noted not long after the ill-fated 2003 invasion of Iraq, you go to war with the army you have, not the one you wish you had.

But the concern goes deeper than different defensive priorities. Many Europeans worry that the United States takes the relationship for granted, and that the Obama administration in particular puts a much higher priority on the Pacific and on the emerging BRICS (Brazil, Russia, India, China, and South Africa) economies.

New York Times columist Roger Cohen recently wrote that this is as it should be: "In so far as the United States is interested in Europe it is interested in what can be done together in the rest of the world." In Der Spiegel, Roland Nelles and Gregor Peter Schmitz lamented, "we live in a G-20 world instead of one led by a G-2."

It’s certainly true that, if it ever existed, the Unipolar Moment that Charles Krauthammer and others saw in the aftermath of the Soviet collapse is over. But that multipolar dynamic actually makes transatlantic cooperation more, not less, important. A hegemon needs much less help than one of many great powers, even if it remains the biggest.

Take the G-20. Seven of the members are NATO Allies: the US, Canada, France, Germany, Italy, the UK, and Turkey. Toss in the EU, and you have 40 percent of the delegation. If they can form a united front at G-20 summits, they are much more powerful than if each stands alone. Add in four NATO Partner countries (Russia, Japan, Australia, and South Korea) and you’re up to 60 percent of the delegation — a comfortable majority for the U.S.-European partnership and its circle of closest allies.

Granted, it’s unlikely that we’ll achieve consensus among all 12 states on any one issue, let alone most issues. But constantly working together toward shared goals and values expands a sense of commonality.

And, like so many things, projects end. Indeed, that’s generally the goal. The transatlantic military alliance that formed to defeat fascism remained intact after victory; indeed, it expanded to include its former German and Italian adversaries. NATO outlasted the demise of its raison d’être, the Soviet threat, and went on to fight together –along with many of its former adversaries — in Bosnia, Kosovo, Afghanistan, and Libya. Is there seriously any doubt that other challenges will emerge in the future in which the Americans and its European allies might benefit from working together?

James Joyner is managing editor of the Atlantic Council. This essay originally appeared in The Atlantic. Photo credit: Reuters.