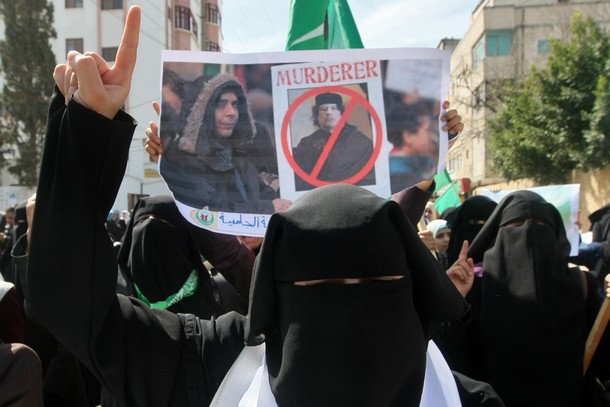 We are today defining a new world order. Not since World War II has mankind witnessed such a realignment of interests, influences and challenges.

This new 21st century global order is being directed by a great diffusion of economic power that has shifted geopolitical centers of gravity. Globalization and technology are the principal forces that have set in motion these defining events: television, trade, the fall of the Berlin Wall, the implosion of the Soviet Union and end of the Cold War, astounding and historic advances in productivity, the jarring gong of 9/11, a digital revolution that produced the Internet, and the worst global financial crisis since the Great Depression. These have been the central agents that have activated this unprecedented time in which nearly 7 billion global citizens live.

Propelling these forces of change is the one constant throughout world history — the human condition. When man is deprived of dignity, without hope and locked into a cycle of despair there will come a confluence of consequences that ripple across the globe.

One of these transformational 21st century centers of gravity is the Middle East. What occurred in Egypt is but one of the new global frameworks that are being constructed. New architecture requires new pillars of support.

The events that began in Tunisia and Egypt and led to the departures of Presidents Zine El Abidine Ben Ali and Hosni Mubarak have irrevocably altered the strategic landscape in the Middle East. U.S. diplomacy is now facing a far more complicated world than it did just two months ago.

The shaky and incomplete transition in Iraq, the 10 years and counting of the U.S. being bogged down in a war in Afghanistan, the Israeli-Palestinian peace talks, combating terrorism, the possibility of a nuclear armed Iran, and the uncertainty of the future not only in Iraq, Tunisia and Egypt, but also Bahrain, Yemen, Libya, Lebanon, Algeria and possibly Jordan, all remain U.S. foreign policy priorities. Now, the new realities of Middle East popular reform are part of the calibration of U.S. strategic thinking and policy.

This chapter in America’s engagement in the Middle East is just the beginning of a volume with many chapters. I was in the Persian Gulf last week to help dedicate the new Georgetown University campus in Doha, Qatar. Those few days allowed me to listen, observe and further reflect on this astounding turn of events in this volatile part of the world.

What is taking place in the Middle East is a humbling reminder of the limits of U.S. power and influence. All great powers have limitations. What is happening in Egypt and elsewhere in the region is really not about the United States. Like the rest of the world, the U.S. has largely reacted as events played out in Cairo. The U.S. can neither control nor predict what happens next in Egypt or any other country in this combustible and complicated region, or any other part of the world. It is an Egyptian story, a Tunisian story, and so on. It will be the Egyptian people who will determine the outcome of Egypt.

These new popular demands for reform in the Middle East have raised difficult questions about the balance between U.S. interests in stability — and support for democracy. This tension is not new. Some analysts now argue that the U.S. may have shortchanged democracy in favor of stability in Egypt. That may be a fair critique, but let’s examine all the dynamics in this dangerous part of the world. While Mubarak stifled democracy and basic freedoms in Egypt, for which there is no excuse or justification, he also upheld the courageous legacy of former Egyptian President Anwar Sadat and kept the peace with Israel for 30 years as the region’s Arab anchor. This peace between these two former rivals has endured for the benefit of Egypt, Israel, the United States, the Middle East and the world.

Continued long-standing U.S.-Egyptian military-to-military relationships will be vital to U.S. policy and Egypt’s democratic transition. There are early positive signs that the Egyptian military establishment, now in charge in Egypt, is fulfilling its commitments to the Egyptian people. It convened a distinguished and credible panel of Christians, Muslims and respected jurists to revise the country’s constitution. Military exchange programs over decades have exposed Egyptian military leaders to U.S. military doctrine and culture, including civilian control of the military and respect for human rights and rule of law. This built a foundation for personal and professional bonds between Egyptian and American generals. However, Egypt is still very much a work in progress.

Although we may be on the cusp of some real democratic reform in the Middle East, the future direction of other individual countries in this region cannot be generalized based upon Egypt.

Tunisia and Egypt are only the beginning and not necessarily signposts for what will happen in other countries where the popular demands for change have taken hold. Leadership, population, demographics, culture, history, geography will all determine each country’s future.

For example, calls for change in Yemen come in the context of a desperately poor and failing state. Bahrain, which hosts the U.S. Navy’s 5th Fleet, has long-standing sectarian and socioeconomic divisions. How events play out in Bahrain and Yemen will have consequences for Saudi Arabia, the other Persian Gulf countries and the U.S., which has vital energy security and counterterrorism interests — including preventing the spread of nuclear weapons in this part of the world. Jordan, Lebanon, Iran, Libya and Iraq are also open questions, driven by the specific conditions in each country.

This unprecedented rate of change in the Middle East will require careful and deliberate planning for peaceful and politically sustainable transitions. There is no one model to apply to how this wave of unpredictability and reform will affect each country of this region, or how the U.S. should or will respond in each specific case.

The Middle East of 2011 has many of the same problems as the Middle East of 2010. The demands for reform take place as some see U.S. influence in the region waning, evident by setbacks in Israeli-Palestinian peace talks, the influence of Iran in Iraq, and the role of a more assertive China, at least economically, throughout the Persian Gulf and internationally.

The uncertainty of the months ahead may, however, bring with it the chance for the U.S. to regain some of the credibility that it has lost as a result of the wars in Iraq and Afghanistan and the continued stalemate in the Israeli-Palestinian peace process.

U.S. diplomacy must continue to actively engage our Arab allies to seize the initiative and begin a dialogue and program of reform with the next generation of Middle East leaders in their parliaments, universities, businesses and civil society sectors. The U.S. should encourage but not interfere. The Arab ruling elites should consider this dialogue and encouragement as a partnership for the future, not a vindication of the past or a threat to the present.

There is a historic opportunity in the Middle East to bridge the gap between rulers and citizens. This is the time for wise, visionary and steady statecraft. These U.S. diplomatic initiatives cannot be considered as optional or secondary. They are vital to U.S. interests and for the peaceful process of change and reform in the Middle East.

Reform and change share the ledger with stability and security; there is no longer a trade-off — and never really was. The U.S. and its allies in the past got away with “transactional relationships.” Dictators and authoritarian governments were accepted and tolerated because they fulfilled the basic criteria which defended our interests. We were often caught — and still are — in the hypocrisy zone standing for democracy but supporting dictatorships. A distinction between reform and stability is now a false distinction. Democratic transitions are as exciting as they are complicated — but always unpredictable. We must remember that democracy is more than an election. In a region where many governments for decades have tolerated little or no space for political thought, debate or opposition, reform will not come quickly, easily or without setbacks.

There is a long and difficult struggle ahead for the people of the Middle East. But there has been a new flame of hope lit in this ancient land that is the cradle of religion and humanity. Individual and societal freedoms that allow men and women to innovate, invent, improve and imagine will never be driven from the human spirit. Human endeavor will always eventually dominate and dictate the course of events. This is the story of world civilization. This is the drama that is now playing out in the Middle East.

Senator Chuck Hagel is chairman of the Atlantic Council. This essay was originally published by the Omaha World-Herald. Photo credit: Getty Images.