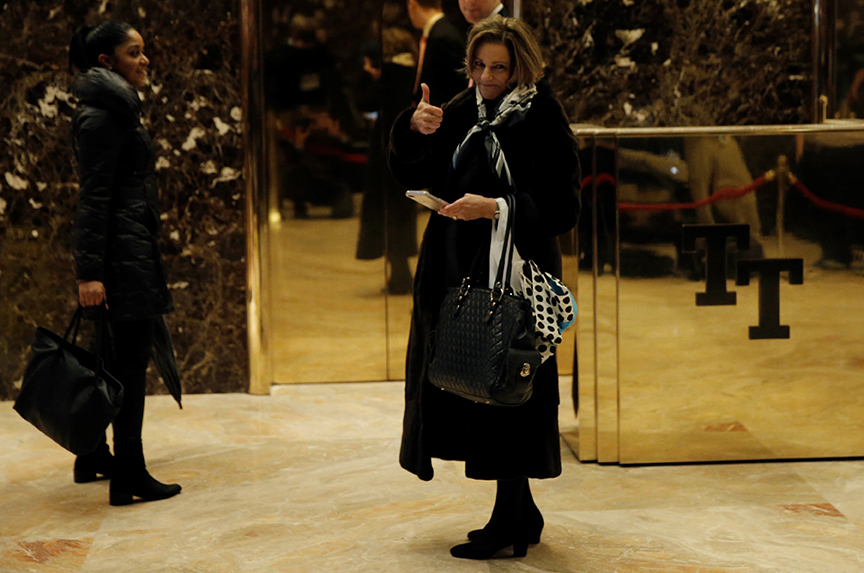 A senior national security advisor to US President-elect Donald Trump said on January 10 that the Democrats are making a mistake by looking for a “scapegoat” on which to blame Hillary Clinton’s presidential election defeat.

“For anybody who wants to blame the loss of Hillary Clinton or the Democrats… you are making a mistake if you think that it is because of some other thing. It is just the American people talking,” said Kathleen Troia “KT” McFarland, Trump’s choice for deputy national security advisor.

“I just think it’s a mistake that the Democrats are making if they continue to try to look for a scapegoat,” she said, adding, “Sometimes it is better to just look and see what their positions are that may have led to the dissatisfaction of the country.”

McFarland’s comment came at a particularly tense moment in a panel discussion at the end of a day-long conference—“Passing the Baton 2017”—jointly hosted by the US Institute of Peace, the Atlantic Council, the Heritage Foundation, the American Enterprise Institute, and the Carnegie Endowment for International Peace.

Responding to a question from discussion moderator Susan Glasser, founding editor of Politico Magazine, on whether Russia had affected the outcome of the US presidential election on November 8, McFarland said: “I will just say what Mr. Clapper said, which is that there is no evidence that whatever the Russians did had any effect on the outcome of the election.” James Clapper, the Director of National Intelligence, told members of Congress earlier in January that Russia had interfered in the presidential elections, but that it was impossible to say whether this had swayed the result.

Jake Sullivan, a former top Clinton aide who is now a visiting lecturer at Yale Law School, in response to McFarland’s comment noted that given Trump’s narrow margin of victory in Michigan, Pennsylvania, and Wisconsin it would be “unreasonable to suggest” that Russian cyberattacks and dissemination of fake news could not have been a factor in tipping the election in the Republican’s favor.

The US intelligence community has concluded that Russia intervened in the presidential elections with the primary aim of helping make Trump the next president of the United States. Trump was elected on November 8.

The Russians conducted cyberattacks on the Democratic National Committee and Democratic officials, including Clinton’s campaign manager John Podesta, and gave the stolen documents to WikiLeaks, according to the intelligence agencies.

The Obama administration responded to this finding by imposing new sanctions on Russian intelligence agencies, entities, and individuals and expelled thirty-five Russian diplomats from the United States.

Intelligence agencies reported that the Russians also hacked the Republican National Committee, but did not share the information gleaned from that hack. On January 10, CNN reported that top US intelligence officials had informed both US President Barack Obama and Trump that the Russians claim to have gathered compromising financial and personal material on the president-elect. Russian President Vladimir Putin has denied the cyberattack claims.

While Trump has taken a more skeptical approach toward the US intelligence community’s findings, and has spoken warmly about Putin, at his first press conference as president-elect on January 11 he acknowledged for the first time Russia’s involvement in the cyberattacks on the Democratic National Committee.

Commenting on the future of the United States’ Russia policy, Sullivan said he was troubled by Trump’s comments that raised questions about whether the United States would come to the defense of its NATO allies should they come under attack, and his suggestion that he could lift sanctions imposed in response to Russia’s aggression toward Ukraine. The principle of collective self-defense is enshrined in Article 5 of the Washington Treaty.

“If the Article 5 guarantee atrophies and America’s word can’t be counted on in Europe, or if we give up on the pressure that we are placing on Russia for its flagrant violation of international law, then I think we all have great cause for concern,” Sullivan said.

McFarland and Sullivan were joined on the panel by Michèle Flournoy, president of the Center for a New American Security, and Stephen J. Hadley, a former national security advisor and chair of the US Institute of Peace’s board of directors.

Noting the bitterness of the recently concluded election, Hadley said that once the dust settles, Americans, particularly the media and policy analysts, must do some soul searching.

US intelligence, military, national security, and foreign service officials must be nonpolitical and “ready, willing, and able to serve whomever the American people elect as president,” said Hadley. “That is terribly important so that a president comes in and can have confidence that those institutions really have the best interests of the country at heart and are willing to serve the new president.”

Hadley pointed to the slew of letters signed by foreign policy analysts and former US officials in the months leading up to the November 8 election that warned of the perils of a Trump victory. “I think they were all well motivated, but I think that the risk is that it had the effect of encouraging a politicization of those institutions and undermined the confidence that the American people and the incoming president could have that they were going to be nonpolitical professional groups serving the president,” he added.

McFarland sought to allay concerns about a Trump presidency, noting in a lighter vein: “All of you relax. It is going to be great and we are going to make America great again!”

She said that the United States is at a unique moment in history and has an opportunity to rebuild its defenses and reinvent itself. Trump’s foreign policy, she added, will be founded on three bedrock principles: American values, American global leadership, and international alliances.

Besides interfering in the elections in the United States, Russia is undertaking a similar operation in Europe where key leadership elections are to be held in France, Germany, and the Netherlands this year.

“There is an active project underway that the Russian president and those around him are engaged in in Europe and the United States and elsewhere to try to chip away at the liberal… institutional order that the United States has built and championed around the world,” Sullivan warned.

“Part of American leadership going forward is going to have to be to rise to that challenge, to meet it, and to prevail so that the basic elements of the order that matters so much to us and our country continue as we move forward,” he added.

Hadley agreed that the liberal world order is under assault.

From talking early in this century about moving toward the West, countries like Russia and China today say: “We have Russian values, we have Chinese values. They are not Western values. We are going our own way,” said Hadley.

“We have gone back, sadly, to an ideological struggle between authoritarianism, which is being propounded by China, Russia, and is catching on in places like Turkey, and democracy,” he said. “There is an ideological challenge to our values… and the challenge for the new administration is what kind of modified, revitalized order can we construct that reflects our values and will provide a framework for dealing with the enormous set of challenges that the new administration faces?”

Flournoy said the Trump administration must, early in its term, articulate guideposts that can “reduce the level of uncertainty and give people a sense that ‘we have enduring national interests and enduring national values, we understand there are a lot of challenges to the rules-based international order that we architected.’”

Besides such reassurance it is also important to bolster deterrence to thwart state and non-state actors that may try and test the incoming administration, she added.

Flournoy predicted that such a test could come as soon as 12:01 p.m. on Inauguration Day in the form of a missile test by North Korea. “The most eager to provoke and the country that wants to thrust itself into the spotlight and onto the American agenda, and onto the world agenda, is North Korea,” she said.

Hadley cited the possibility of a terrorist attack, the uncertainty in Syria, and that the elections in Western European countries could “potentially reshuffle the deck a little bit in terms of the [US] relationship in Europe,” he said.

The challenge for the Trump administration will be managing, and not being consumed by, crises and keeping the eye on the ball for long-term historic opportunities, he added.

McFarland said Trump wants to build America’s defenses so that it doesn’t have to use them. “That is the essence of deterrence. That is peace through strength,” she said. “It is, build your military up so that nobody picks a fight with you.”

Over the long term, Flournoy said Asia should be a top US priority. US President Barack Obama’s rebalance toward Asia has been marked by the Trans-Pacific Partnership (TPP) trade agreement, which has been thwarted by members of Congress. Trump has said he will take the United States out of the multilateral agreement on his first day in office.

“If you take the Trans-Pacific Partnership… out of that equation indefinitely as opposed to saying ‘we are going to tweak it or improve it in some way’ you remove the economic pillar and you leave open the opportunity for China to be able to write the economic rules of the road for a generation or two to come,” said Flournoy.