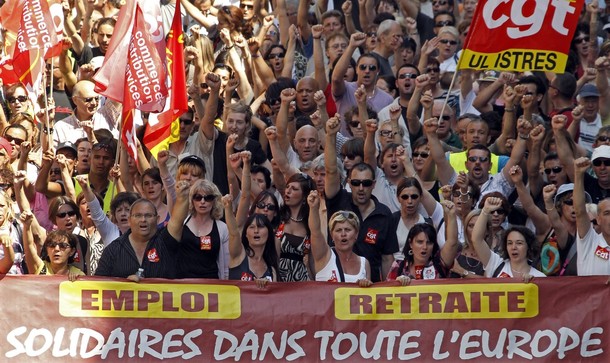 The financial crisis continues to wreak havoc in Europe. Beyond Greece, we’ve been told Spain is especially at risk. But even more established market economies have taken steps towards cutting debt and providing relief to struggling citizens.

Abandoning one of the most powerful symbols of its generous welfare system, France bumped back its retirement age from 60 to 62.

Your first reaction to this might be, “What’s the big deal?” But in France it is a big deal. Along with the 35-hour work week (how many Americans would kill for that?) retiring at age 60 was one of the main lasting heritages of Francois Mitterand’s Socialist government of the 1980s. Retiring at 60 “has come to be seen as an inalienable right, in the same category as paid vacations and health insurance.”

Why the high-profile change? According to France’s Labor Minister Eric Woerth, the move “was made inevitable by Europeans’ lengthening life expectancy, the global economic crisis and an accumulation of government debt.” To supplement the change in retirement age the government also plans to increase the high income tax rate by 1% and increase taxes on capital gains, though these increases in taxes on the wealthy could easily be higher.

Spain is grappling with extraordinarily high levels of unemployment. One in five Spanish workers are now unemployed, and the government is spending about $49 billion per year—which amounts to almost 4% of the country’s GDP—on benefits to support them: the European welfare system, for better or worse. One of the main problems is that when the financial crisis started, about 1/3 of Spaniards in the workforce held insecure, short-term contracts, which meant they could be paid cheaply and fired easily if the economy tightened.

The Spanish government’s proposed labor market reforms look to redress this system. New laws would restrict use of short-term contracts and give bonuses to companies that hire the unemployed on continuing contracts. There will also be incentives to hire the young, and men and women over 45 (usually the ones with short-term contracts). Severance pay will be cut from 45 days per year to 33, and companies will be encouraged to reduce employees’ hours during a crisis rather than fire them altogether.

While all sounding good on paper, these changes will not come cheap. They are projected to cost Spain over $862 million over the next two years. Plus the reforms must still pass through parliament, which is not guaranteed. National spending cuts were approved by parliament last month by just a single vote, leaving the government “looking weak and isolated.” Plus labor unrest is already brewing: union members for Madrid’s Metro system threatened to suspend operations for three days next week to protest a cut in pay.

Germany, France, and the U.K. all plan to institute a bank tax, in attempts to shield taxpayers from bearing the brunt of costs in combating the financial crisis. The European powers have pronounced that financial institutions should make “a fair and substantial contribution” to reimbursing governments for bailouts, and they certainly have a point. But while the U.S. has backed the initiative, other G-20 members such as Canada (host of this weekend’s G-20 summit), Australia, and other emerging nations have spoken out against it.

Leading up to the summit, the EU is calling for global coordination on taxing banks, specifically installing a global financial transaction tax. U.S. President Barack Obama is not on board with this measure yet. The EU also recommends coming to an agreement on when countries should withdraw support and stimulus measures from their financial sectors.

Regarding retirement age, Germany plans to join France in raising its minimum, from 65 to 67. Britain and Italy have settled on 65.

European countries are realizing, as has the U.S., that the way things have been done financially for generations is just not applicable in today’s global economy. Worse, the institutions created by the “old way of doing things” are failing. As unpopular as recently proposed labor and market reforms might be (if the French want some perspective on how good they have it even with a retirement age of 62, they should try working in the States), most would agree they are necessary to turn the tide of the financial crisis.