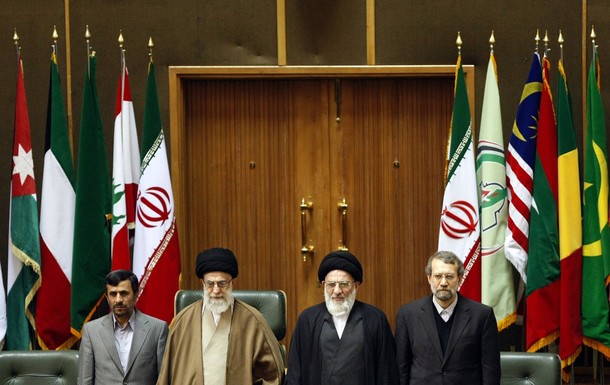 On the tomb of Tamburlaine, King of Persia, there is a dread inscription, “When I rise, the world will tremble”. Faced with Tehran’s seeming determination to develop nuclear weapons the march towards confrontation this week quickened. After threats from Iran to close the oil-vital Straits of Hormuz an American aircraft carrier was joined in the Gulf by British and French warships. Sabres are rattling. The EU placed a ban on all new oil contracts with Iran and froze the assets of the Iranian Central Bank. Whilst not overtly supporting US and EU moves the Chinese Ambassador to London signalled Beijing’s concern that should Iran not develop nuclear weapons. And, on 29th January, inspectors from the International Atomic Energy Authority (IAEA) will arrive in Iran “to resolve all outstanding substantive issues”.

So, war is imminent. No. Forget the pattern of the last fifteen years. There will be no sudden missile strikes just yet. Deterring Iran will take a lot more than old-fashioned sabre-rattling or Cruise compulsion. Now is the time for the five elements of good old-fashioned American statecraft: the formal and clear enunciation of reasoned and reasonable goals upon which to construct a political coalition; the legitimisation of those goals through the United Nations Security Council, including the use of “all necessary means” if Iran does not comply; the formalisation of process via a grouping that will include the major global and regional players; the crafting of a clear set of criteria for the application of all elements of coercion on the spectrum from diplomatic to military action; and the building of a popular coalition through effective strategic communications, much of it via social media.

However, America is of itself insufficient to prevail. The unipolar moment has truly passed. Hard though it is to believe Europeans must also re-learn the art of strategic statecraft lost in the daily haggle that is the EU. Indeed, whilst the EU may have notched up its sanctions regime, there is little or no appetite amongst European allies to move beyond that. After ten years of Afghanistan and Iraq Europe is retreating behind the thin walls of a rhetorical fortress. Even the most pressing of dangers are unlikely to shift the focus from not-saving the Euro with only Britain and France to any meaningful extent still left in the military business.

The US is moving away from a terrorism-related, global policing mission creep back to a much more traditional strategy of strike and punish. Fortress Europe/Strike America is in essence a new strategic modesty driven by precipitous economic decline and reinforced by the rise of China and others onto the world stage no longer willing to accept Western liberal criteria as the basis for global security governance. Threaten military action too soon and America will find itself isolated. Act too late and the world will have changed for the immeasurably worse. Iran does pose a strategic threat.

However, for credible pressure to be built on Tehran whilst agreement within the West is the sine qua non such a ‘plan’ (I cannot stand ‘road-map’ as they never go anywhere) must also be worked up with an unlikely coalition including China, India, Russia and critically the Gulf States and Saudi Arabia. Israel’s critical stake can of course only be uttered in hushed Washington corridors, but managing Tel Aviv will for obvious reasons be critical to American statecraft.

In short, Iran is the first real test of a new world order in which institutions such as the United Nations whilst important to the legitimisation of all attempts to coerce Iran to desist will be secondary to the great power politics that is driving systemic change. In that context Europe must decide if it still in the game or merely the powerless led. There is a world beyond the Euro.

The alternative is stark. Iran will get the ‘bomb’ steering a course through the wide gap that today exists in credible and effective global security governance. If Iran succeeds then the world will be very different from the instant Tehran announces its membership of the nuclear club. Indeed, it is hard to see either Israel or Saudi Arabia accepting such a step change in Iran’s power. The old rationalism of mutually-assured destruction that suffused the Cold War will have little place in the Middle East. The clock is very clearly ticking towards conflict.

To many Americans this call for American statecraft will sound European, woolly and messy, but it is simply reality; the consequence of the world in which the West must now enact its strategic business – patient politics of give-and-take. For, as Christopher Marlowe writes in his epic Tamburlaine the Great, “Wilt thou have war, then shake the blade; if peace, restore it to my hands again, And I will sheathe it, and confirm the same”.