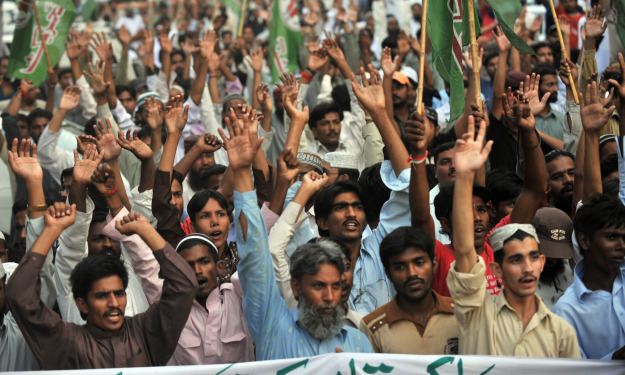 Even as the recently released tell-all Obama’s Wars by Bob Woodward raises fresh doubts about the U.S.-Pakistan relationship and will likely stoke mistrust in the United States about Pakistan as a partner against the Afghan Taliban, a series of stories that paint the Pakistani army in a negative light will undoubtedly contribute to the tensions. These events occur against the backdrop of heightened U.S. drone activity inside Pakistan’s border region and at least two reported NATO helicopter attacks on Pakistani soil. How the Pakistani army sees these events and addresses the ensuing challenges will have enormous impacts on the future trajectory of South Asia, as well as the direction of Pakistan’s fragile democracy.

First, there was the reported kidnapping of The News journalist Umar Cheema and the standard operating procedures of Pakistani intelligence agencies used to humiliate and torture him, according to his detailed account of the incident. Other than denials, there does not appear to be a clear or detailed explanation from the government or the Inter Services Intelligence directorate, Pakistan’s top spy agency, of who did this, nor any indication from the government that a rapid and credible public inquiry is underway. In the absence of such actions, rumors will fly and allegations will be made that will undermine the state and its agencies.

Second, there has been a new viral video released on the Internet purporting to be a record of extrajudicial killing of blindfolded Pashtun captives in civilian clothes by Urdu-speaking (that is, non-Pashtun) soldiers in army uniforms and carrying standard army weapons. The presence of a senior person identified in the soundtrack as "Tanveer Sahib" may implicate an officer in this incident. According to the New York Times, the Pakistani military initially dismissed the video as a forgery. The Times later reported that the army had investigated the incident, found it to be genuine, and promised to act against the perpetrators.

Fairly or not, this video and other negative stories about the army’s operations and its behind-the-scenes role in Pakistani politics will likely be seen within Pakistan as coordinated and hostile actions from outside Pakistan to put pressure on the Pakistan army to bend to U.S. demands on a number of fronts. The army’s readiness to move against the elements involved in these killings speaks to its new and informed leadership. Similar reports of extrajudicial killings in East Pakistan, now Bangladesh, in 1971 were brushed aside by the army at that time. They lost the hearts and minds of the local population, fuelled an insurgency, and created a refugee stream into India that drew that country into invading East Pakistan to help create Bangladesh. By contrast, in June 1992, an incident in Sindh province earlier described by the army in Sindh as an "encounter" with local robbers was openly investigated by the army high command, following a BBC report of killings by an army major as a favor to a local landlord. The major was court-martialed and sentenced to death. Senior officers who failed to investigate the incident adequately and participated in covering it up were removed or dismissed to much public acclaim. The army’s stock went up in the public eye.

The current army chief, Gen. Ashfaq Parvez Kayani, will need to confront this latest allegation head-on and quickly rather than let it simmer and adversely affect public support for the military as well as morale inside the institution. If a "rogue officer" was at work giving his troops an unlawful command to murder civilian prisoners, then the army needs to clear it up in a manner that will identify and bring to court the culprits and help educate the rest of its officers and troops against similar actions. At a time when the civilian government is under stress and economic and political problems have besieged it, it is important that the army is seen as a stable entity working with the government for the common good.

General Kayani also faces a challenge on the border from the U.S. and NATO. A first incursion into Pakistan seemed to have been handled quickly by him and Adm. Mike Mullen to reduce unhappiness on the Pakistan side. They spoke and decided not to add to the public rhetoric. But now an additional incident in Kurram involving a NATO helicopter attack that reportedly killed three soldiers of the Frontier Corps, the paramilitary force that patrols the tribal areas, has led to the closing of the border to NATO supplies for Afghanistan and a public rebuke from the government of Pakistan.

This situation could easily careen out of control. The Obama administration, which is unhappy with what it perceives as Pakistan’s lack of action against anti-American militants, is seriously miscalculating if it is using such tactics to pressure Pakistan to launch operations against its will. Better to argue your case behind closed doors, as allies should — or risk a public split. Similarly, Pakistan risks overestimating its leverage over the United States and NATO by shutting down the coalition’s supply routes across the Durand Line. If anything, this embargo will accelerate the U.S. drive to diversify its logistics chain — while taking money out of Pakistanis’ pockets.

There is some positive news. On Thursday, Kayani announced a fresh list of newly promoted three-star generals, completing his team of senior officers who will outlast his own new three-year term at the helm of the army. By all accounts, he has chosen tried and tested professionals and superseded some Musharraf loyalists. As with the lieutenant generals promoted in April, he has by and large selected apolitical and professional soldiers with a broad, mature view of the world and of Pakistan’s place in it. Many of them have topped their classes at the military academy, winning the Sword of Honour, or have attended advanced military courses abroad, as has Kayani. Here’s hoping they get their chance to prove that Pakistani’s military can be a force for stability in South Asia, and a voice for the rule of law at home.