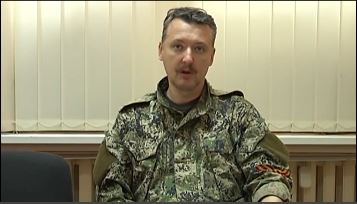 With some inadvertent help from the Kremlin-loyalist daily, Komsomolskaya Pravda, Russian and Ukrainian media have profiled — and outed — Igor Strelkov, the previously unknown military commander at the center of Ukraine’s deadliest separatist violence, in the eastern city of Slaviansk. The Security Service of Ukraine (SBU) identified Strelkov today as a colonel with Russian military intelligence, saying his real name is Igor Girkin and giving his passport information and home address in Moscow. Within hours, reporters from Ukraine’s TSN news program arrived with cameras at Girkin’s Moscow address and interviewed residents who confirmed that the man known as Strelkov is their neighbor, the army colonel Girkin. [UPDATE, MAY 19: Reuters news agency profiled Girkin on May 15, confirming with his spokeswoman in Slaviansk that he has served in the Soviet and Russian armies and is a colonel. Reuters also interviewed residents in northern Moscow, reporting that they confirmed he is an army officer and their neighbor.]

The best portrait of Girkin/Strelkov in his role as commander of Ukraine’s separatist guerrillas, came from Komsomolskaya Pravda, which on Saturday (April 26) published a long, laudatory interview with crisp photos of the smiling officer in his camouflage uniform. For at least some readers outside Russia, that original report disappeared tonight  when parts of the Komsomolskaya Pravda website went offline. While Girkin/Strelkov is certainly a man the Kremlin wants to stay hidden from foreign attention, Komsomolskaya’s profile of him is still available on internet cache websites. And an English translation of the interview also has been posted on Storify. Girkin/Strelkov is likely to become only more central to the Ukraine crisis, as it is his gunmen who have seized the European OSCE military observer team. The most aggressive of the guerrillas fighting to detach eastern Ukraine, Girkin/Strelkov’s men also have detained journalists and local officeholders, and, Ukraine’s government says, were behind the mutilation and execution of two men who publicly opposed them.

In the Komsomolskaya Pravda photos, Girkin/Strelkov is a moustached man in his early forties with receding, salt-and-pepper hair, and a relaxed smile. In the interview, he displays the passports of his OSCE captives, declaring them spies sent to probe Russia’s troops buildup across the border from Ukraine. “They had equipment on them,” he says suggestively, but declines to say what this incriminating evidence was.

Komsomolskaya doesn’t ask (or at least doesn’t report) about Girkin/Strelkov’s reported status as an undercover Russian military officer. “Where did your squad come from?” its reporters do ask, and Girkin/Strelkov offers only that he formed a squad in Crimea to come and liberate Slaviansk. The wider force he now commands comprises all  “volunteers,” two-thirds of them Ukrainians, including “refugees” from such central Ukrainian cities as Zhytomyr and Vinnytsia. No word on who the non-Ukrainians are. All of his men have fighting experience, he says – in Chechnya, Central Asia, Iraq, the former Yugoslavia and even in Syria. All their weapons, he says, they seized from Ukraine’s police and military. “Russia so far has given us not one assault rifle, not one bullet.”

The article suggests that Girkin/Strelkov’s authority is expanding: he is now trying to unite the disparate separatist militias of the Donetsk Basin (Donbas) region under his command, and has been holding talks with the declared leader of the separatists in the provincial capital, Donetsk.

And his goals? ”The local militia [from Slaviansk and other areas of Donetsk] don’t want to be dependent on the Kyiv junta, or the junta that will replace them.  Eighty percent of the population want to join Russia.,” he says.  But without specifying where he came from, he declares that: “Those who came with me and those who are joining us have wider goals. We don’t want to stop here, we want to go further and liberate Ukraine from the fascists.”

The extremism of Slaviansk’s separatists is a theme of the media watchdog website Telekritika. Girkin/Strelkov’s civilian counterpart, the “people’s mayor,” Vyacheslav  Ponomaryov, acts as if he owns the place, writes its reporter (who uses the pseudonym Elena Shevtsova to protect herself in a city where the gunmen have taken several journalists prisoner). “That’s either the behavior of a psychopath or the behavior of someone who has such strong backing that he is certain he will never be punished for what he is doing,” she writes.  From either fear or subterfuge, many on Slaviansk’s stage crave autonomy. “Our city has been taken over by terrorists, but we all know Russia is behind this,” says a resident who does not want to be named. Locals talk of the role in funding the separatist campaign of Yura Yenakievsky – itself a popular pseudonym for Yuriy Ivaniushchenko,  a member of Ukraine’s parliament from the town of Yenakievo. Ivaniushchenko is a close ally of the ousted President Viktor Yanukovych, is described in Ukraine’s news media as an organized crime syndicate, and as one of the main beneficiaries of Yanukovych’s corrupt distribution of lucrative government contracts.

At Ukraine’s leading intellectual weekly, Dzerkalo Tyzhnia, editor Serhy Rakhmanny tries to understand the sentiments of the separatist militiamen and supporters he encounters in Donbas – notably Slaviansk and the region’s biggest city, Donetsk. He summarizes the overwhelming anti-Kyiv sentiment he hears: “They are trying to tell us what to do, don’t stick your nose in here, we can take care of our own affairs.”

While Donbas people are angry at the deep corruption and criminality that impoverish their region, none are willing to acknowledge that it was politicians elected from Donbas itself – Yanukovych and his cronies – who produced this mess, Rakhmanny writes.  Rather than Kyiv, it has been local politicians who have dominated this industrial heartland since Ukraine became independent. On a central issue of the separatist agenda, status of the Russian language, residents readily say that no one has been suppressing its use. Still, they are angry, he says: “Don’t teach us what language we should speak.”

Rakhmanny has no trouble speaking with Donbas separatist supporters. They are ready to speak, argue and shout – but, he writes, are not particularly amenable to listening.

Ukraine’s leading news web site, Ukrainska Pravda, focuses on several young men who were severely beaten April 13 at a pro-Ukraine rally in the country’s second-largest city, Kharkiv. In a shocking video clip of the attack, a woman kicks one man, Volodymyr, in the head as he lies injured and bleeding on the steps leading down into the city’s metro system. The kicks fracture his skull, and Volodymyr has had three surgical operations so far. A fourth is planned to replace a piece of his skull.

Finally, the eastern Ukrainian independent news website, Novosti Donbassa, showcases a new foray into Ukraine’s political culture – an exhibit at the National Museum titled  The Mezhyhiria Code. It comprises paintings and artifacts from the abandoned estate  — roughly the size of Monaco – of former President Yanukovych. Paintings, clocks, vases, icons, sculptures, many of them depicting Yanukovych, can be seen in what the show’s curator calls an “excess of bad taste” at the museum, on Hrushevskoho Street in Kyiv, through July 27.

Image: Col. Igor Girkin (who uses the alias Igor "Strelkov," meaning "the shooter") speaks in a video he released the month after he was identified as the commander of Russian-backed rebels in Donetsk. (Photo updated Dec. 18, 2014; Youtube/TheSplus/CCLicense)