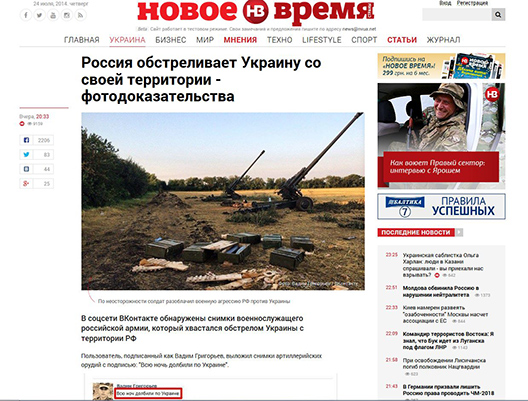 The independent Russian news website Novoye Vremya headlines its story “Russia Fires on Ukraine From Russian Territory: Photographic Evidence.” The photo, by Russian soldier Vadim Grigoriev, shows field guns he says his unit used to shell Ukraine. His account is one of many by Russian soldiers and paramilitaries of their attacks on Ukrainian forces, the website reports. (Novoye Vremya website)

Perhaps he was bragging, perhaps he thought he was doing his job and being patriotic. Whatever the reason, Russian army soldier Vadim Grigoriev recently piled on further evidence of Russia’s escalating – and increasingly direct – attacks on Ukraine. Using Russia’s version of Facebook, the website VKontakte, Grigoriev not only boasted that his artillery unit had been shelling Ukraine, he posted pictures to document it, under the heading “All night we pounded Ukraine.”

Grigoriev wrote that his unit was shelling Ukraine from Mateyevo Kurgan, a district on Ukraine’s border in Russia’s Rostov province. That is directly opposite the Ukrainian district where Ukrainian troops have reported coming under artillery fire while fighting some of their heaviest battles recently with Russian-organized militias. Grigoriev’s Vkontakte posting was quickly removed, but not before the Russian independent news site Novoye Vremya published screen shots of it on July 23.

Grigoriev’s posting adds to the accounts of the shelling and rocket attacks, which already have been photographed, videotaped, and posted on social media by Russian civilians living near the Russian border town of Gukovo. Like Grigoriev, at least some of those civilians had their postings removed from Russian websites – but not before news websites such as The Interpreter and the Ukrainian television program “Podrobnosti” (“Details”) had archived and reposted them, and verified that they were indeed shot from Gukovo. (See Podrobnosti’s July 16 reposting on YouTube of a video of the shelling.)

This also is not the first time that young Russian servicemen have posted photos and stories that confirm Russia’s direct role in making war on Ukraine. Earlier this month, Novoye Vremya recounts, a Russian border guard posted photographs on Instagram of tanks and military vehicles crossing the border into Ukraine.

As Novoye Vremya notes, Russian social media have been full of postings by Russian soldiers or paramilitaries or army veterans about their adventures in the assault on southeastern Ukraine – and also postings in memory of those who have been killed there. One post, on July 14, was written by a young conscript, Vanyok Zherebtsov from Orenburg, a city 920 miles southeast of Moscow. With his unit, he wrote on his VKontakte page, “We are leaving for Ukraine. ” He added photos photos of himself and his army buddies posing in front of military vehicles, and outlined the road he understood they would take to the Ukrainian border. His route was to pass through the southern Russian city of Rostov, which many such posts have identified as a transit and organizational center for Russia’s war on Ukraine’s southeast.

From outside Russia, it’s often not possible for independent news media to confirm the individual accounts such as those by Zherebtsov, Grigoriev, or the citizenry of Gukovo. But the pattern they show is too broad and deep to be dismissed as evidence. And resourceful, independent news organizations have provided spot checks and complementary reporting to show that these accounts are credible. These include courageous independent Russian media such as Novoye Vremya, Ekho Moskvy radio, and the newspaper Novaya Gazeta (partly owned by former Soviet leader Mikhail Gorbachev). The Interpreter (published by the New York-based, non-profit Institute of Modern Russia) and Ukrainian news organizations also have managed to verify such social media accounts.

Novoe Vremya’s article this week notes that Kremlin loyalists in the Russian media dismiss their compatriots’ web postings about Russia’s sponsorship of this war as either erroneous or as disinformation. But the reality is that in a 21st-century world densely populated with cellphone cameras and social media, a major war has become an impossible thing to hide – even in President Vladimir Putin’s Russia.