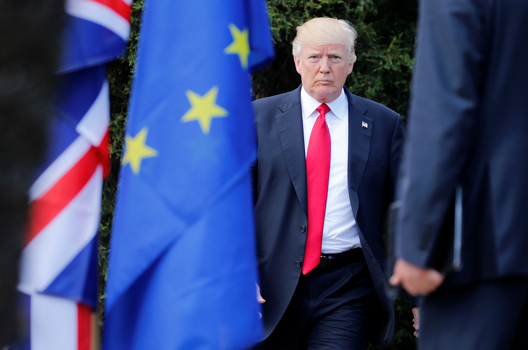 US President Donald J. Trump’s administration aims to position the United States for “energy dominance” as a leading exporter of oil and gas. So far, this vision of US energy dominance has assumed that policies favoring reduced emissions are a hindrance rather than an opportunity.  In fact, the nation’s ability to expand production and compete in the burgeoning global liquefied natural gas (LNG) market, which faces excess supply and weak demand in the near term, may depend on the United States staying in the Paris climate agreement and using its voice to support the role of natural gas in decarbonization.

Ratified in 2016, the Paris Agreement aggregates the national commitments of 195 countries to reduce their greenhouse gas (GHG) emissions and transition to cleaner energy sources. While public attention (and Green Climate Fund resources) have focused on the increased role for renewable energy in developing countries, the reality is that natural gas plays a major role in reducing GHG emissions and meeting new demand for electricity. It is no coincidence that introduction of natural gas has been the major source of emissions reduction in the United States and plays a similar role in Mexico.

If the United States stays at the table in Paris it can pursue an “America First” approach to climate change focused on recognizing the role of natural gas in decarbonization, and the unique role of US LNG in providing lower cost and lower emissions supplies to nations aiming to meet their Paris commitments. Indeed, recent studies show that life cycle emission of US LNG are far lower than those of Russia, and superior, of course, to higher carbon fuels that gas displaces. By staying in the Paris deal, Washington can help US natural gas producers and US LNG export developers develop new global markets for their products and expand existing ones.  Policymakers can support the export of clean and renewable US technologies at the same time.

For some nations, like China, the role of gas (including LNG) is explicit in its nationally determined commitment (NDC). In other cases, like India, the NDC is poor indicator of reality. While India’s NDC does not mention natural gas, the government (based on its Vision 2030 Natural Gas Plan) is introducing five new LNG import terminals, designed to bring import capacity from 17.3 million metric tons annually (MMTPA) in 2013 to 83 MMTPA in 2030, as well as a new network of gas pipelines. China and India are set to be the world’s two largest importers of LNG, with the International Energy Agency (IEA) projecting their total natural gas demand to increase by a combined 150 billion cubic meters (BCM) by 2021. One LNG outlook suggests that China and India increased their imports by a combined 11.9 million tons of LNG in 2016 alone.

In Central America, the Caribbean, coastal Latin America, and South Asia, more nations are trying to fulfill their Paris goals by accessing LNG for power generation. The goal set forth by signatories to the Paris Agreement will result in an increase in gas demand between 2014 and 2040 at an average of 1.9 percent per year, globally—far faster growth than the other fossil fuels.  As countries face the reality of providing baseload supply for large coastal population centers while managing emissions reductions, these estimates could in fact be too low.

The US LNG industry can use the help.  Major US companies, from ExxonMobil and Cheniere to J.P. Morgan and BP, have supported staying in the agreement for good reasons. Three “Cs” threaten the ability of the United States to compete for market share on a global level: competition, credit, and confidence. US LNG faces competition in a market likely to be oversupplied through 2020 from Russia, Qatar, and Australia.  Low-cost gas helps the United States compete in terms of price, but distance to market disadvantages US supplies when compared with Russian piped gas to Europe and Qatari and Russian supply to Asia. However, low emissions LNG distinguishes the US supply, which is significant for countries looking to achieve their NDCs within the terms of the Paris Agreement.

The new class of LNG importers, which has grown from twenty-five to thirty-five countries between 2012 and 2016, are developing nations plagued by weak credit. Multilateral development banks (MDBs) have been ambivalent on financing access to LNG infrastructure and fuel because of their desire to prioritize deployment of renewables. By staying in the Paris Agreement, the Trump administration can use its leverage in these MDBs, and its own approach to climate, to encourage MDB credit support and financing for LNG access as a path to decarbonization.

Finally, new LNG buyers need confidence that US supply is more reliable than others. An expressed White House commitment to Paris, combined with public statements by Trump that LNG permits will not be politicized, can open markets for US LNG supplies in China and India and calm nervous buyers in South Korea and Japan.

A US withdrawal from the Paris Agreement could put all this in jeopardy. Other participating countries may retaliate against the United States with border adjustment tariffs based on carbon emissions, or simply favor LNG sellers who are part of the Paris Agreement (such as Russia, committed to the agreement but a higher emitter in gas production) rather than a country which is not.  The ripple effects could punish independent natural gas producers, who only survive today because of the stabilizing effect of export demand on domestic natural gas prices.

Staying at the table in Paris can be a win for the Trump administration, US gas producers and LNG exporters, major US trade partners, and the global climate. The Paris Agreement is the surest means to grow and secure markets for US LNG for sustained competitiveness, if not outright dominance, during this century.

David L. Goldwyn is chairman of the Atlantic Council’s Energy Advisory Board and has served as assistant secretary of energy for international affairs and special envoy and coordinator for international energy at the US Department of State.

Image: US President Donald Trump arrives for a family photo at the G7 Summit expanded session in Taormina, Sicily, Italy May 27, 2017. (REUTERS/Jonathan Ernst)