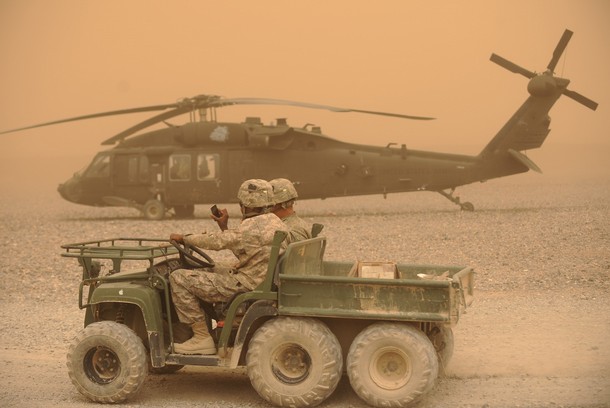 Judging from the media and the blogosphere, there is panic among the Army staff in the halls of the Pentagon these days, as leaders cope with dramatic cuts in force structure and a new defense strategy that appears to favor naval and air power at the expense of the country’s ground forces.

Ironically though, a careful read of the latest strategic defense guidance – the very document that set off the most recent spate of reporting on alarm within Army ranks – makes it quite clear that America’s land force has a clear, vital role to perform following the wars in Iraq and Afghanistan. It lays out requirements for a full-spectrum land force, capable of delivering aid and providing medical care during natural or man-made disasters; conducting limited counterinsurgency and other stability operations; engaging in military-to-military cooperation; deterring adversaries and strengthening alliances through forward presence; assisting domestic civil authorities in disaster response; operating in cyberspace; and – when called upon – defeating aggression through conventional warfare. So, although some may argue that the defense strategy’s reported emphasis on the Asia-Pacific region – a theater long viewed by the US defense establishment as the purview of the Navy – would appear to prejudice any significant Army contribution to US national security, the strategy in fact presents a fairly clear set of missions for America’s land force.

What the strategy lacks, and which is in fact the subject of serious debate within the Army staff and the Pentagon more broadly, is a prioritization of Army missions in an era of extraordinary resource cuts. Having spent nearly a decade enduring the long, hard slog of fighting two wars with an all-volunteer force, struggling to generate and maintain the fighting force demanded for operations in Iraq and Afghanistan, the Army now finds itself on the receiving end of what some perceive to be an order to do more with less.

In fact, doing more with less is impossible, as is doing the same with less, especially as force structure falls to or below pre-9/11 levels – these courses of action will most likely result in an Army that does many things, but none of them particularly well. The alternative – to do less with less – seems the likely outcome, but whether the Army will be capable of successfully fulfilling its missions in such an environment will depend on several factors.

First, the Army must remain focused first and foremost on winning the nation’s wars by maintaining itself as America’s campaign-level military force. The service’s top leadership appears firmly committed to this, having declared that the Army’s primary purpose is indeed warfighting. What remains to be seen though is to what extent the definition of ‘warfighting’ encompasses stability operations, counterinsurgency, and other combat ops short of theater-wide conventional war, which collectively are the equivalent of a four-letter word these days following Iraq and Afghanistan.

Second, when not fighting the nation’s wars, the Army must be preparing to fight such conflicts seamlessly with interoperable allies. Given the imperative placed on fighting alongside coalition partners by National Security Strategy, the National Military Strategy, and the new defense strategic guidance, the Army – specifically the active duty force – should be focused on building and maintaining interoperability with America’s most capable, most likely future coalition partners through multinational exercises and training events across the spectrum of conflict. Building less capable partners’ capacity for self-defense and regional stability, while important, should be the purview of the reserve component.

Finally, given the downsizing in force structure, the closure of overseas bases, and cuts in the acquisition budget, scalability in Army functions will be vital. The new defense strategy preaches something similar – reversibility. But the challenges associated with, for example, quickly reversing course on a shuttered acquisition program or opening foreign bases that have been turned back to host nations are too great. Instead, scalability, especially through multinational efforts like NATO’s Smart Defense concept, could permit the Army to pool and share development, acquisition, and maintenance of defense capabilities and platforms in a collective environment and at a much lower unit cost. If and when necessary, those capabilities and platforms could then be built upon or scaled up unilaterally depending on particular operational or strategic requirements.

In many respects, it is indeed a difficult time to be a ‘green-suiter,’ as those who wear the Army uniform are known to their brothers and sisters in arms. Although nobody, including the Army, has a crystal ball capable of predicting where the next conflict will occur, what is virtually guaranteed is that threats to America’s national interests will necessitate the commitment of US soldiers in harm’s way. When that call comes, the Army will find itself most prepared, and most valued, if it can provide the future President with options – to engage in full spectrum operations, to conduct operations seamlessly with America’s most capable interoperable allies, and to scale up capabilities or platforms to meet the unique qualities and challenges of any future security threat.

John R. Deni is a research professor of National Security Studies at the Strategic Studies Institute. The views expressed are his alone, and do not necessarily reflect those of the U.S. Army, the Department of Defense, or the U.S. Government.