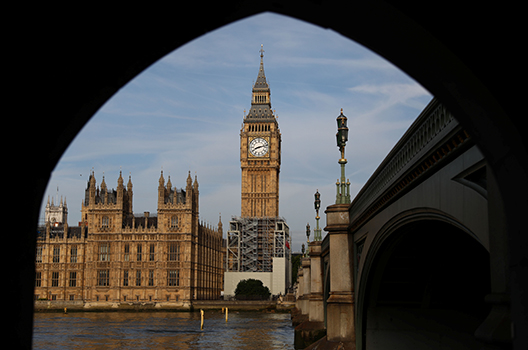 The Elizabeth Tower, which houses the Great Clock and the 'Big Ben' bell, is seen above the Houses of Parliament, in central London, Britain August 14, 2017. (REUTERS/Neil Hall)

Britain appears to be consumed by the chaos of its complex negotiations in the wake of its 2016 referendum vote to leave the European Union. But if the government is floundering, then parliamentary democracy and accountability are flourishing.

There is a vibrancy in the way in which Prime Minister Theresa May has repeatedly come before the House of Commons to deliver statements and face tough interrogation, often from members of her own Conservative Party. There are the intense discussions amongst parliamentarians on what course of action should be taken if, as it is generally assumed, the prime minister’s withdrawal agreement with the EU is rejected in a key vote scheduled for December 11. And while Brexit dominates headlines, Parliament’s power, as well as its influence, was demonstrated most unusually a few days ago when a US businessman was escorted to Parliament and compelled to hand over documents on Facebook’s activities as part of a committee inquiry into fake news.

The prime minister’s stamina is astonishing. Since November 15 she has made three major statements on Brexit negotiations to the House of Commons, facing severe interrogation from critics and with relatively little support, even from her own party. In the same period, she has had to endure similar interrogation three times during her weekly appearances in the House of Commons for prime minister’s questions on Wednesdays as well as appearing before a cluster of parliamentary committee chairmen to answer further Brexit questions. Imagine if US President Donald J. Trump had to undertake such a schedule before Congress. George Washington spared his successors an awful lot of trouble when he decided, after visiting the Senate in August 1789 for abortive discussions on a treaty with the Creek Indians, to conduct his future exchanges with Congress in writing.

But for May and her government the real ordeal is yet to come. December 3 will mark the start of five days of parliamentary debate on Brexit which will conclude with what the government has promised will be a “meaningful vote” on December 11. The prime minister will have to pull the most amazing rabbit out of a hat if she is to win her vote, with political analysts currently predicting that she could lose it by close to 200 votes in the 650-seat House of Commons. In the process, as Britain faces perhaps its most momentous political decision since World War II, May and her Cabinet colleagues will face the most intense scrutiny from both opposition and ruling party members of Parliament (MPs).

Meanwhile, Parliament continues to press ahead with other business. In the past two weeks, at least six Cabinet ministers have appeared in person before the House or at parliamentary committees to defend the policies of their departments. British parliamentary democracy requires them to do so, with a British prime minister lacking the ability of a US president to prevent a Cabinet-level official from appearing before Parliament.

Perhaps the strangest example of Parliament’s power came during the current investigations by the Committee on Digital, Culture, Media and Sport into fake news. The committee had learned that a US businessman, Ted Kramer, was visiting London with documents relating to Facebook’s role in a political scandal that has caused repercussions on both sides of the Atlantic: the harvesting by a UK company, Cambridge Analytica, of millions of people’s Facebook profiles without their consent and subsequent use for political purposes. Hearing that Kramer, an executive with the software company Six4Three, was carrying material thought to contain revelations about Facebook’s role in the scandal, including e-mails from Facebook Chief Executive Officer Mark Zuckerberg, the Committee invoked an ancient privilege and sent one of Parliament’s officers, the Serjeant-at-Arms, to secure the material.

When Kramer refused, he was escorted to Parliament on October 25 and warned that he faced fines or even imprisonment if he did not hand over the materials—a sharp reminder that the UK Parliament is a legal court as well as a national assembly. Two days later, the Committee highlighted the issue when, at a meeting with lawmakers from eight other countries, it held a hearing into Facebook’s role in fake news distribution at which it had requested Zuckerberg to give evidence in person. When he declined the invitation, they placed his name on an empty chair.

But despite all this activity there is a real paradox. There is no indication that there is a natural majority in Parliament for any prospective future relationship between Britain and the European Union, whether it be May’s deal, a so-called hard Brexit, a softer Brexit involving key EU institutions linked to the single market, a full customs union with the EU, or even full continued EU membership. This means that at present one of the most likely options—or perhaps one should say one of the least improbable developments—is that Parliament may finally decide to opt out of further futile debate at this stage and pass the buck back to the British people in the form of a second referendum.