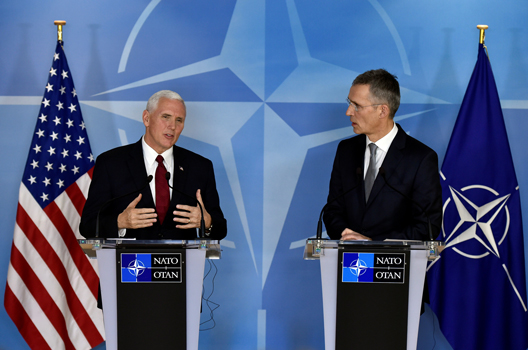 The uncertainty created by US President Donald Trump’s questioning of whether the Alliance remains in the US’ interest has stalled the production of a new NATO strategic concept.

The last NATO strategic concept—the Alliance’s consensus statement on the threats and intended responses—was agreed in Lisbon, Portugal, in 2010. In 2016, some astute observers suggested that 2017 would be a good time to start work on a new concept. By that time, the Russian threat had re-emerged, NATO was mostly out of Afghanistan, and the challenges posed by mass migration from the south and the terrorism that sent people fleeing to Europe had fundamentally changed the strategic environment.

Now, in light of the new US administration, there is no way that the allies will agree to start work on a new concept.

At the Munich Security Conference from February 17-18, the Trump administration’s two leading foreign and defense cabinet officers—Secretary of State Rex Tillerson and Secretary of Defense James Mattis—as well as Vice President Mike Pence, told NATO allies that the United States remains a loyal partner, even if a dissatisfied one. They did not repeat Trump’s assertions that NATO is “obsolete,” or that it had not done enough to fight terrorism.

However, these assurances were not unequivocal. Mattis said that if the allies did not expedite their goal of spending 2 percent of gross domestic product (GDP) on defense, the United States might “moderate its commitment” to NATO. Mattis’ odd phrase, though softer than the language Trump has used, added to allies’ uncertainty and clarifies very little. Was this another way of expressing Trump’s suggestion that the United States might not honor the North Atlantic Treaty’s collective defense provision if allies were not providing their “fair share” of the defense spending? Or does it mean that the United States would start withdrawing forces from Europe, so soon after it had begun to build them back up in response to a more aggressive Russia?

Mattis did make it clear that the allies would have to make an enhanced commitment to the 2 percent spending goal by the end of 2017.  Just prior to Mattis’ visit, NATO Secretary General Jens Stoltenberg had praised the allies for 2016 defense spending increases and advocated more. If the allies firm up their financial commitments, they may have to do so without knowing the extent of Washington’s commitment to NATO.

The US-generated questioning comes at a time of political turbulence already created by the British decision to leave the European Union, a vote known as Brexit; spring presidential elections in France in which the anti-NATO, anti-EU, and pro-Russian far right Marine Le Pen’s National Front party is expected to make a strong showing; and presidential elections in Germany this fall that could remove from power Chancellor Angela Merkel—Europe’s most reliable leader.

This kind of uncertainty does not create the circumstances in which NATO could develop and agree on a new strategy, nor does it do any good for NATO’s deterrence posture.

This is not the first time in recent history that NATO has needed a new strategic concept but lacked the political consensus to begin preparing it. It happened during former US President George W. Bush’s term in office. The terrorist attacks in New York and Washington on September 11, 2001, in the Bush administration’s first year, were followed by a war against al Qaeda and the Taliban in Afghanistan that the NATO allies supported, and then a war of choice in Iraq to oust Saddam Hussein, which many of them did not. These 9/11 attacks marked the only time NATO’s Article 5, the article which stipulates collective defense, has been invoked. They also turned the strategic environment upside down. The allies managed to make some adjustments to NATO strategy to reflect the fact that the Alliance had suddenly gone beyond Europe to fight alongside the United States in Afghanistan. However, there was no desire to prepare a new strategic concept as long as the United States was led by Bush. Only after Barack Obama became US president in 2009 did the allies feel comfortable about revising NATO’s basic strategic document. In December 2010, the United States and its allies released a new Strategic Concept at a NATO summit in Lisbon, Portugal.

That same dynamic, a willingness to defend allies but reluctance to establish NATO’s strategic posture, seems likely to work again as long as Trump is in the White House. The Alliance will find ways to stay in business and undoubtedly will try to be responsive to the US demand for more defense spending and more anti-terrorism efforts.

The inability to respond to new global conditions resulting from the lack of a strategic concept, however, could have its costs. NATO’s deterrence policy seeks to keep Russia from even thinking about aggressive actions against the West. It may be a good thing if Vladimir Putin isn’t certain how NATO might respond to Russian political meddling or military incursions—some constructive uncertainty. However, if the uncertainty around the US commitment convinces Putin that he can get away with covert intervention in European elections, agitating Russian-language populations in the Baltic States, or even winning concessions from Western states by rattling nuclear sabers, Moscow could be tempted to take a chance.

Deterrence is a potentially fragile commodity. However, with credible political commitment it can sometimes be purchased for a relatively small price. The focus of strategic discussions is, not unreasonably, often on the need for military capabilities that reassure allies and deter adversaries. While a new strategic concept could reinforce NATO’s reassurance and deterrence policies, if the commitment is not credible, for lack of material or political content, Russia might doubt Western resolve, miscalculate and decide to commit an act of aggression against a NATO ally, with potentially disastrous consequences.

Stanley R. Sloan is author of Defense of the West: NATO, the European Union and the Transatlantic Bargain (2016). He is a visiting scholar in political science at Vermont’s Middlebury College, a non-resident senior fellow at the Atlantic Council’s Brent Scowcroft Center on International Security, and a member of the Dūcō experts group. You can follow him on Twitter @srs2_.

Image: NATO Secretary-General Jens Stoltenberg and Vice President Mike Pence give a statement after a meeting at the NATO headquarters in Brussels, Belgium, February 20, 2017. (Reuters/Eric Vidal)