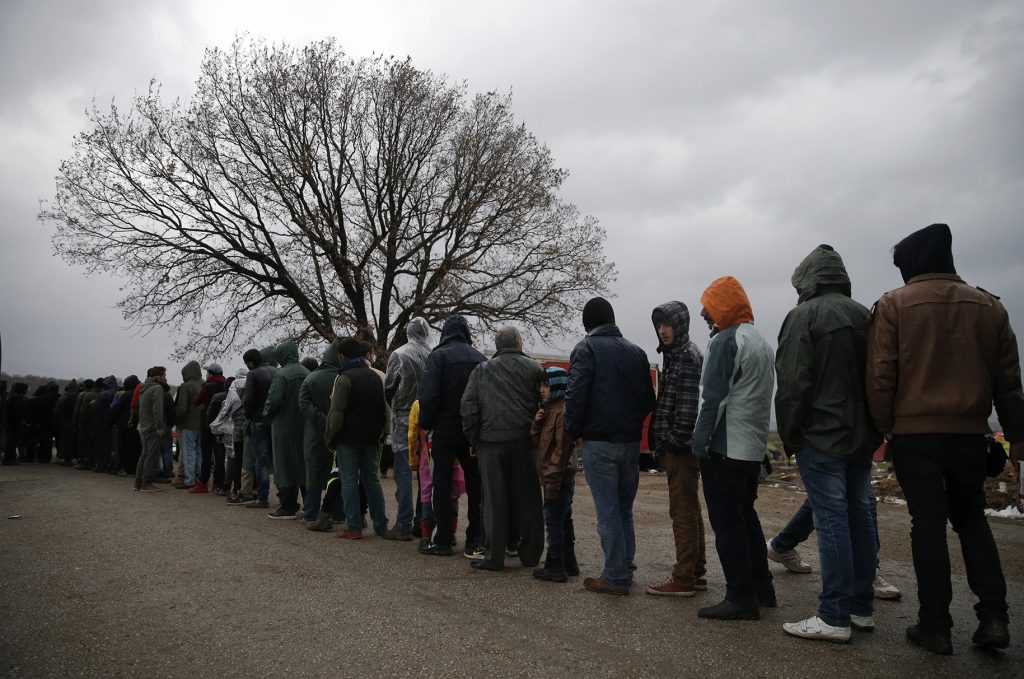 Migrants waiting to cross the Greek-Macedonian border stand in line for food at a makeshift camp near the village of Idomeni, Greece, on March 7. (Reuters/Marko Djurica)

European leaders hope to finalize a deal with Turkey designed to stem the flow of migrants into the European Union. A key element of the deal is a provision for Turkey to take back all new migrants who illegally enter Greece from Turkey. Turkey has exacted a steep price: visa-free access for Turkish citizens into Europe, acceleration of the process to bring Turkey into the EU, and, reportedly, $6.6 billion.

Another key element is largely missing from this news. Greece needs EU assistance and solidarity to cope with the more than 30,000 migrants now stuck in Greece as Macedonia and other Balkan and Eastern European countries have closed their borders. And the flow continues. Aid agencies estimate another 200,000 migrants may arrive in March alone.  These numbers will not diminish anytime soon.

It was not so long ago that the EU was struggling with a way to deal with the perilous economic situation in Greece, the possibility of Greece leaving the eurozone, and even the conceivable exit of Greece from the EU. Statesmanship on all sides overcame rhetoric, and Greece is now attempting to set its economic house in order. This involves massive belt tightening by government and ordinary Greeks already straining domestic politics.

European leaders, led by German Chancellor Angela Merkel, have invested not just financial, but also political capital in securing continued Greek participation in the Euro and membership in the EU.  Any deal that the EU concludes on migrants must include a significant component of assistance to Greece.

The EU has established a three-year $760-million aid package for countries that receive many migrants.   Greece hopes to receive a substantial portion of that aid. However, Greece’s current and future needs are of a different order of magnitude. Greece will also need political support from its EU partners to alleviate the pressures produced by a swelling number of migrants who, once they arrive in Greece, have nowhere else to go.

There is another reason why Greece should get financial and other support from its European partners. It springs from geography, politics, and history. Greece’s location, between Balkan Europe to the northwest and Turkey to the east, puts it at the center of an area that in the post-Cold War period has seen bitter strife.  There have been several instances where Greece and Turkey—both NATO members—nearly went to war, necessitating European and US intervention to prevent such a calamity.

While the likelihood of armed conflict may be minimal, the Turkish presence in northern Cyprus remains an unresolved bone of contention. And the domestic political landscape in both Greece and Turkey remains fragile.  The government in Athens is absorbed in putting the Greek economy in order. In Turkey, President Recep Tayyip Erdogan has been strengthening his position by bearing down hard on political opponents.  Ankara has suffered terrorist attacks. The Erdogan government is a major player in many facets of the armed strife in Syria, and remains ever distrustful of Kurdish ambitions.

Turkey is exacting a high price from an EU weakened by the migrant crisis. The irony is that history could have played out differently.  If the EU countries had been more forthcoming about earlier negotiations on eventual Turkish membership, Ankara would have been the supplicant and the EU would have been in the driver’s seat. The EU would have had the benefit of a gradual increase in its Muslim population, something that is bound to happen even without the Syrian and other crises. Now, however, the shoe is on the other foot, and Ankara has the upper hand.

Marten van Heuven is a lifetime board member of the Atlantic Council.