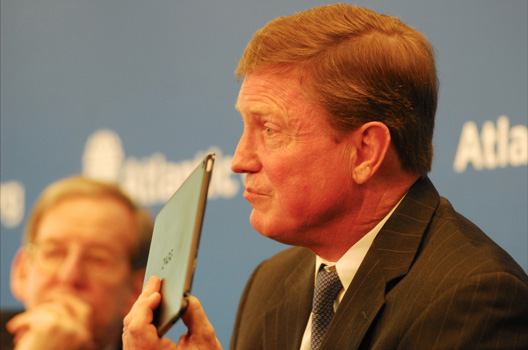 A sound energy policy must not ignore coal and nuclear power, says Thomas A. Fanning, CEO of Southern Co., one of the largest utilities in the United States.

“Let’s take advantage of all the resources we have. Let’s use every arrow in our quiver,” Fanning said at a March 10 meeting hosted by the Atlantic Council’s Global Energy Center.

Global policies must promote not only energy conservation, but also the building of electric infrastructure to increase prosperity, he said.

“Energy security brings national security, not only for folks like us, but for the vast majority of people who have a difficult time participating in economic growth,” said Fanning. “For those families whose parents want for their children a better place to live, more food on the table, a job, growing income and a better life, the energy complex now has the ability to play offense in that environment.”

Richard L. Morningstar, Founding Director of the Global Energy Center and a former US Ambassador to Azerbaijan, moderated the discussion with Fanning.

“Renewables and energy efficiency make sense, but you’re still going to need deep infrastructure,” said Fanning, a member of the Atlantic Council’s International Advisory Board and one of the founders of the Council’s Global Energy Center. “Nuclear must be a dominant solution in the world. It is emission-less and therefore we need to develop it.”

Fanning said the United States stands apart from the European Union when it comes to nuclear energy policies. Many of the EU’s 28 member states—including Germany—pulled the plug on nuclear power after Japan’s tsunami-triggered Fukushima Daiichi disaster in March 2011. That decision was “incorrect,” he said.

“We have developed a technology where we can consume coal and still have a smaller carbon footprint than natural gas,” he said. “Maybe 50 percent of the world’s coal reserves are low-grade. That’s perfect for our technology. We’ll gasify it and strip out the CO2. That way we can produce more natural gas, which will be consumed as electricity.”

In Mississippi, he said, one coal-fired power plant generates the equivalent of two million barrels of oil per year. “That could make a lot of sense in a developing economy.”

Atlanta-based Southern Co., with $17 billion in annual revenues, serves 4.5 million customers throughout the Southeast and produces 46,000 megawatts of generating capacity.

Fanning praised the possibilities of NEST, “an adaptive thermostat that learns your behavior and runs your house based on what you do.” With the advent of new control equipment and microchips, he said, “it won’t be not so far in the future that any asset in your house worth $100 or more will have its own control device.”

Image: “Let’s take advantage of all the resources we have. Let’s use every arrow in our quiver,” Thomas A. Fanning, CEO of Southern Co., one of the largest utilities in the United States, said at a March 10 meeting hosted by the Atlantic Council’s Global Energy Center. Richard L. Morningstar (left), Founding Director of the Global Energy Center, moderated the discussion. (Larry Luxner / Atlantic Council)