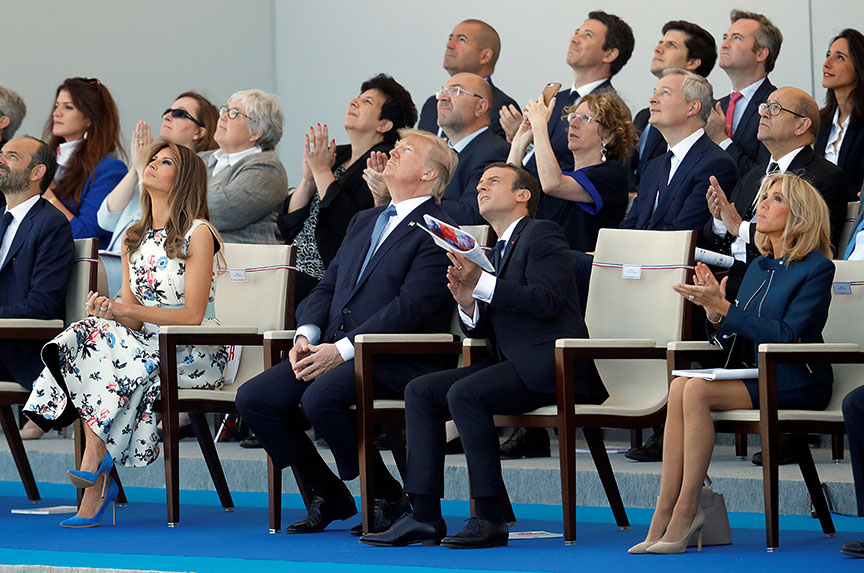 US President Donald Trump and French President Emmanuel Macron attended the Bastille Day military parade in Paris with their wives, First Lady Melania Trump (left) and Brigitte Macron (right), on July 14, 2017. Trump was reportedly so impressed by the display that he asked the Pentagon to host a military parade in Washington. (Reuters/Yves Herman)

Trump, reportedly inspired by the Bastille Day parade he witnessed in Paris last summer, has asked the Pentagon to organize a parade down Pennsylvania Avenue in Washington that [wait for it] tops the French.

The reaction to Trump’s plan has ranged from skepticism to criticism. [Here, here, and here, for example.]

The last major military parade in the United States marked victory in the Gulf War in 1991. George H.W. Bush was president at the time. According to the Washington Post, opinion was sharply divided over the parade.

Other countries hold military parades—ostentatious displays of military might, all intended to send a clear message of nationalist pride.

We take a look at some of these parades.

Soldiers of China’s People’s Liberation Army prepared for a military parade to commemorate the 90th anniversary of the foundation of the army at Zhurihe military training base in Inner Mongolia Autonomous Region in China on July 30, 2017. (China Daily via Reuters)

In July of 2017, Chinese President Xi Jinping presided over a parade in Inner Mongolia that marked the ninetieth anniversary of the People’s Liberation Army. Xi, dressed in camouflage, inspected 12,000 troops, tanks, and missile launchers, while fighter jets roared overhead.

In addition, China commemorated the seventieth anniversary of the end of World War II with a military parade in Beijing in 2015. An equally impressive display, this parade featured 12,000 soldiers, 200 aircraft, and 500 types of military hardware.

This is the one that blew Trump away.

Every July 14, thousands of French troops march down the Champs-Élysées in Paris to commemorate the storming of the Bastille prison in 1789, a turning point in the French Revolution.

In 2017, at the parade Trump witnessed, 145 US soldiers and Marines participated for the first time to mark the one-hundredth anniversary of the United States entering World War I.

Indian soldiers marched during a dress rehearsal for the Republic Day parade in New Delhi, India, on January 23. (Reuters/Cathal McNaughton)

Every January 26, India hosts a parade to mark Republic Day—the day India adopted its constitution in 1950. Troops and military hardware parade down Rajpath in New Delhi with a world leader in attendance. Former US President Barack Obama was the chief guest in 2015. This year, the ten heads of countries belonging to the Association of Southeast Asian Nations (ASEAN) were present.

A military truck carrying a Raad missile drove past a picture of Iran’s Supreme Leader Ayatollah Ali Khamenei (right) during a parade marking the anniversary of the Iran-Iraq war in Tehran on September 22, 2015. (Reuters/Raheb Homavandi/TIMA)

Iran’s annual celebration of “Sacred Defense Week” kicks off with a military parade on September 22. The events commemorate the outbreak of the Iran-Iraq War, which lasted for eight years between 1980 and 1988.

Iran unveiled its latest ballistic missile, Korramshahar, at its parade in 2017.

The North Korean regime regularly holds massive military parades at which it trots out its ballistic missiles and military hardware. The North Koreans seem to jump at every opportunity to host a parade—the birth anniversary of Kim Il-sung, the founder of the totalitarian regime, is a particularly popular date.

This year, North Korean leader Kim Jong-un has ordered a military parade to commemorate the seventieth anniversary of the Korean People’s Army. The parade will be held on February 8, the day before the Winter Olympics open in South Korea.

Russian military vehicles drove along Tverskaya street before the rehearsal for the Victory Day parade in central Moscow, Russia, on May 3, 2017. (Reuters/Sergei Karpukhin)

The Victory Day parade is an annual tradition in Russia. The anniversary marks the defeat of Nazi Germany in World War II.

In 2015, Russia hosted its largest ever military parade to commemorate the seventieth anniversary of the end of World War II. The celebration included more than 16,000 soldiers, 200 armored vehicles, and 150 aircraft.