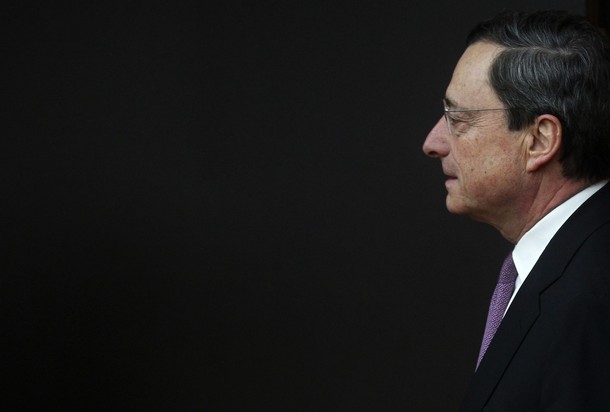 Give Mario Draghi his due: he knows how to stop a bank run. Since the European Central Bank launched its Long Term Refinancing Operation for Eurozone banks, contagion has all but stopped in its tracks.

Even though Greece has now in fact defaulted, Europe’s capital markets have calmed considerably. Three short months ago, both sovereign borrowers and financial institutions in much of Europe’s periphery were experiencing a run that threatened to plunge their already battered economies into a tailspin. Draghi and the ECB deserve credit for crafting a pragmatic and creative solution to the Eurozone’s liquidity crisis.

Despite calls here and elsewhere for the ECB to act as lender of last resort to sovereign borrowers, concerted opposition to such a plan has for now kept that option off the table. Instead, the ECB has found a way to inject liquidity into both banks and sovereign borrowers that serves much the same purpose. The ECB’s LTRO has had three major effects.

Second, banks are being provided with an opportunity to make quite a bit of money. Borrowing €2 trillion at 1% from the ECB and then lending out that amount at 5% or higher to sovereign and private sector borrowers will produce large profits for Eurozone banks over the next three years. These profits will allow the banks to recapitalize through cash flow, which in turn will increase their ability to book losses -if and when there are further European debt defaults or restructurings down the road. The LTRO thus greatly improves the strength of the Eurozone banking system.

Finally, the ECB has relaxed the collateral requirements of its liquidity operations, meaning that the ECB will provide loans secured against poorer quality assets like bank loans and asset backed securities instead of just highly rated sovereign debt. This helps the banks to raise lots of new funding, as too much of their capital has been tied up in illiquid assets. Thus both banks capital needs and liquidity buffers have been strengthened, which is important not just for financial stability, but the real economy as well.

In the short term, this relaxation of collateral requirements should ease the pressure on European banks to raise their capital adequacy ratios by reducing the asset side of their balance sheets – which would mean a credit crunch for European companies and consumers. Instead, banks will be able to roll over more loans and extend new ones. This doesn’t solve any of the structural problems or macroeconomic imbalances within Europe, but it reduces the risk of a vicious spiral of debt deflation overtaking the periphery.

It also, however, means that the ECB, through its member national central banks, is taking much more credit risk onto its balance sheet. This change in ECB lending policy could, if Europe’s economic recovery stalls, shift some of the burden of bad debts from bank shareholders onto Eurozone taxpayers. In the long term, much of this risky private sector debt may turn bad. If so, Eurozone taxpayers will need to recapitalize the ECB.

Many analysts believe that Greece’s default will not be its last. Several countries are also struggling to find a path to growth that can break the cycle of debt deflation. The severe austerity adopted by the peripheral countries, including not only Greece but also Italy, Spain, Portugal, and Ireland, has caused serious harm to their unemployment and growth rates. Outside of Greece, much of the debt that has been accumulated over the years is in the private sector. Many Spanish and Irish homeowners, for example, are underwater on their mortgages and will have trouble making their payments if the job market and/or housing prices don’t pick up soon. By the same token, it will be a long time before construction firms and other real estate related businesses in these countries return to profitability.

By improving the systemic strength of Europe’s financial sector, the ECB is aiming to increase the ability of European banks to book losses as the inevitable debt deleveraging takes place. If European banks have the balance sheet strength to book losses on bad loans that have not yet been realized, the knock on effects on the real economy will be that much less.

On this last point, the recently approved Greek debt restructuring has resulted in the official sector owning approximately 75% of Greece’s outstanding sovereign debt. This is significant because it points to a possible way forward in providing fiscal relief to peripheral countries suffering under imposed austerity regimes.

For political reasons, countries in the core are unwilling to provide the sort of large scale fiscal transfers that could ease some of the economic pain in the periphery. In the United States, when Texas underwent a recession in the 1980’s following the collapse of oil prices, federal funding of deposit insurance, unemployment benefits, Medicaid, infrastructure and other spending acted as an automatic stabilizer and prevented deeper cuts in state spending. But there is no similar mechanism in the Eurozone and the introduction of any such scheme is politically impossible in the short term. Taxpayers in core countries like Germany and the Netherlands are not willing to write checks to Greeks and Italians to soften the adjustment for those countries.

But fiscal transfer need not come in the form of direct payments to cash strapped governments. It could come in the form of debt relief. If Portugal, Ireland, Spain or Italy are unable to grow their way out of their problems and get locked into a debt deflation dynamic, it will be politically much easier to organize debt restructurings if the official sector – the European Stability Fund, the ECB, and the IMF – hold a majority of the debt and can negotiate among themselves about what to do. Restructurings under such a scenario need not lead to financial contagion, and they would finally allow taxpayers across the Eurozone to share in some of the losses, rather than forcing all the pain onto peripheral taxpayers, who cannot afford it on their own.

Of course, there remains the question of how these losses will be divvied up in the event that further restructurings are necessary. These debates will not be easy or resolved quickly. But taking losses on debt held by the official sector can be presented by governments as a necessary to save Eurozone institutions.    Justifying paying for these losses to save the ECB would be a rather more palatable and pragmatic option for European politicians than the suicidal approach of asking voters to approve large fiscal transfers to peripheral country governments.

Since Draghi took over the helm of the ECB, Europe has made great strides in constructing a firewall around its bad debts. Its banks and sovereign borrowers have been given access to cheap liquidity, its banks have been given a path to restoring the health of their balance sheets through cash flow, and the official sector is taking up an ever increasing proportion of the Eurozone’s bad debts. These are important achievements. Now the really difficult task of designing policies that allow the peripheral countries to emerge from austerity and grow their way out of high debt to GDP ratios can begin.