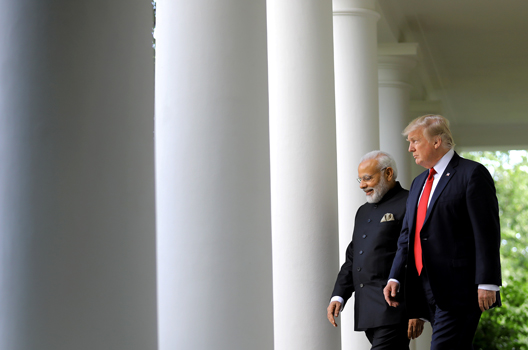 US President Donald Trump (R) arrives for a joint news conference with Indian Prime Minister Narendra Modi (L) in the Rose Garden of the White House in Washington, US, June 26, 2017. (REUTERS/Carlos Barria)

On the eve of US President Donald J. Trump’s first meeting with Indian Prime Minister Narendra Modi in Washington on June 26, the US State Department approved the sale of twenty-two Sea Guardian Unmanned Aerial System drones to India. This prospective purchase of drones manufactured by General Atomics marks the first of its kind from the United States by a country that is not a member of NATO. General Atomics (GA) and its affiliated companies now constitute one of the world’s leading resources for high-technology systems ranging from the nuclear fuel cycle to electromagnetic systems, remotely operated surveillance aircraft, airborne sensors, and advanced electronic, wireless and laser technologies.

Both governments will need to finalize the terms and conditions of this foreign military sale.

In an interview with Bharath Gopalaswamy, director of the Atlantic Council’s South Asia Center, Vivek Lall, chief executive of US and international strategic development at General Atomics, discussed the importance of the deal and its potential impact on the US-India security relationship.

Gopalaswamy: Where does the drone deal between the United States and India presently stand, and what are the next bilateral steps to be taken?

Lall: We are extremely excited that the United States and India have agreed to pursue the sale of Sea Guardian [drones]. Over the coming months, we look forward to supporting the government-to-government talks that will serve to refine and formalize this deal.

Gopalaswamy: How long do you expect it will take to formalize the deal, given the bottlenecks that may arise in international defense deals with India?

Lall: The Indian Navy has an urgent need for the persistent maritime domain awareness offered by Sea Guardian. We hope the two governments conclude their discussions quickly so that this very important capability gets into the hands of our Indian partners soon.

Gopalaswamy: This summer, India received ten advanced Heron drones from Israel for $400 million, making Israel a weapons supplier competitor to the United States. How does this affect General Atomics?

Lall: Although China has increased its naval and commercial presence in the Indian Ocean, it seems unlikely that its naval projection will shift to the Indian Ocean from the South China Sea anytime soon. India has an opportunity to help create and lead a regional balance of power to protect its interests in the Indian Ocean region by building maritime engagements with regional and extra regional partners. The Sea Guardian is a variant of the tested MQ-9 platform which allows for greater interoperability with US and allied forces, in a way other platforms do not permit demonstrating the centrality of General Atomics’ products to India’s defense needs. This platform has 4 million hours in combat, will be able to certifiably fly in Indian civilian airspace and can remain airborne more than a record setting forty hours. Additionally, it has a 40,000-hour design life demonstrating its unique resilience. General Atomics maintains that this platform and its proven performance stands independently of and is unaffected by Israel’s Heron sales to India.

The use of the Sea Guardian drones by the Indian Navy will also develop India’s credible capabilities, which is significant for Indian maritime security and naval power projection. Additionally, India faces a several complex security challenges in this domain such as piracy, terrorism, environmental degradation and narcotics trafficking. Maritime domain awareness would allow the Indian Navy an advantage in patrolling the Indian Ocean, and in tackling its pressing security challenges to achieve grander Indian strategic objectives.

Gopalaswamy: The Guardian is a nonlethal variant of the MQ-9 Reaper Drone. What is the likelihood of the US government pursuing the sale of lethal drones to the Indian government, given that those sales will bring US domestic economic benefits, spur job creation in the United States, and help to advance US counterterrorism objectives?

Lall: We cannot comment on US government policy deliberations, but we are eager to support any additional requirements the Indian government may have. Any benefits to the US economy and defense industrial base aside, additional capabilities can further US-India security objectives and cement the bilateral defense relationship.

Gopalaswamy: As US-India bilateral defense trade increases post sale to nearly $19 billion, which jobs and industries, and how many of each, will be supported by the conclusion of this deal?

Lall: At least 2,000 US jobs directly related to the sale, and countless indirect jobs, will be created or saved.

Gopalaswamy: How does this deal improve the US-India security relationship?

Lall: This is the first major defense deal announced since the designation of India as a major [US] defense partner. This is notable for a number of reasons, not least of which is the fact that the US government went to considerable lengths to overcome the “strong presumption of denial,” which essentially implies the policy presumes denial of allowing export, so if exportable it is as an exception to policy related to the transfer of unmanned systems, prescribed by the MTCR [Missile Technology Control Regime].  This is a seminal event as this is the first sale of a US HALE unmanned system to a non-NATO/non-coalition partner.  This should be viewed as a significant step in cementing the US-India bilateral defense relationship.

Mr. J. Neal Blue, chairman and chief executive officer of General Atomics, is a member of the International Advisory Board at the Atlantic Council.

Bharath Gopalaswamy is the director of the Atlantic Council’s South Asia Center. You can follow him on Twitter @BharathGopalas1.