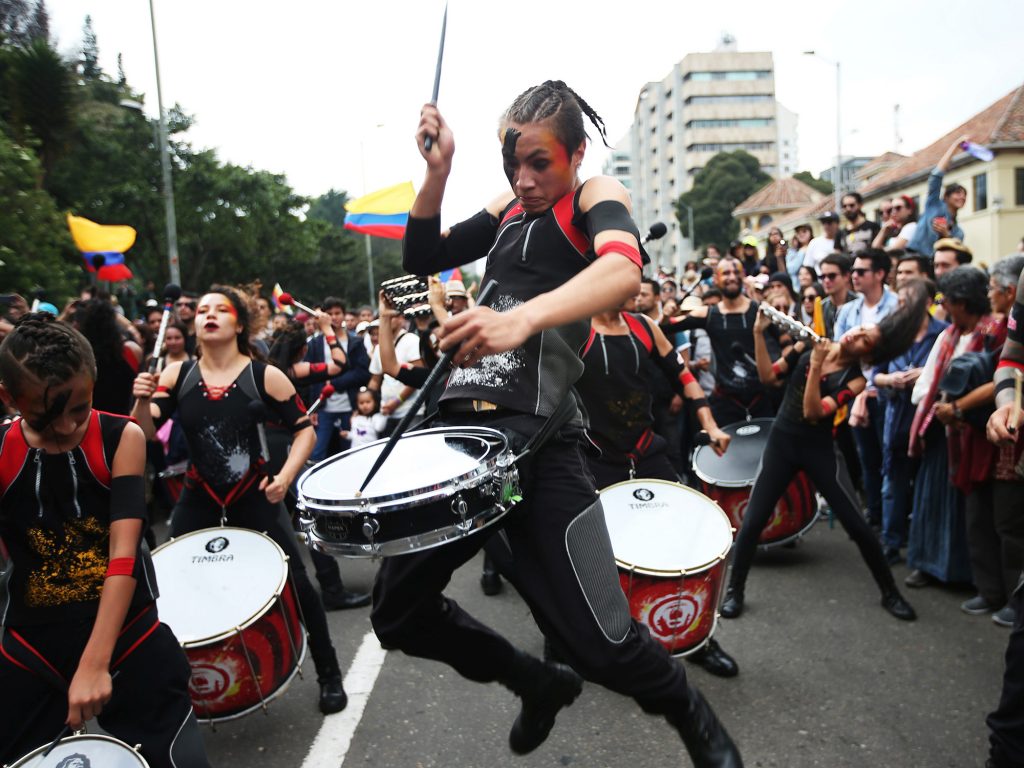 Unprecedented numbers of Colombians have taken to the streets to express their dissatisfaction as part of a national strike called by workers’ unions and student leaders on November 21. A wide range of issues have motivated the protests, including labor reforms, the pension system, tax changes, the government’s market-oriented approach, privatization of public enterprises, corruption scandals, energy tariffs, the implementation of the peace agreement with the Revolutionary Armed Forces of Colombia (FARC), and outstanding demands from previous demonstrations.

Though the protests’ scale, spontaneity, and diversity are unparalleled in Colombia’s recent history, social mobilizations are not unusual in Colombia. The previous administration under President Juan Manuel Santos saw significant opposition to proposed changes to education and public health laws. The backlash from students, teachers, doctors, nurses, farmers, and truckers pushed the government to retract the bills and eventually make meaningful concessions. However, early-on President Santos publicly disregarded the existence of the protests in a televised address to the nation. This blunder emboldened the protesters and was a significant public relations defeat for Santos. Thus far the current administration has avoided making the same mistake; in a televised address after the first day of demonstrations, President Duque told Colombians “I hear you,” but his initial message did not go beyond sympathy and people were left wanting answers.

Most protestors have marched peacefully, but after more than two weeks of protests four civilians have died, more than five hundred people and police officers have been injured, and over two hundred people have been arrested. Notwithstanding the figures, violent rioters are a distinct minority in a much larger mass of peaceful protesters, and yet some law enforcement officials have responded with excessive force too quickly in an effort to control the demonstrations. President Duque, in coordination with city mayors, ought to change the antiriot police’s rules of engagement in order to prevent more lethal incidents.

An opportunity to change course

The Duque administration has had a harder time than its predecessors in getting Colombians to support his government’s agenda. Unlike President Duque’s “legality, entrepreneurship, and equality” motto, former President Álvaro Uribe’s security policy and President Santos’ push for the peace process with the FARC were simpler proposals. As a result, more people understood the agenda of the previous administrations. To garner support within congress and civil society, President Duque should communicate clearly to Colombians why his formula can address the root causes of their grievances. Widespread understanding will lessen the gridlock in Congress and improve perceptions of the government’s performance and reassert his leadership. The latest wave of social unrest has come at a particularly difficult time for the Duque administration. The president has pledged to refrain from using pork-barrel spending (government funds allocated to particular issues so as to please legislators and their constituents, often referred to in Colombia as ‘marmalade’) as a coalition-building tool, which has prevented him from garnering strong support or a coalition in Congress. The recent resignation of former minister of defense, Guillermo Botero, after he faced the prospect of an almost-certain no-confidence vote in early November, revealed the vast divisions between the legislative and executive branches. These divisions are all the more challenging given that Duque’s own party sometimes disagrees with him.

The Untapped Potential of the US-Colombia Partnership

As protests continue—although with waning numbers—the Duque administration must make every effort to balance its electoral mandate with the need to govern with a broader coalition. They must also face an additional challenge that is inherent to the way governments and pressure groups negotiate following major protests. Anticipating the government’s inability to fully deliver on their demands, protesters often broaden their list of requests until the government compromises. Unfortunately, more demands make it harder for the government to deliver, which eventually leads to greater frustration amongst protesters. Moderation on both sides and an early compromise would be in the best interest of the country.

It seems as though President Duque has taken those considerations to heart. On December 3, the president announced that he would be sitting down exclusively with the national strike’s leaders to discuss their demands in the face of another major call for mobilization the next day. The protesters did not back down from calling for the strike, hoping to demonstrate their strength to the government and prevent the momentum on the streets from fading away. On that day, demonstrations were largely peaceful and had a smaller turnout. Since then, the government and the national strike’s leaders have met twice. No compromise has been reached and meaningful disagreements over the agenda, scope, and nature of this national dialogue remain. While the Duque administration leans towards a more general dialogue, protesters insist on a formal negotiation. On December 8, several artists held a concert demonstration reaffirming their message of discontent to the government.

There is well-founded skepticism about the outcome of the dialogue, but, if President Duque succeeds, the experience could enhance public debate, bolster his government’s legitimacy, and strengthen Colombia’s democracy. The stakes are high.