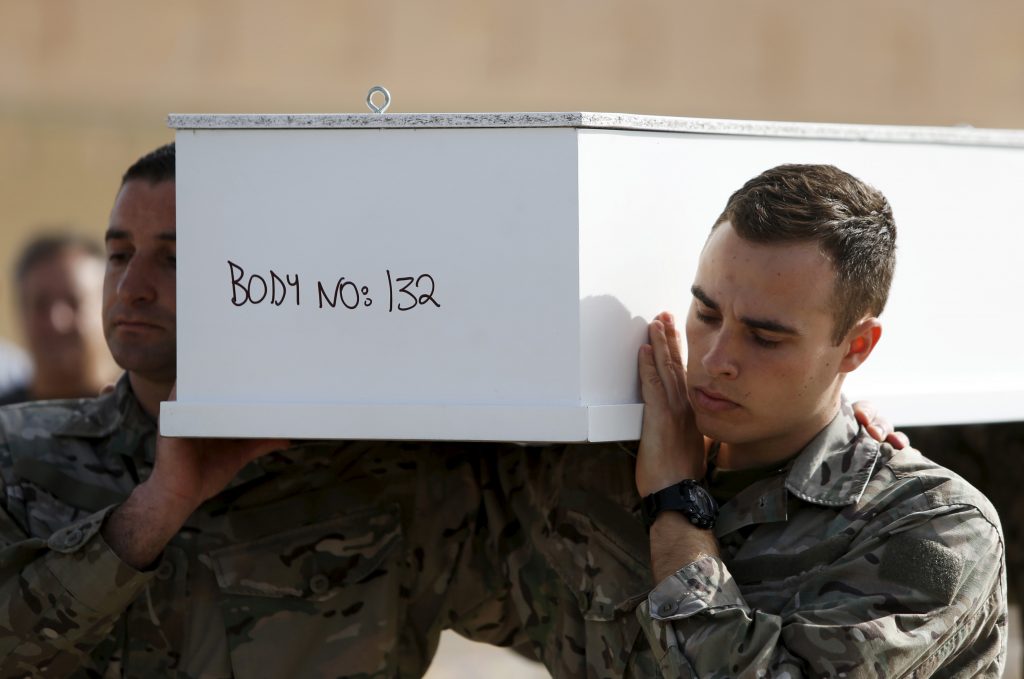 Armed Forces of Malta soldiers carry a coffin with the body of a teenage migrant to an inter-faith burial service at Mater Dei Hospital in Tal-Qroqq, outside Valletta, April 23. European Union leaders who decided last year to halt the rescue of migrants trying to cross the Mediterranean reversed their decision April 23 at a summit hastily convened after nearly 2,000 people died at sea. Public outrage over the deaths peaked after up to 900 migrants died April 19 when their boat sank on its way to Europe from Libya. (Reuters/Darrin Zammit Lupi)

A European commitment to save lives is “backfiring” as human traffickers continue to pack boats full of migrants fleeing desperate situations in Africa and the Middle East, says Atlantic Council analyst Karim Mezran.

Traffickers have exploited instability in Libya to funnel tens of thousands of refugees across the Mediterranean Sea—putting a humanitarian crisis quite literally on Europe’s doorstep.

The voyage is a perilous one.

At least 1,500 people have drowned so far this year while attempting to escape war and poverty on overcrowded ships that are often ill-suited to making the journey to Europe. The death toll in the Mediterranean for 2015 is now well over 1,500, compared with 96 during the first four months of last year, according to the International Organization for Migration. About nine hundred of the 1,500 drowned April 19 when their ship capsized just off the Libyan coast.

European leaders have since committed to sending naval ships to rescue migrants at sea. European Union foreign ministers have promised to double the size of the EU “Triton” mission that replaced a larger Italian naval search-and-rescue operation—Mare Nostrum—in November.

This decision has created a Catch-22 situation, with smugglers packing as many migrants as they can onto a boat that can only travel a few miles because they know the Europeans will rescue them, said Mezran, Resident Senior Fellow at the Atlantic Council’s Rafik Hariri Center for the Middle East.

“The traffickers don’t even need to have ships that can get to Lampedusa,” he said in an interview, referring to the Italian island nearest to the African coast.

The question being asked in Europe is whether the tens of thousands of migrants now arriving off Italy’s coast are an Italian problem or a European one, said Mezran, who recently returned from Italy.

“There is a new realization that if Europe doesn’t act as a team, history will judge it very harshly, as it did when it closed its eyes to stories of genocide—horrible stories—not long ago,” he said.

Europeans have responded to this crisis with caution in part because the flow of migrants has raised concern about terrorists slipping into Europe under the guise of migrants.

Italian Prime Minister Matteo Renzi noted in a recent column for the New York Times that 90 percent of the migrants reaching Italy travel through Libya, a country where the Islamic State of Iraq and al-Sham (ISIS) has put down roots.

“Not all passengers on traffickers’ boats are innocent families,” wrote Renzi. “Our effort to counter terrorism in North Africa must evolve to outpace this menace, which creates fertile ground for human trafficking and interacts dangerously with it. We need to continue political and diplomatic efforts for the reconstruction of Libya.”

But the likelihood that terrorists will enter Europe on a rickety boat from Libya is remote, said Mezran, noting that “if the jihadists come, they will come with first-class tickets and maybe some of them will have European passports.”

European efforts to stem the flow of migrants has been complicated by the chaos in Libya where there are two governments, only one of which is internationally recognized, and where the country’s borders are porous.

The internationally recognized government in the eastern city of Tobruk has little control and “talking to them is useless,” said Mezran.

On the other hand, the authorities in Tripoli are not the officially recognized government of Libya.

Mezran said European governments would need to deal with the powers in Tripoli. “You just deal with those who can help you control the problem. But sooner or later they will ask for recognition in exchange,” he said.

“It’s again the blackmail that [Libya’s late leader Moammar] Gadhafi started,” said Mezran. “Gadhafi wanted the embargo to be lifted so he was blackmailing the Europeans saying that ‘If you embargo me, I will not be able to do anything to stop these migrants.’ The government in Tripoli is doing the same thing saying, ‘If you don’t recognize me or help me, then how can I exercise the authority that I would exercise if you had been supporting me?’”

Karim Mezran, Resident Senior Fellow at the Atlantic Council’s Rafik Hariri Center for the Middle East, tells the New Atlanticist’s Ashish Kumar Sen about the challenges Europe faces as tens of thousands of migrants flee Africa. Excerpts from the interview:

Q: What’s behind the surge of migrants?

Mezran: This has been going on for a long time. In the late 1990s and early 2000s, under the Gadhafi regime, there was the same issue of thousands of migrants coming from Africa fleeing political repression, starvation, and economic issues. There isn’t one issue, there are many situations that force these migrants to move north and run the risk of this terrible journey.

There is an exploitation of this drama. Organizations lure these migrants [and] make them pay huge amounts of money upfront that finances criminal organizations. This network should be confronted and defeated because it has created the modern slave trade.

Q: Where are these migrants mostly coming from?

Mezran: They are coming from all over. They are from Eritrea, Ethiopia, Sudan, Niger, Congo, and Nigeria, but now we’re also seeing lots of Syrians and Iraqis.

Q: Why is Libya the point of exit?

Mezran: Libya is unguarded and completely destabilized. There is very little or no control over its borders so it is very easy to gather the migrants. Open-air camps are organized where migrants are assembled and then pushed up north thanks to the corruption of local authorities and the complicity of tribes and local militias.

The European reaction has been to send ships to make sure that these migrants don’t die. This has created a Catch-22 situation because now the smugglers put as many migrants as they can into a ship that can only travel a few miles because they know the European ships are there to save them. The traffickers don’t even need to have ships that can get to Lampedusa.

The attempts by the Europeans to stop the migrants are backfiring because now they have to save them and bring them to Italy. This has ignited a fiery debate in Europe. What do you do with the migrants once you rescue them? Is this an Italian problem or a European one?

Q: Is this an Italian problem or a European one?

Mezran: It is definitely not an Italian problem. These migrants are simply coming to Italy because it is closest. They want to go to Germany, England, and France. Only a small part wants to stay in Italy.

There is a strong push to make this a European problem and [use] European resources to absorb these migrants. They are talking about numbers that in absolute terms are ridiculous. We’re talking about fifty to sixty thousand people, which for a continent of three hundred million people should not be a problem absorbing.

Some groups are trying to claim that this is an existential threat for Europe, which it is not. It is a humanitarian and economic problem that can be resolved.

Q: What challenges is this flood of migrants posing to Europe?

Mezran: It is a security problem only in so far that we don’t want to get criminals on land. There is no security threat, as some have claimed, that the jihadists would come in with the migrants. If the jihadists come, they will come with first-class tickets and maybe some of them will have European passports.

But it is an economic and humanitarian problem that challenges the capacity of Europe to absorb people who are running away from their state of depravation.

Q: European officials are considering a plan that would involve military intervention against human traffickers. Can this work?

Mezran: The Europeans are debating whether we should bomb the ships when they are in the harbor. First, you don’t say such things. You just do it. Second, this is not a military war; this is an intelligence job. You have to expand your network of intelligence operatives in Libya. They will tell you where these ships are, and then you send special operations troops to blow them up. If you announce to everybody that you will bomb the boats, they will just hide the boats somewhere else.

Q: The EU doesn’t recognize the government in Tripoli, so whom is it dealing with on this migrant issue?

Mezran: That is part of the problem. The [internationally recognized] Tobruk government [in the east] does not control anything. So talking to them is useless. The Europeans should engage those who are running Tripoli. But even in Tripoli the situation is not very clear. The coast is not controlled 100 percent by the Tripoli government.

Q: By talking to the Tripoli government are you giving it de facto recognition?

Mezran: I don’t think so. You talk with the powers in the territory. That does not mean you are giving them full recognition. You just deal with those who can help you control the problem. But sooner or later they will ask for recognition in exchange.

It’s again the blackmail that Gadhafi started. Gadhafi wanted the embargo to be lifted so he was blackmailing the Europeans saying that ‘If you embargo me, I will not be able to do anything to stop these migrants.’ The government in Tripoli is doing the same thing saying, ‘If you don’t recognize me or help me, then how can I exercise the authority that I would exercise if you had been supporting me?’

Q: Give that scenario, is it in the Libyan authorities’ interest to keep this crisis going?

Mezran: For now this is very convenient for them. But the authorities in Tripoli are also not strong enough to take on the criminals who are conducting the slave trade. Nobody on the ground has an interest in stopping it because it is a money-making machine.