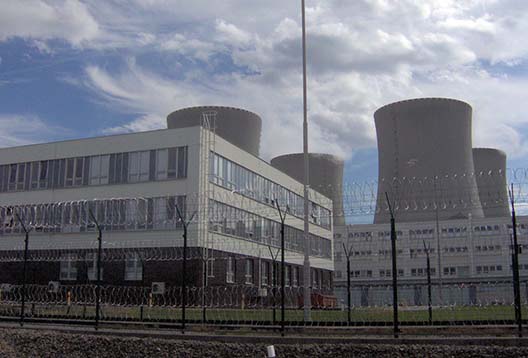 Ukraine Crisis Shows Eastern Europe at Risk Not Only for Gas, But Also Nuclear Power

As European nations decide how staunchly to oppose Russia’s attacks on Ukraine, they have been pondering uneasily the prospect that Moscow could cut off the Russian natural gas supplies upon which many of them depend. Foreign policy specialists across the transatlantic community have scurried to promote ideas, such as a US promise to export gas to Europe, to reduce Russia’s leverage.

Some bad news for this effort is that, across much of Eastern Europe, from Bohemia to the Black Sea, Russia holds a second ace in the energy politics game: nuclear fuel. Five countries – Bulgaria, the Czech Republic, Hungary, Slovakia and Ukraine – rely almost entirely on Russian state-owned companies to fuel their nuclear power plants. For these 80 million Europeans, the Russian state provides services essential to some 42 percent of electricity production.

Europe’s dependence on Russian gas is deepest in the same zone. Four of the five nuclear-dependent states are among at least nine countries that rely on Russian gas pumped through Ukrainian pipelines for about three-quarters of their total gas supply, Atlantic Council Senior Fellow John Roberts wrote last week. They, along with the fifth country, Ukraine itself, are especially vulnerable to any break in Russian gas supplies, whether accidental or intentional, that could occur amid the spreading conflict over eastern Ukraine.

The Europeans’ nuclear dependence on Russia varies in small ways. Ukraine and the Czech Republic do some of the work of making their nuclear fuel, notably mining and milling the raw uranium. But they rely on Russia’s national nuclear-fuel manufacturer, TVEL, for high-tech parts of the process, including enrichment of the uranium and its fabrication into fuel rods for use in Russian-designed reactors. TVEL is a wholly-owned subsidiary of Rosatom, Russia’s state-owned nuclear power conglomerate.

Turkey, Belarus, Slovakia, and Hungary also rely on Russia for other nuclear services, such as designing or building new power plants. On April 1, Hungary signed a 10 billion Euro agreement with Russia to expand its Paks nuclear plant. Turkey recently received $1.39 billion dollars from Russia to build its first nuclear power plant in Akkuyu. Belarus finalized a $10 billion contract with Rosatom in 2012 for the supply of two reactors for the Ostrovets nuclear power plant.  Slovakia also has committed to to a budget increase to complete the Mochovce nuclear plant, with two Russian reactors. Eastern European investments in new Russian reactors is likely to increase their future dependence on Russia for nuclear fuel.

The pattern of Europe’s nuclear dependence on Russia also highlights the alternative energy policies chosen by some countries years ago.  In the 1970s, Romania joined its neighbors in building nuclear power plants, but chose, despite Cold War pressures, to use the Canadian CANDU reactor design. Romania still relies on Canada, rather than Russia, for its fuel.

Poland scrapped its nuclear power plans after the calamitous explosion at Ukraine’s Chernobyl nuclear power plant in 1986, and now is pursuing plans to build two plants in Poland, which would not use Russian reactors. Poland also could invest in the project by the three Baltic states to build a plant with Hitachi-GE Nuclear Energy at Visaginas in Lithuania. That plant would replace the single nuclear generating station in the Baltic states, the Chernobyl-style Ignalina plant, which Lithuania closed as a condition for entry into the European Union.

Addressing Eastern Europe’s nuclear dependence on Russia will require some of the same strategic needs as the campaign to reduce Europe’s gas dependence: diversification of supplies, time to achieve it, and funding.

As the Obama administration presses the European Union to take a tougher stance against Russia over its seizure of Crimea and its attacks in southeastern Ukraine, it recognizes the problem of Europe’s dependence on Russia for gas. The US special envoy for international energy affairs, Ambassador Carlos Pascual, has joined other specialists and political leaders in urging a spate of pipeline-building in Europe to inter-connect national supply grids and thus build a freer gas energy market on the continent.

Pascual also promised this month to speed US exports to Europe of liquid natural gas, and other US policymakers, such as Senator Mark Warner (D-VA), have urged the administration to do so even faster than it has planned. But this campaign to build gas independence from Russia will take years, because of the need to build pipelines and liquid natural gas shipping terminals.

Diversifying Eastern Europe’s nuclear fuel supply might require ten or more years , but the experiment has been tried. In 2005 Ukraine launched a project testing Westinghouse as a supplier of fuel assemblies for its Russian-designed reactors, and in 2008 Ukraine signed a fuel supply contract with Westinghouse. That project ran until 2010 when Ukraine signed a long-term contract with TVEL, but this month Ukraine agreed to buy as much as 25 percent of its fuel until 2020 from Westinghouse. The Czech Republic also previously received nuclear fuel from Westinghouse, but in 2006, TVEL won the new contract.

Unsurprisingly, TVEL has said that the nuclear energy business should remain above politics and that it will continue as usual. But Gazprom, the Russian state gas supplier, has said much the same, as recently as this month, stating Russia is and always will remain a reliable gas supplier. Yet Russia cut supplies to Ukraine in January 2006, in 2008, and in January 2009. If policymakers in Washington, Brussels, and across Europe hope to build a unified transatlantic political front against Russian President Vladimir Putin and his project to expand Russian control into Ukraine and perhaps other East European states, it will have to begin working to also reduce the region’s nuclear dependence on the Russian state energy corporations that help keep Europe warm and well lit.

Kathryn Sparks is a program assistant for the Atlantic Council’s Energy and Environment Program, focusing on energy security and nonproliferation.